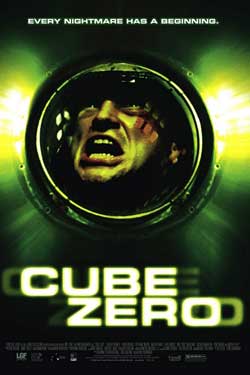 A young man whose job is to watch over the Cube endeavours to rescue an innocent woman trapped in one of its rooms.

“Cube Zero“, the 3rd film of the cube franchise takes us back to before the first film. We find the cube already in place with its usual range of captives being subjected to its complex labyrinthian construct. As we begin with a fellow who happens upon a booby trap, his joy at thinking he is being sprayed with water soon turns into a flesh eating liquid that caused him to melt like a Hershey bar. It would seem we’ve been reintroduced to cube again but as we pull away we find that now we are in a control room that monitors the activity within the cube.

Our 2 technicians are Eric Wynn (Zachary Bennett) and Dodd (David Husband), a pair of blue collar workers who have been tasked with the objectives laid out for them. Monitoring, interacting if requested, and recording the activities, seems to be their primary function in a dark industrial room surrounded by file cabinets. 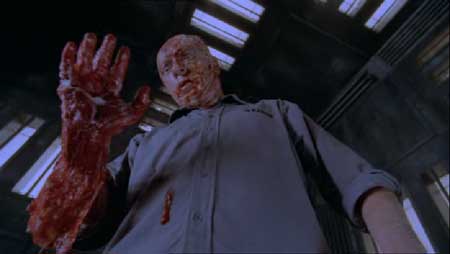 Dodd the older of the 2 seems to understand the critical nature of being “too inquisitive” into the functions of the cube. His advice to the younger one asking questions (Eric) is to drop it and leave it alone. In fact one of the former workers Owen who never returned from his vacation is suspected of being terminated for this same level wanting to learn more about what it is they do. “Don’t get involved” is the advice Dodd gives to Eric. Eric appears to possess a certain chess playing brilliance while Dodd is more content being a model employee. The 2 of them monitor the sessions thru computer monitors hung above. 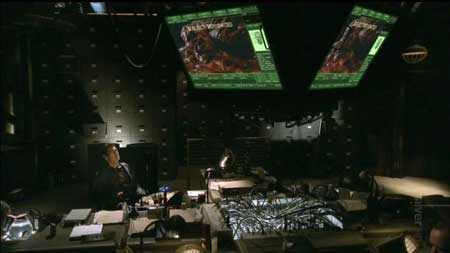 In this offering of the cube enigma, we are back again with the old version of the cube construct, slightly even less refined than the first. The testing of captives is still ongoing with much of the unusual fan fare that goes with it. In one scene we see a recent captive flashback to her abductions by a small band of soldiers who possess computer like eyes. This is followed by a brainwashing session flashback of one of being drugged to forget her memories . 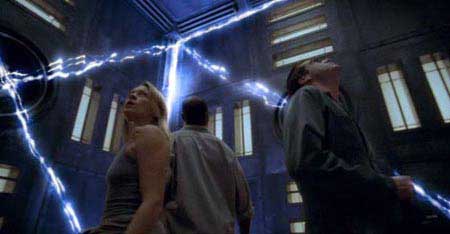 It was clear in this round that the filmmaker wanted to give us a different perspective of the cube operation. By the reactions of the workers, we get the sense that this experiment has been going on for some time bearing similar patterns. They even mention the clean sweep that occurs once the cube realigns to zero position.

While the struggle continues on through out the cube, another one arises outside the cube. Eric begins to feel compassion for one of the captives, Cassandra Rains (Stephanie Moore). Even with Dodd’s warning, Eric feels compelled to do something when he discovers that her file is missing a consignment sheet. Convinced that she wont make it out on her own, Eric does a brave, but stupid thing. He takes the elevator down to the cube entrance and enters it. 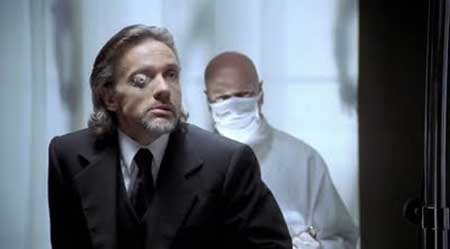 Now I don’t need to spell out every detail to tell you that what “Cube Zero” initiates is the interaction and structure outside of the cube. When Dodd is visited by 3 upstairs employees he encounters a man by the name of Jax (Michael Riley). His partners are supercharged analysts who have keyboard electronics wired to their fingers. Jax, himself sports an odd electronic eye attachment. The point being, that the higher you are in the program, the more integrated you are with the system.

Director Ernie Barbarash sets out to give us some grounding behind the cube universe. We find that 1, the cube is underground and on earth (in case you were wondering), 2 it’s designed to test bio-weapons upon the captives and 3, the captives are “mostly” folks who either have done something that warrants being put in here or just deemed dispensable by the powers that be. 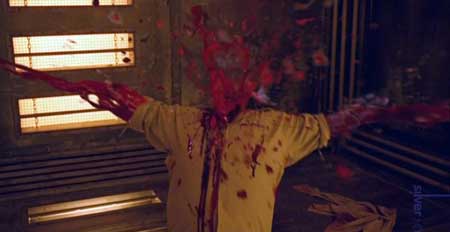 It is clear that the organization is based in evil intentions that show no compassion in torching a human being or trying out a flesh eating bacteria on one of them. We never do get to meet the leaders, but like most corporations. leaders could be several levels deep. “Cube Zero” takes us back to the beginning years of the testing, which as we know is taken into other realms. The cube in this film is older, less high tech and still using older computer gear.

What is left to a mystery are the employees, their soldiers and how it all initially came together. Maybe there will be a prequel…prequel, that might surface some day..who knows. After spending time with all 3 films, I believe the 4th should be an all-encompassing film that begins with the initial creation and then fast forwards into the final usage of it. 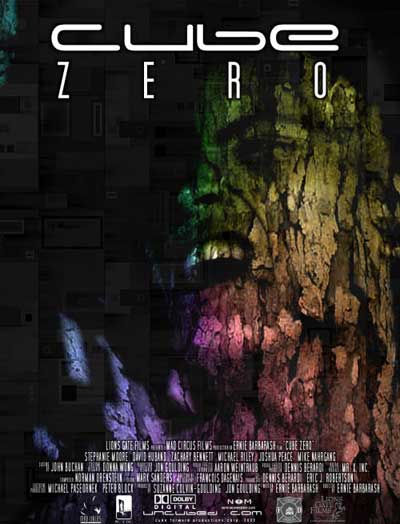 “Cube Zero” would be odd to watch as just a standalone. It serves better as a 3rd film to watch in sequence. I know fans were disappointed with his entry on some levels, however I have to lump it into the trilogy as a part of a larger picture. For that reason I’m a fan of the series and the parts that go into it. 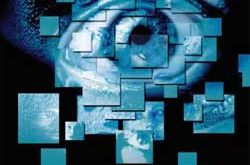