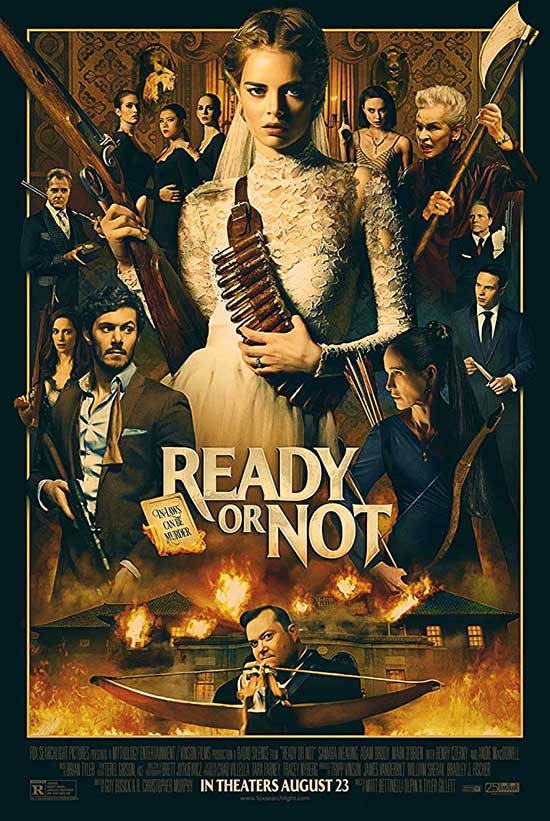 A bride’s wedding night takes a sinister turn when her eccentric new in-laws force her to take part in a terrifying game.

Grace and Alex are traditional newlyweds but the ceremony given by Alex’s wealthy family is highly unorthodox. The new couple and her in-laws must play an ancient game of dark comedy, gore, and revenge. The stakes are life and death.

(This review contains spoilers.) The year is 1983. An antique tarot-like poster of a smiling devil appears in a rich mahogany den with the opening credits: “Take a risk, gain the advantage” the sign reads below a ghastly face. Two 10-year-old boys are running through the house playing hide and seek, but this is no ordinary game. Soon we see masked family members run in and shoot arrows into a yelping, dying man in a tuxedo.

This is a fitting intro to the horror/comedy/thriller, “Ready or Not” (2019). As time fast-forwards to present day, we find ourselves on the same property at a posh yet insecure feeling wedding of Grace (Samara Weaving) and Alex (Adam Brody). Like some horror films, it begins as a normal movie without magic or macabre elements. They start to have early sex in a far off room as most newlywed couples on film do and are interrupted by a starkly frightening aunt (Nicky Guadagni). That’s an important scene because this film is not about the love of a couple on their wedding day, instead it’s about the inlaws cutting and pounding the new bride’s flesh to death before sunrise (Yep, that’s pretty much true). In this family, there is a curse and if that curse runs it course without a sacrifice, all the family will die. So when we realize this, the horror sets in along with the thrills. But why the hell would the in-laws want to kill the new member of their family? That’s where the plot gets a little stupid, in my humble opinion. Allow me to explain:

Alex’s extended family are a “gaming dominion.” The great great grandfather made his fortune beginning with a modest printing shop which extended into sporting goods and then professional sports teams. His gaming company made him a highly wealthy benefactor. It is explained he “always wanted more.” Through a long diatribe about grandfather studying a mysterious puzzle box “at sea” the Patriarch of the family (Henry Czerny) explains to the couple and extended family of about 10 total they are going to play a game. Yes, that’s what he takes a god awful long time to say. Grace gets to pick the card and hide and seek is the ominous selection. Everyone in the family gasps. This horrendously long setup nonetheless sets the stage for this game most of you saw in the trailers. If you thought you saw tropes of cat and mouse horror like “You’re Next” and “The Strangers-Prey at Night” you are correct! If only this incarnation of the trope was half as horror and half as suspenseful as those gems. Then again, there is that dark comedy component, and luckily it’s done pretty damn well.

The low point of “Ready or Not” is the backstory. Most friends and colleagues I’ve spoken with have agreed with me on that. I think if I went into it thinking it was dark comedy more than horror I would have excused it. In fact, there is an event in the climax that made me forgive most my backstory criticisms but until then it was laborious trying to relate. I mean, how the hell could this ever happen? I’m one of those horror fans that prefers the real terrifying to the magical make-believe sort. But maybe that’s just my bent. Overall, despite my criticism of the backstory, I enjoyed this movie quite a bit.

The gore was very well done. The scene when Grace is pushing between rod iron decorative fencing almost caused me physical pain to watch. It rips through her back. Like I said good gore. Another scene of well done gore was when a family member is accidently shot in the head and half her temple is ripped out. She dies slowly, it’s quite subtle yet disturbing as well. The matriarch, played by the award winning actress Andie McDowell, shows no remorse. This is one fucked up family.

The pace picks up from there and as the classical music violins saw away, it becomes more like a bride’s “Home Alone.” Alex is probably the biggest fool and idiot husband ever portrayed. Is he trying to console here and get her out or is he trying to lead her to be caught by his family? She can’t be sure and neither can we. I hated his character.

This is a dark comedy above all else. I only wish there was more comedy reminding me of that. The result was I went through the movie expecting a spooky vengeance cat and mouse horror and that hunger was never satisfied. I might put it more in the realm of “Ash vs. The Evil Dead.” I think if you are a fan of that sub-genre, this will appeal to you. “Insidious” or “Hell-Fest” horror lovers might not like it as much. Unfortunately I fall in the latter camp. At any rate, let me bring these mixed feelings to a conclusion:

I’ve left out so much, I could have added more to show you the strengths and shortcomings of this film. I will fast forward to the final act with you however, as I close, and note the hilarious way the family explodes like blood bombs when they lose the game to Grace. She eludes them until dawn and that is something I cheered for. The exploding family made me realize this is a dark comedy first and foremost. In a year where not much came out in my kind of serious horror, at least this was partial. It’s not a scary movie at all but is has good gore and intermittent dark comedy. The backstory is contrived and unoriginal but I don’t think the movie suffers from that too much, what did you think? I gave this one a 7/10.