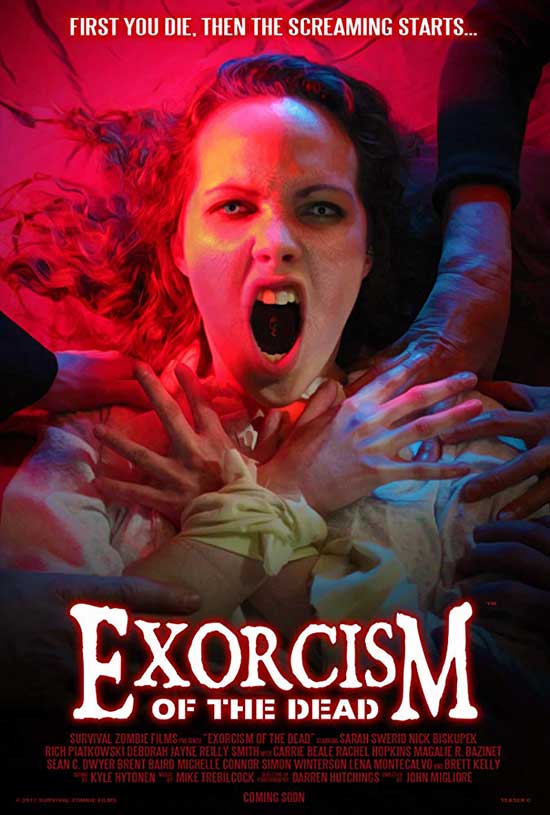 Candace is possessed by a demon, and her family has tried everything to save her. Could her last hope be a priest with his own dark secrets?

“I honestly see why Orson Welles ate his fat ass to death.” Superbad (2007).  Surprisingly, that’s what comes to mind when I think about the current state of the exorcism genre, and it’s strangely appropriate.  Bear with me here, this is going to make sense…I think.

I’ve felt for a long time that exorcism movies have exhausted their viability in the horror genre.  They came out guns blazing with the first entry, The Exorcist (1973), and have been in a steady decline ever since.  In Superbad, Evan, after hearing Seth complain about his non-existent love life after his first girlfriend, says “You’re like Orson Welles” whose first (actually second) feature, Citizen Kane (1941), could be the best film ever made, with all follow-ups having the insurmountable task of trying to measure up.  So, what I’m saying is the exorcism genre is equivalent to the love life of Seth from Superbad, which parallels the film career of Orson Welles, obviously…. This worked out better in my head. 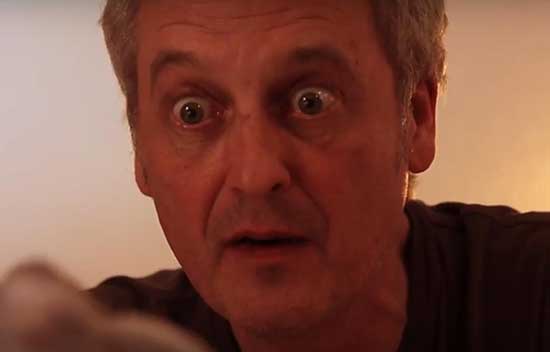 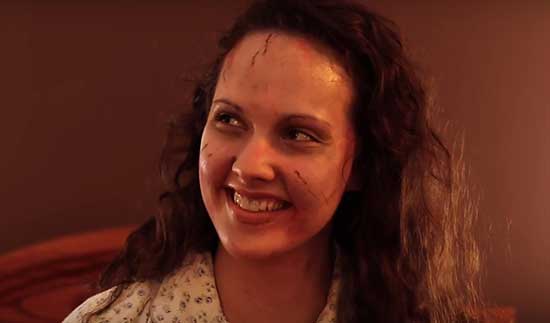 One positive thing for exorcism films, at least for those making them, is that they can be cheaply made, with limited actors, sets, etc.  But low-budget horror is a specialty of writer/director John Migliore, as well as the production company Survival Zombie Films, who has starred in, written, and directed many inexpensive indie horror movies.

But despite the insurmountable odds Canada’s Exorcism of the Dead (whose IMDb rating dropped from a 3.1 to a 2.9 overnight) had against it before filming even began, the creators were able to put together a respectable and comprehensible horror flick.

The movie begins with a family writing a letter to their local Archdiocese of the Roman Catholic Church asking for help with a possessed younger member of their family.  The family has exhausted all other medical reasons for her condition, they aren’t really believers in the supernatural, blah blah blah, all the usual things we usually SEE the family work through in most exorcism movies that help the audience grow with the family and understand their stress and confusion. 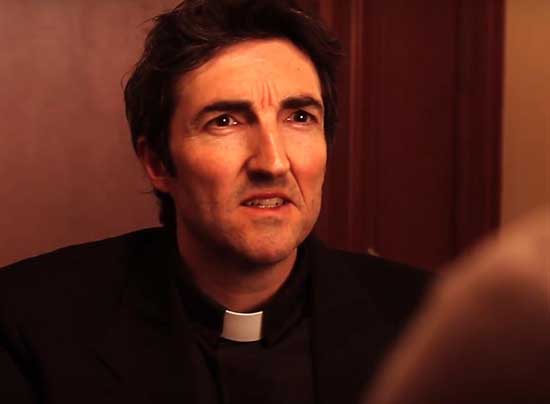 So, you can predict what the next scene is…a baby being killed by an unidentified woman, who’s not connected to the family in any way, in her underwear.  I’m not kidding.  It’ll make sense later, kind of.

A priest named Father Abuna comes to the family’s house three months later (which is addressed later in the movie) played by Nick Biskupek, whose been on the TV shows Paranormal Witness, Paranormal Survivor, AND Paranormal 911!  This poor guy couldn’t escape the paranormal if his life depended on it (and it might).  He’s a veteran actor who was also in the Witches of Salem (2019) mini-series on the Travel Channel, which I have not seen but have heard good things about, and did a good job carrying the film.

This is where I noticed something odd.  Father Abuna is wearing the collar, a black shirt, and khaki pants.  I grew up Catholic and I have never seen a priest wear anything other than black pants with his collar.  Even if you aren’t Catholic, most people know the traditional outfit of a priest, all black and the white collar.  Even if the budget is tight, no one has a pair of black pants the guy can wear?  It’s just a small detail I immediately picked up on and couldn’t stop focusing on.

This is where the movie adds a refreshingly different element to the exorcism genre, one which l swear I did not anticipate by the title.  The possessed girl is dead.  She died during the three months between the letter being sent and Father Abuna arriving, but her body is still being used as vessel by the demon possessing her.  This inventive twist, coupled with a unique ability of the demon, was an interesting revelation that I don’t remember seeing before, adding a welcomed element of originality to an exorcism film.

Candace, played by Sarah Swerid in her first feature length performance, is deceased and catatonic for most of the film, aside from periodically awaking to spew out the usual demonic exposition, accompanied by a couple laughable physical assaults on Father Abuna and her Uncle Philip, who is one of two other main characters in the film.  Apart from the assaults, which were most likely the fault of the director and the budget as much as it was the fault of the actress, Swerid did well for the most part as the possessed.

The demon also seems to randomly turn on the TV during breaking news broadcasts of murders that are occurring that same night while Candace is catatonic, which obviously were shot by someone who does not watch the news.  Almost everything about the news scenes is wrong and slightly cringy, with by far the best part about them being the five seconds of commercial for Patriots of the Caribbean Dive Shop (“Arrrr!”) that preceded one of them.

The movie tries to connect the demon possessing Candace to an old Ethiopian evil entity a la Exorcist II: The Heretic (1977), and the prequel(s) Exorcist: The Beginning (2004), and Dominion: Prequel to the Exorcist (2005), whichever of the 2 almost exactly the same Exorcist prequels you’ve seen), and, what do you know, it fails just the same and never actually follows through and finishes with that sub-plot.

Eunice, Candace’s mother, has her own misplaced scene which surprisingly has a beneficial conclusion for the audience.  We get to see a Catholic priest strike a 50 plus year old woman to the ground…and then peace out.  Eunice has some type of nervous breakdown or is briefly possessed by the same demon possessing her daughter, it isn’t entirely clear, and because Father Abuna believes that there isn’t time for this nonsense, drops her like a sack of potatoes.  After hitting her, she falls to the ground, seemingly out cold, and he doesn’t check on her to see if she’s alright or anything, he just immediately dips.  It was hilarious. 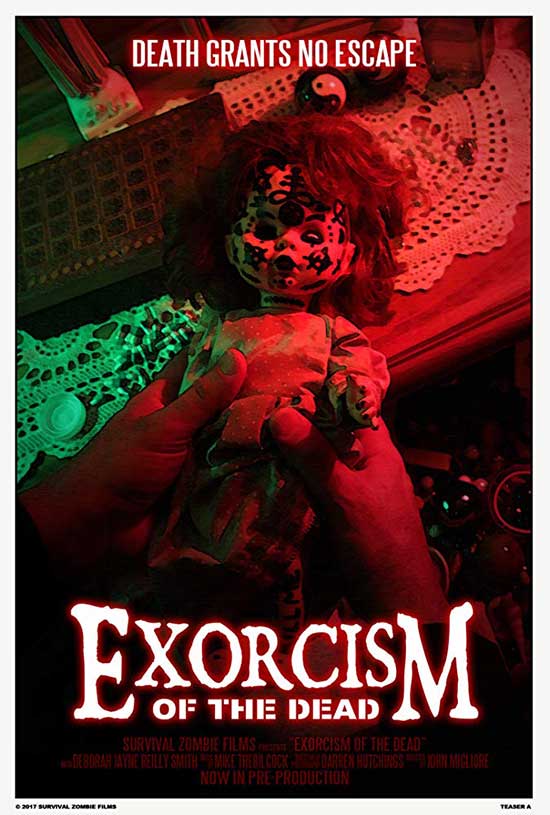 I don’t want to give the entire plot away but I have to give credit where credit is due, the originality injected into the stale dying exorcism genre gave this movie a pulse, culminating into a clever way to take an exorcism movie out of a bedroom and give it life and energy, which beneficially allowed for some blood and gore scenes.  However, these scenes were noticeably limited by the low budget.

JMS Special Effects is a very capable special effects team, working on Land of the Dead (2005), American Psycho 2: All American Girl (2002), and currently on the untitled new Saw project due out this year, but its work was weak here, which can only be explained by the miniscule budget.

The film’s production also could have benefited from a fight choreographer because, and I’m going to have to check my notes, I think this movie may have produced the weakest punch to the face that knocked out a person in the history of life, and no, I’m not referring to when the priest molly-wopped a 50+ year old woman, this is an entirely different molly-wopping altogether.

On top of that, the audience is also rewarded with not one, but TWO brief priest vs. civilian fights, in one of which Father Abuna gets a piece of his own medicine and is knocked out cold.  Now that I think about it, this priest is pretty violent, he not only sucker punches the mother, he tussles with the uncle twice.  Maybe this is a nod to Father Karras in The Exorcist (1973) who was a former Golden Gloves boxer in the movie, but I don’t remember Father Karras hitting anybody.

All joking aside, this was a decent movie.  As I said before, it brings something refreshing different to a stale genre.  It was original and clever, which is very hard to come by these days in ANY movie genre, yet simple and much more deserving than its 2.9 rating on IMDb.  This movie isn’t for everybody, especially not for those who aren’t hardcore horror hounds, but those who are should check it out.  And if exorcism movies are your thing, it’s a must watch for the original inventive twist alone.