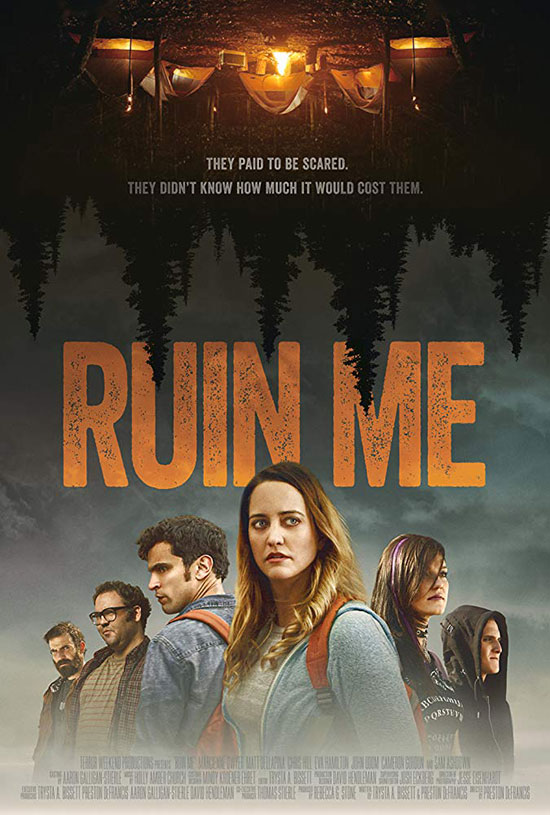 Alex accompanies her boyfriend and a group of other people on a trip to the Slasher Sleepout even though she isn’t really into horror films and is just trying to be a good girlfriend. Unfortunately, once they get there they discover that the scares are for real and they may not make it out alive.

I’ve always wanted to do the horror camping trip thing like the one in Ruin Me just to see how well I would do but I haven’t had the chance to do one yet. After watching this movie though, I may have changed my mind as I could see what happens in it actually happening to me (after all, I do have the worst luck in the world). I thought that Ruin Me was a pretty cool little flick that kept me entertained (and guessing) until the very end and I am glad that I got the chance to check it out. 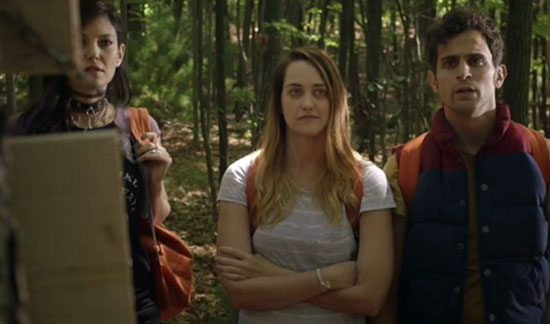 The premise is simple but that’s fine because it works. We have a group of people who go out in the middle of nowhere to be a part of a horror-themed camping trip where hired actors show up occasionally, to scare the pants off of them. Unfortunately, though, this time around it appears as though the killers lurking in the woods are real and it isn’t long before the bodies start piling up as a result. What is going on here? Are the people lurking in the woods really escaped mental patients who enjoy killing anyone who they come across or is there something more sinister happening? I’m not saying as part of the fun is trying to figure everything out before all is revealed but let’s just say that I had a great time trying to do so and I think that a lot of viewers out there will feel the same way. I thought that Ruin Me was a fun little flick that was interesting and entertaining as hell and I thoroughly enjoyed the time that I spent watching it.

One of the biggest strengths of the film is without a doubt its cast. Marcienne Dwyer really shines as Alex and you can’t help but root for her even though she has her share of problems (such as being a recovering addict). I thought that it was a nice touch having her not be a horror film person as she doesn’t really know anything about them (such as the rules or tropes) so surviving her ordeal is a bit more challenging for her than it would be for a hardcore horror fanatic.

I also liked Matt Dellapina as her insecure boyfriend Nathan (who is constantly worried about their relationship) and thought that he was a great character. My favorites though, were without a doubt Evan Hamilton (who is smoking hot) and John Odom who play the goth couple Pitch and Marina (though I will admit she has one of the stupidest lines ever when she is telling Alex how excited she is about being at the Slasher Sleepout and asks a very disturbing and personal question). I thought that they were both awesome and while I have a feeling that some viewers will detest Pitch I dug him and thought that Odom was excellent in the role. I also liked Chris Hill as Larry too as he did a great job playing the painfully awkward guy that tries way too hard to be funny much to the annoyance of the other characters (I know someone just like him in real life that sort of looks like him as well). All in all, the cast did a fantastic job and helped bring his or her respective character to life.

I also liked the fact that there are a lot of twists and turns during the course of the movie and I had a blast trying to figure out what the big pay off was going to be. It isn’t clear who is killing off the characters at first and a big part of the fun is trying to figure it all out yourself before the filmmakers reveal everything in the end. Speaking of the ending, I thought that it was quite brilliant, and I didn’t see it coming. There are two twists toward the end and I thought that both worked perfectly (one of them was obviously inspired by a certain 80s slasher flick that I can’t mention here because it would most likely ruin the surprise for you). You can tell that the people behind it put a lot of thought into these twists and even though some people may not particularly care for at least one of them, I personally thought that they were both quite awesome.

I really enjoyed Ruin Me and had a lot of fun with it. I thought that it was intriguing and original, and just well-written in general. It will definitely keep you on your toes and keep you guessing until the very end, and unlike some movies the payoff is worth it. If you’re in the mood for something a little different then check it out as it is a winner.