“Doctor Gene Tuskin works with troubled children, perhaps none more troubled than Regan MacNeil, who suffers from bad dreams and repressed memories. The memories she represses are of the time she was possessed by a demon. Doctor Tuskin’s invention, a device that hypnotises two persons and links their minds together, reveals that the demon, named Pazuzu, still lurks within her. It is desperate to emerge again and wreak havoc. Meanwhile, Father Philip Lamont is ordered by his cardinal to investigate the death of Father Merrin, the priest who died while performing an exorcism on Regan. Father Lamont undertakes his task reluctantly. He feels unworthy of his assignment. He also feels that Evil is literally an entity and that this entity is winning the battle over Good. His investigation takes him to Africa where he locates another recipient of Merrin’s exorcising and learns something fascinating and terrible about locusts.” (courtesy IMDB)

The Exorcist (1973) became instant legend, making it one of the most popular horror films of all-time. The film is efficiently (if not brilliantly) directed by William Friedkin, who takes his time about setting up a family’s normal suburban lifestyle in a nice part of Washington, before destroying the peaceful middle-class oasis by introducing the demonic possession of the young daughter Regan (Linda Blair), a girl on the brink of puberty. 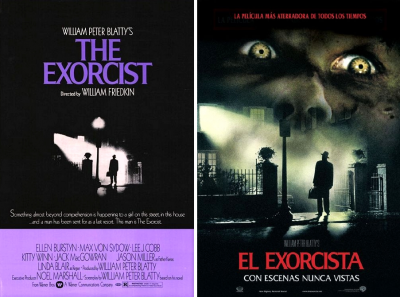 It begins with strange noises upstairs (rats?) and goes on quietly enough, if portending the imagery to come, like Regan urinating on the carpet during a dinner party. Symptoms of the demon’s entry start to snowball: Regan’s face and body is hideously contorted; She levitates; She vomits green mess; Her head performs 360-degree turns on her shoulders; She speaks different languages in a strange gruff voice (that of veteran actress Mercedes McCambridge); She masturbates violently and painfully with a crucifix; She abuses the clergy; She kills one of her mother’s friends. In symbolic terms, this is what all suburban mothers feared their teenage daughters would do in the mid-seventies, a period when the alienation of children from parents was the number one sociological talking point in the United States. Thus the film would simultaneously attract teenagers (delighted in seeing one of their own get away with it) and parents (their worst fears confirmed). The film could hardly fail!

Graphic scenes of deformity and sex had been done before in horror films, but such films were mostly considered not to be reputable, not made by major studios with huge budgets to spend on effects. For the mainstream audiences, The Exorcist was something new.

Intellectual Catholics may have been amused to observe that The Exorcist was a perfect modern example of an ancient heresy, the Manichean, in that it implies that the struggle between God and Satan is a battle between equals, and sees the human body as the potential temple of Evil. All of this would be more repugnant if one could take it seriously, and it’s rather disturbing that a largely agnostic audience should so readily accept the proposition that absolute Evil exists in the world. This is always a dangerous view, as it leads to the idea that pogrom as virtuous, and in its determinism it lessens any need we may feel to change ourselves (“The devil made me do it.”).

In The Exorcist, Evil actually has primacy over Good. One priest is killed, the other is virtually powerless and only succeeds by taking the demon into himself while committing suicide. The film is too simplistic to be first-rate, but the entertainingly nasty effects by makeup maestro Dick Smith were successful. So too was the moody cinematography of the sinister prologue in Iran, and the romanticised light in which the exorcist himself is largely seen.

Consensus opinion holds that Exorcist II The Heretic (1977) was a disastrous sequel. Consumer Guide’s The Best, Worst And Most Unusual Horror Films puts Exorcist II The Heretic into the ‘Worst’ chapter. I therefore expect to be lynched for suggesting that John Boorman‘s sequel was more interesting than the original film. Boorman had already demonstrated his intellectual ambition and his tendency to over-reach with Zardoz (1974). He did much the same here.

Four years later, Father Lamont (Richard Burton) is investigating the death of Father Merrin (Max Von Sydow), the exorcist of the previous film. Regan, now apparently cured, is nevertheless still disturbed and undergoing psychiatric treatment. Furthermore, Regan learns that she now has healing powers. Through an electronic device that allows a partial mind-meld, Father Lamont finds that Regan is still in intermittent contact with her ex-possessor, who turns out to be Pazuzu, the African locust god. In a complex story, Lamont goes to Africa, has visions of Pazuzu, meets a doctor (James Earl Jones) who was once possessed by Pazuzu, returns to America, decides Regan is in danger, returns with her to the now-abandoned Washington house where it all happened first time around, and is subjected to hallucinations in which Regan splits into Good-Regan and Evil-Regan. Evil-Regan tries to seduce him, but he finds the strength to tear out her heart. Locusts attack, the house collapses, but Regan and Lamont walk out unharmed.

Worried about the test audiences who laughed at the final scenes, Warner Brothers demanded Boorman re-edit the film. In the second version, the one that was shown in Australia, Father Lamont is killed at the end. Other major changes of emphasis were also made, and the second version did much better. I asked Mr. Boorman where he went wrong, and he told me, “The sin I committed was not giving the audience what it wanted in terms of horror. There’s this wild beast out there which is the audience. I created this arena and I simply didn’t throw enough Christians into it.”

The film has moments of incoherence and a melodramatic performance from Burton, but it also has a thought-provoking intellectual structure. Boorman had denied the Good-Evil dualism of the first film, and sees Good and Evil as co-existing in an uneasy balance, each one needing the other, it seems, to make it meaningful. As part of this, the Evil side of the equation is subtly seductive, not merely ugly as in the first film. Pazuzu is linked with images of great energy and sometimes beauty as well as hordes of all-devouring locusts. In short, Pazuzu is given dignity. The film is full of precarious tensions between different ways of thought: Science/Magic, Priest/Psychiatrist, Faith/Doubt, Nature/Supernatural, Healing/Destroying. Lamont, the good priest, has moments when he is infected by the very Evil he is trying to destroy.

The visual images of the film are very strong: The primitive African cliff-village, all muddy browns; The locust plagues (shot by Oxford Scientific Films); The demon’s flight on the wind; The extraordinary makeup effect when the possessed Regan (all warty and horrible) becomes voluptuous Regan in one smooth continuous take. This is a complex, teasing, hesitant, exploratory sort of film that breaks many of the genre’s rules. It has its absurd moments, yes, but one has to admire its metaphysical ambition and its refusal to settle for stereotypes. Keep that in mind for the next seven days, and join me again next week so I can poke you in the mind’s eye with another pointed stick from the faggot formerly known as Hollywoodland for…Horror News! Toodles!