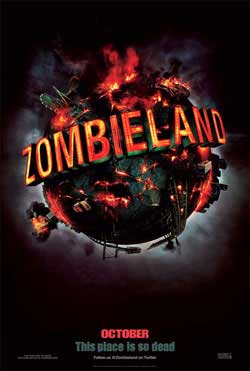 A shy student trying to reach his family in Ohio, and a gun-toting tough guy trying to find the Last Twinkie and a pair of sisters trying to get to an amusement park join forces to travel across a zombie-filled America.

#1 Rule = Cardio, #2 rule Double Tap. You might think that you’ve fallen right into a zombie instruction manual. An in some of the cases, that may be true. This apocalyptic state of the world has blossomed a outbreak of zombism with a few surviving members left to weed thru all the crap. Columbus, Ohio played by our Facebook toting Jesse Eisenberg provides comedy relief as the viciousness of the world around him consumes everything in sight. Zombies are running amok, that’s for sure. Columbus manages to stay alive by keeping to the basic rules of this new world condition. Where did the outbreak come from? Well we are told it started with some guy and grew out from there. In any case, its doesn’t matter. As a horror viewers we just accept that zombies have taken over with the name of the game being survival. 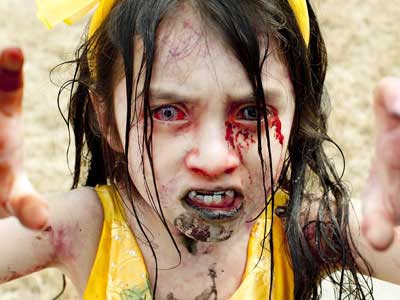 As Columbus runs his daily routine, a fight for survival is pretty much a common factor. he can stay at home and languish in video games or go out and see the world. Well an attractive neighbor next door swings by and contaminating his place, so Columbus heads out on the road. It’s not long before he meets Tallahassee (Woody Harrelson), a professional ass kicker and survivalist himself with a hunger for Twinkies. The 2 of them take on a hero / sidekick relationship full of energy and clever confrontation. In walks hottie and firecracker Emma Stone upping the game with a clever approach to her own survival techniques. Playing the role of Wichita, Emma stands as a standalone tough ass female who knows how to handle herself whether it be living or not. Her and younger sister have done ok up till now, mainly from cons and standing by the rule of not trusting anyone. That rule will start to bend as the group grows a fondness for each other in this bizarre and chaotic world. 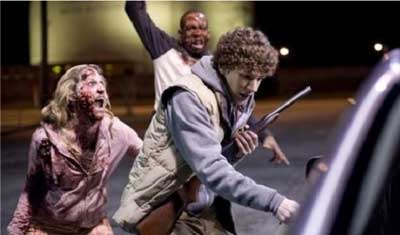 Columbus and Tallahassee make their way across the country. Tallahassee is bent on twinkies and the rest seem to think that sanctuary awaits in a L.A. based amusement park called “Pacific Playland” (Note: Wild Adventures Theme Park, in Valdosta, GA). The word is, there are no zombies there. Traveling cross country has its up and downs whether its Wichita and sis, constantly leaving them behind or a small crush that has a blink of a chance. 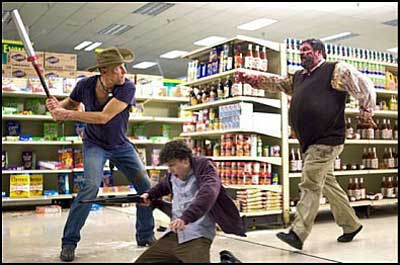 This unique hybrid stays close to the comedic side usually enhanced per way of Columbus’s voice overs on life itself. Harrelson never lets up on his knack for taking down zombies and the girls just seem to be playing it by ear. The journey finds its way to actor Bill Murray’s house for a quick cameo and small high point to the movie. An dif your wondering if the zombies ever stop…..its pretty much a go from front to back. Humor is found in dark moments such as the zombies falling victim to amusement park standards…and we even get to meet a scary clown zombie that shows up just in time for Columbus to face his own fears 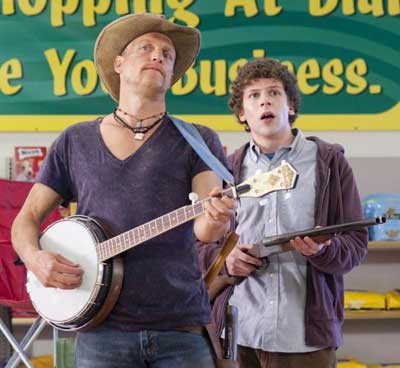 “Zombieland“, a theatrical release had all the right elements to make it a hit at the movie theatres. Good acting, dark comedy and of course plenty of viciousness in the form of the living dead. It’s dark violence is blanketed over with a air of survival nonsense and actor appeal. Namely, Woody Harrelson who brings a comfort level to taking down the walking creatures populating the land. As he puts it…nut up or shut up”. Jesse Eisenberg brings a nerdy innocence that seems to add the right amount of empowerment to the stereotypical underdog. It is this style of keeping to the right choices that kept him alive and fuels his decisions in dealing with a world full of savages. 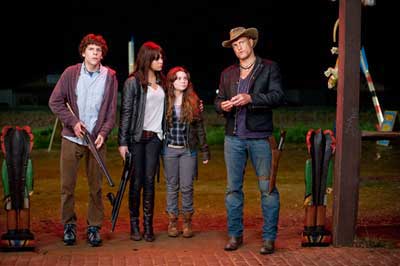 The directing debut comes way of Ruben Fleischer, previously known for more some of his TV work. The #3 used and painted on all the cars used by Harrelson were in reference to Dale Earnhardt.

Zombieland” is as much of an amusement ride as the park they end up in. A favorite among zombie fans and just simply a great film period.