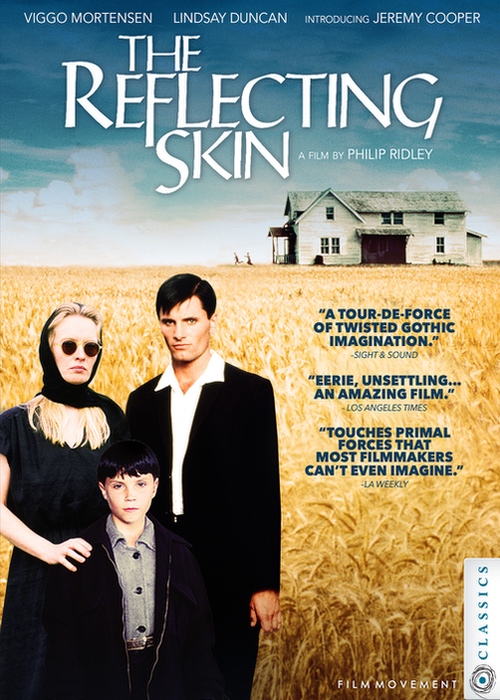 In the 1950’s, a young boy living with his troublesome family in rural USA fantasizes that a neighboring widow is actually a vampire, responsible for a number of disappearances in the area.

Being a little kid before the days of the Internet was a different world. You were kept in the dark about a lot simply because you never were exposed to much of life outside your family. You always had to ask about stuff you didn’t know or understand, and if someone didn’t feel you needed to know, then you were told to mind your own business. You misunderstood things because you didn’t have the emotional growth to understand the subtle messages people and life send your way. Feelings, new and powerful, confused the situation even more, and you occasionally felt either overwhelmed or just plain lost. 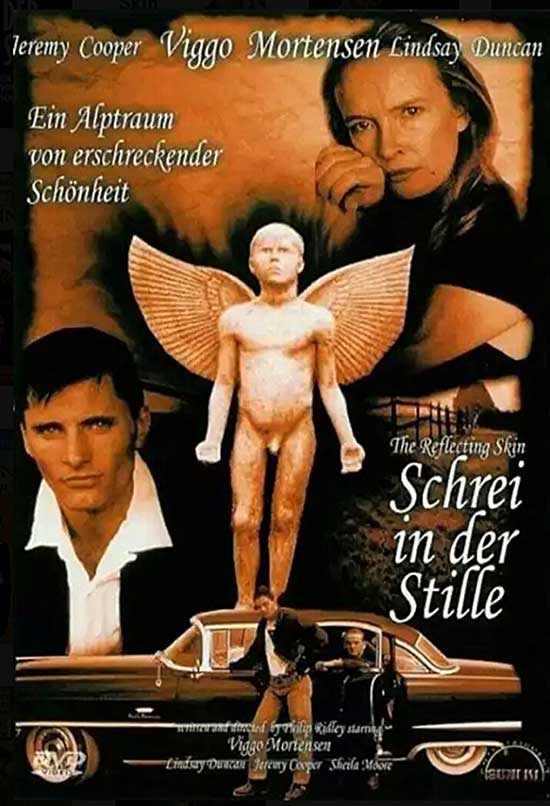 Maybe I was an overly sensitive child.

Trying to successfully capture that weird world kids used to inhabit is difficult. Ray Bradbury managed to do it in his writing, from The October Country and Something Wicked This Way Comes to Dandelion Wine. In fact, he is probably best at capturing those days as you were slowing learning and becoming an adult against your wishes and better judgement.

How to capture that kind of world when it comes to film is an even tougher issue. Making the images universal enough to convey a story from inside the mind of young child would possibly be a task that would test a director’s skill and vision. Terry Gilliam tried with “Tideland”, and he had to step in and attempt to explain the film. 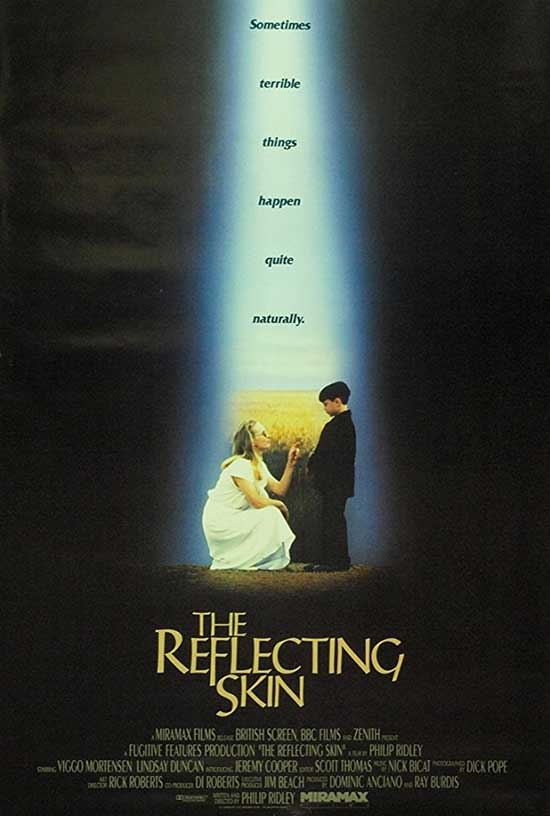 Philip Ridley, as both writer and director, made the same attempt with his film “The Reflecting Skin”. He came closer to succeeding than others, but, oh mercy, this is NOT a film for everyone. Not to say that if you don’t care for it or even understand it that you are defective. I mean, some people like crosswords while others like Sudoku. This flick would be more Sudoku, if that tells you anything.

The main character of “The Reflecting Skin” is Seth Dove, a 9-year-old boy whose world is on the verge of complete change. In a land that looks like Andrew Wyeth’s painting Christina’s World, Seth is trying to find his place in a world he knows precious little about. He runs through the miles and miles of wheat fields that surround the community where he lives. He plays with his two friends, Eben and Kim. He admires his father, who runs a ramshackle gas station, and fears his mother, who alternates between just wanting some comfort to being an abusive shrew. 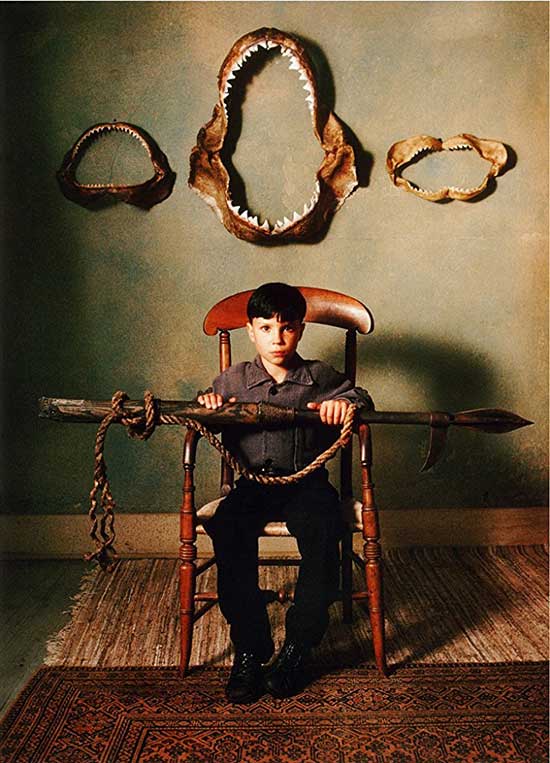 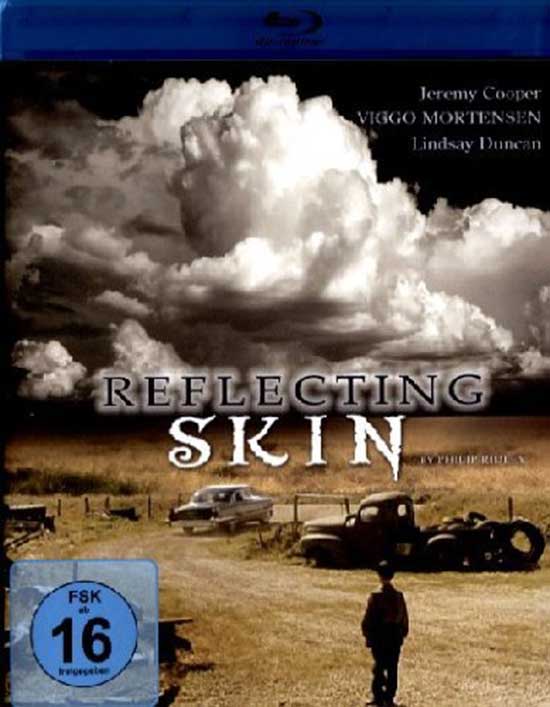 Seth is obsessed with an English widow named Dolphin Blue. His wild emotions lead him to torment the woman as the only way he knows to express the confused urges he feels. He eventually, thanks to a pulp magazine his father reads, convinces himself that Dolphin is a vampire as a way of explaining how he feels when he sees her. He believes she is attempting to beguile him with her powers, and he steels himself to resist her temptations.

Sadly, Seth does not live in a happy world. Everything, from buildings to people, seems distant and on the verge of collapse. His friends are younger than him. His mother pays him little mind. His father retreats into fantasy. His brother is off fighting the Japanese during World War II. The lonely widow, Dolphin, is still consumed by the grief and loss after her husband committed suicide. And poor Seth doesn’t know what is happening to him. Worse yet, he can’t seem to get help with his problems mainly because he has no understanding to allow him to ask the right questions.

When his brother returns after their father kills himself, Seth thinks he has found a stable person to cling to. Unfortunately, the brother, who has seen the after-effects on human beings from the atomic weapons that he has been testing in the Pacific, has become disillusioned with life, his sense of purpose, and his government. In fact, his brother pretty much rejects Seth in favor of the widow. 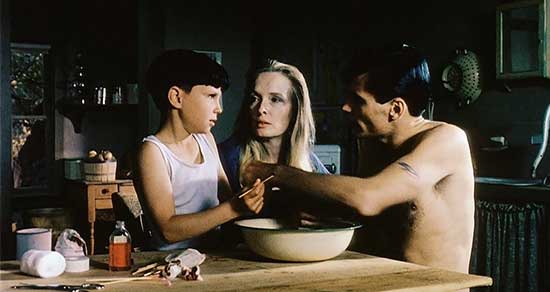 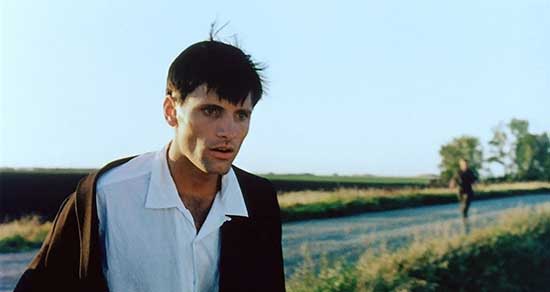 During this time, Seth has been seeing a carful of leather-jacketed young men. After pumping some gas for them and being caressed by the driver of the vehicle, Seth begins to see the vehicle appear each time another part of the boy’s world dies and fades away. This includes the sudden murders of his friends as well as failures to prevent his older brother’s relationship with Dolphin, whom Seth believes is slowly draining the young man’s life. He doesn’t realize that his brother is suffering from radioactive poisoning.

Events keep spiraling out of control until all the characters have to face an event that forever changes their lives.

“The Reflecting Skin” is not a horror film. It does contain elements of horror films, and it is, at times, utterly horrifying. Just keep in mind that you won’t find any stalk-and-kill scenes, jump scares, or gallons of blood and gore. But that’s okay because humans at their most desperate are more frightening than anything fanciful that can be imagined.

The thing about this movie that I think a good number of people find off-putting is that is rather specific in how it mounts and delivers its tale. It is not a film full of action. It is very carefully paced so that you can clearly see the changes Seth goes through and have some understanding of why those changes take place. And, as a viewer, you will need to be able to crawl into the mind of a boy who knows little of the adult world and has to develop his own explanations for all the events, physical/mental/emotional, he faces.

It may be asking a lot, but you may find yourself in awe of the insane layers of interpretation that can be brought to this film if you can make that connection with the main character. I don’t want to offer up more of my own thoughts on the film than I already have because it is a film that each individual can find something for themselves within it, yet still be able to discuss the hidden meanings and subtle messages Philip Ridley stirred into this visually stunning film. I don’t want to flavor your viewing of the film with what I saw.

Experience “The Reflecting Skin” for yourself. Just do not pick up the film expecting a traditional horror film, and you may find yourself running through the endless wheat fields alongside Seth.