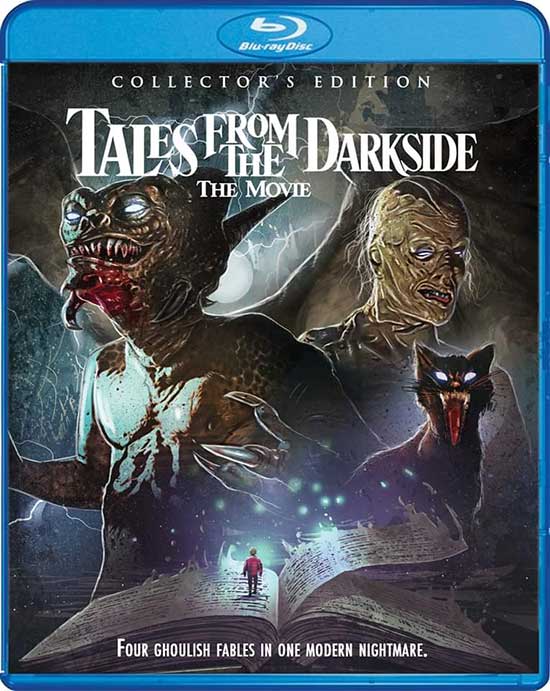 A young boy tells three stories of horror to distract a witch who plans to eat him.

The anthology horror movie; a sub-genre that’s seen more than its fair share of weird, wonderful and – let’s face it – pretty wonky efforts over the years. These go back much further than one might expect, with some very early German efforts dating back to pre-1920s – then becoming much more popular in the 1960s and 70s, with various British entries in the catalogue such as Tales That Witness Madness and Dr Terror’s House Of Horrors. Hollywood firmly grabbed the reins in the 1980s, with such seminal horror anthologies as Creepshow (1 and 2), Cat’s Eye and Twilight Zone: The Movie. The format seemed to go off the boil for a while after this, before something of a recent resurgence with movies like Trick ‘r Treat, The ABCs Of Death and VHS, the latter franchises both running to sequels as well. 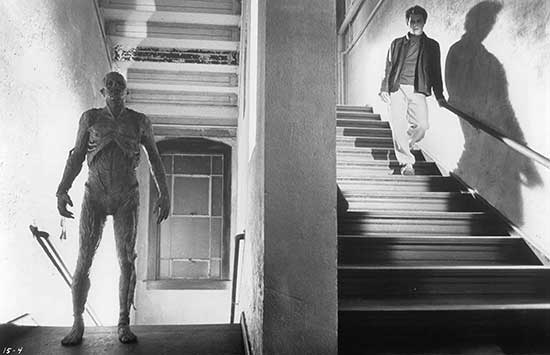 It’s probably fair to say that anthology movies of this sort don’t often fall into the category of pure horror; rather their short vignette format (often presented with a framing back story that loosely connects the sequences together) lends itself well to more light-hearted fare, with a few sly chuckles mixed in with the gleeful gore. Which brings us to a somewhat unfairly overlooked entry into this quirkiest of genres; 1990’s Tales From The Darkside: The Movie. Due very soon for a special edition Blu-Ray release from Scream Factory (with loads of bonus features including new audio commentaries and documentary footage), this little gem has been a fan favourite for a long time while rarely being mentioned in the same breath as the more widely known Creepshow movies. This is a shame, as it’s a movie that deserves to be seen by all true horror fans. 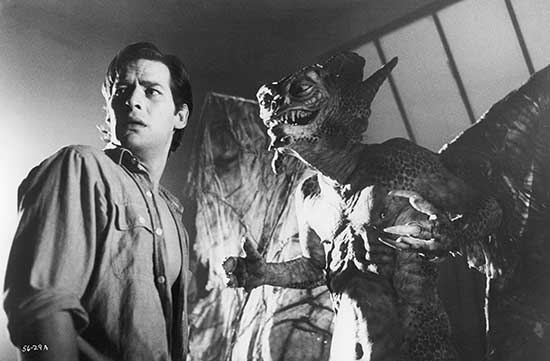 Much like the aforementioned Creepshow, there are some seminal genre names attached to Tales From The Darkside, including writing duties by Michael McDowell (Beetlejuice, Thinner) and Stephen King (at this point it would probably be quicker to list all the books and films he hasn’t had something to do with); and of course by George A. Romero, whose name should need no introduction. Romero also created the TV show of the same name that Tales From The Darkside is based on. One thing that’s fairly unique to this anthology is that all three main story segments – and the framing story – are directed here by one man, John Harrison. Special effects are by KNB Efx, including work by Tom Savini’s one-time apprentice Greg Nicotero. 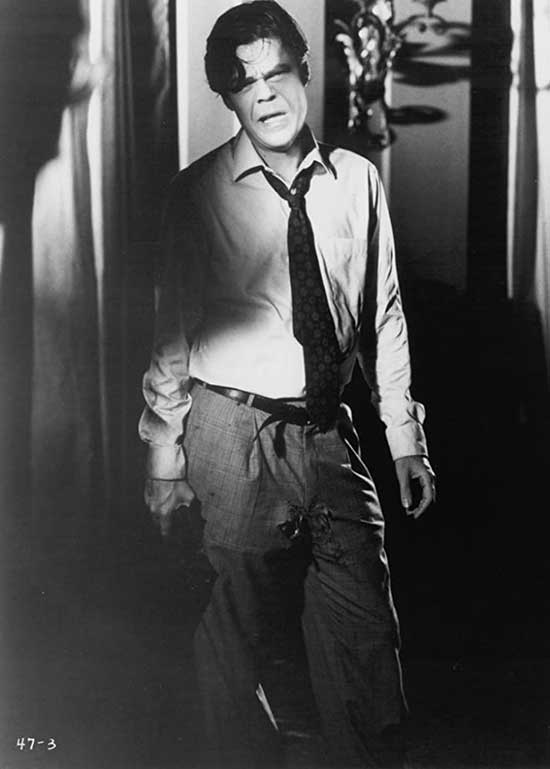 The movie opens with a woman having a pleasant day out in town shopping for groceries; the first thing that you may notice is that said woman is played by none other than Debbie Harry, Blondie herself! While Deb has had a surprising amount of screen experience, most famously to horror fans as Nicki Brand in David Cronenberg’s astonishing Videodrome (although others may know of her somewhat exaggerated claims to have once been almost abducted by Ted Bundy), it’s fair to say that – while she looks as great on screen as on stage – she is perhaps not the most naturally gifted actress to ever grace a strip of celluloid. Nevertheless, she plays her role – that of suburban witch Betty who just happens to have a kidnapped paperboy chained up in her kitchen pantry – with gusto. Said paperboy, Timmy, is understandably keen to avoid Betty’s plan for him (that of being casseroled on a slow heat until he’s tender to the point of his flesh falling off the bone); so when an opportunity presents itself to distract Betty with one of her favourite pleasures, being read a good horror story, he jumps at the chance.

This cute framing device naturally gives us the jumping off point for our three tales of terror; the first, ‘Lot 249’, being loosely based on – of all things – a short story by Sir Arthur Conan Doyle (yep, he of Sherlock Holmes fame). We meet college student pals Lee (Robert Sedgwick) and Andy (Christian Slater), the former of which has cheated fellow student Edward (Steve Buscemi) out of his fellowship by nefarious means with the aid of his sister Susan (Julianne Moore). Anyone noticing there are some seriously big names in this movie just in the first story?? 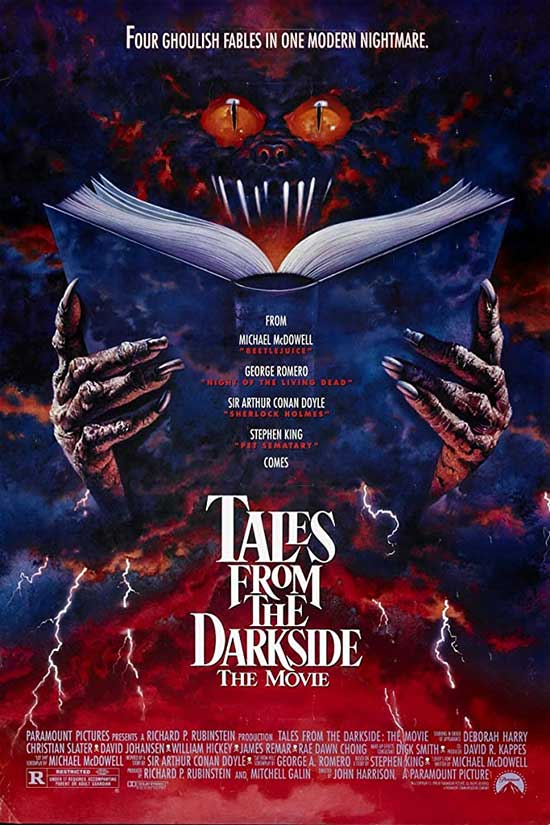 Edward’s revenge is diabolical, and involves the assistance of his rather dusty new friend, a three thousand year old mummy he has acquired (no doubt on the 1990s Craigslist equivalent). Edward can command the mummy to do his bidding by reading aloud from an ancient scroll (in English for some strange reason, but we’ll leave that for another day) – so of course he sends him on a killing spree. This is a great little story as an opener, with plenty of black humour and the abundant charm of both Christian Slater and Steve Buscemi, not to mention being atmospherically shot and with some decent gory kills to boot.

The second story, ‘Cat From Hell’, is a George A. Romero adaptation of a Stephen King story – so two heavyweights right there off the bat. We meet eccentric, wheelchair-bound millionaire Drogan (William Hickey), who has employed the expensive services of laconic hitman Halston (played by none other than David Johansen – who you may recognise as not only the Ghost of Christmas Past from Scrooged, but also as the singer from the New York Dolls – what is it with rock legends and this movie??). This hit is a little unusual though, in that Drogan wishes to rid himself of an innocuous-looking black cat. It transpires that Drogan has made his millions from big pharmaceuticals, and his big discovery – a wonder drug called tridormal-G – was tested on thousands of poor innocent kitty-cats; the black one that stalks his gloomy mansion is in fact a spectral entity out for vengeance on their behalf!

This is another brilliant story, notable for not just some great character acting (Hickey and Johansen are always great, and the eagle-eyed may spot Mark Margolis – he of Breaking Bad and Better Call Saul fame – as butler Gage) but also some wonderfully atmospheric visuals. There are some sublime flashbacks, shot in a starkly cold blue filter, which segue seamlessly into the present day with some amazingly lit Sergio Leone-style extreme facial close-ups. It’s brilliant stuff, really piling on the atmosphere; and there’s some incredible practical gore too, not to mention an amusingly grotesque death thrown in. 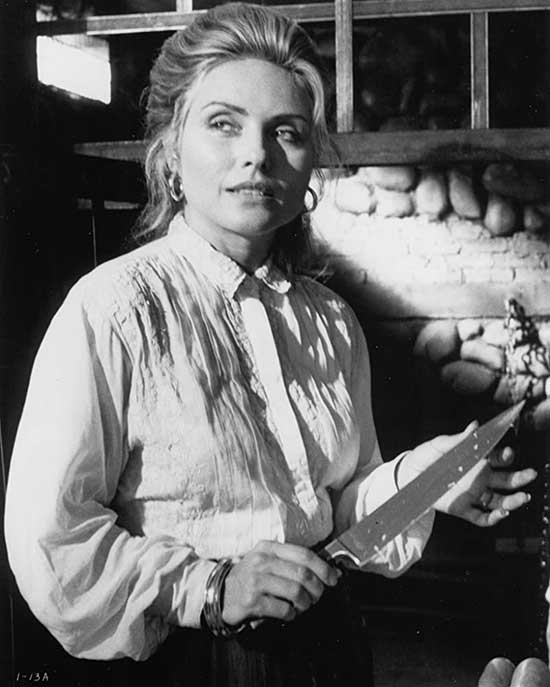 Last, but definitely not least, is ‘Lover’s Vow’. This gem is set in seedy 90s-era New York City, where we meet struggling artist Preston in a run-down bar as his agent Wyatt gives him the boot. After drowning his sorrows, Preston and the bar owner leave for the night; Preston is fortunate enough to be taking a drunken leak up the sleazy alley wall while his pal meets his demise at the hands of a grotesque winged demon. After witnessing the bar owner being literally torn to pieces (more great effects work by KNB), he prepares himself for his own impending death but is stunned to be instead offered a verbal agreement from the creature – to allow him to live if he promises to never speak of their encounter to another living soul. Of course he agrees….

While fleeing in terror afterwards he meets naive out-of-towner Carola (Rae Dawn Chong of Arnie’s Commando); still fearing for his life he persuades her the streets aren’t safe and to call for a taxi from his apartment. It’s not long before they’re doing the nasty – and before long they are full-time lovers. Carola happens to know contacts at some of the big art galleries, and very soon Preston’s troubles seem to be over as he hits it big in the art world. But is there more to Carola than meets the eye? This, again, is a brilliantly written and presented story, with some terrific practical gore and effects work, not least for the winged demon itself. The twist isn’t too difficult to spot coming but it’s still a wonderfully memorable segment.

Tales From The Darkside is something of a rarity among horror anthology movies; there are only three main stories, and unusually there isn’t a weak link among them, a problem that often lets these movies down a little. The movie’s production values are good, with some great visuals and effects; it doesn’t take itself too seriously, with a nice line in sly black humour and the cast are outstanding. Here’s hoping this re-release will win it the new fans it deserves.