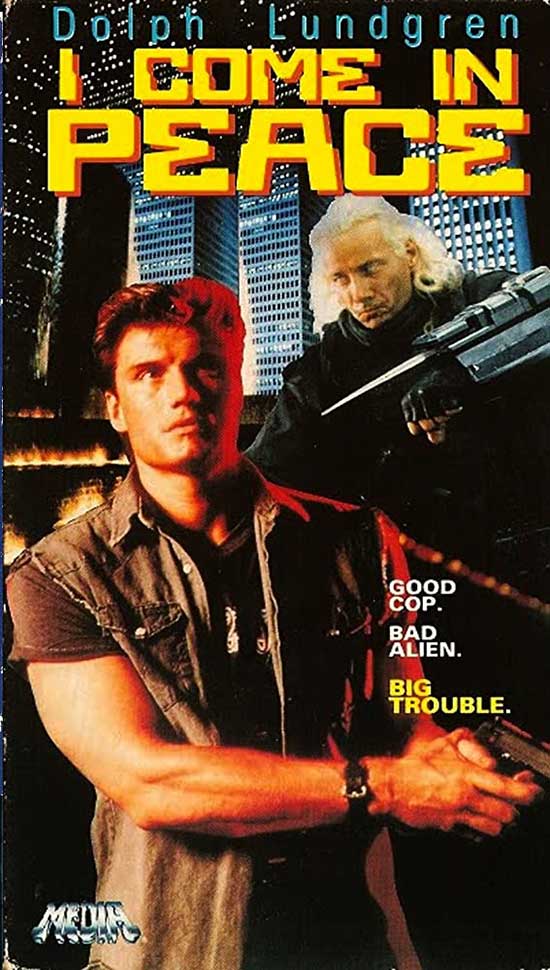 An alien (Matthias Hues) travels to earth on a mission to harvest human endorphins to sell on the intergalactic narcotics market. Meanwhile, undercover cop Jack Caine (Dolph Lundgren) is determined to avenge the death of his partner at the hands of a gang of upscale drug dealers known as The White Boys. Once the rogue cop and the lethal alien cross paths there’s hell to pay, cars to wreck and shopping malls to demolish.

I Come in Peace wedges every eighties action movie trope into one ninety-minute package. You’ve got a bad ass cop partnered with a by the book FBI agent, the cop’s plucky girlfriend who’s willing to forgive anything, an alien monster who (double word score!) is also a drug kingpin and it’s jam packed with car chases, gunfights and explosions all set to a Jan Hammer (Miami Vice) score. You could almost call it The Predator’s Lethal Terminating Weapon. But despite the clichés the filmmakers still sprinkle in a few novel touches— that shouldn’t come as a shock, as co-writer David Koepp went on to write Jurassic Park (1993) and Spider Man (2002).

While the action scenes are top notch, much of the movie’s charm stems from the subtle, but eccentric touches. The Brooks Brothers wearing drug gang known as the White Boys are an original concept, as is the idea of an interstellar drug dealer. That alien’s guided flying disc weapon is a genuine scene stealer. 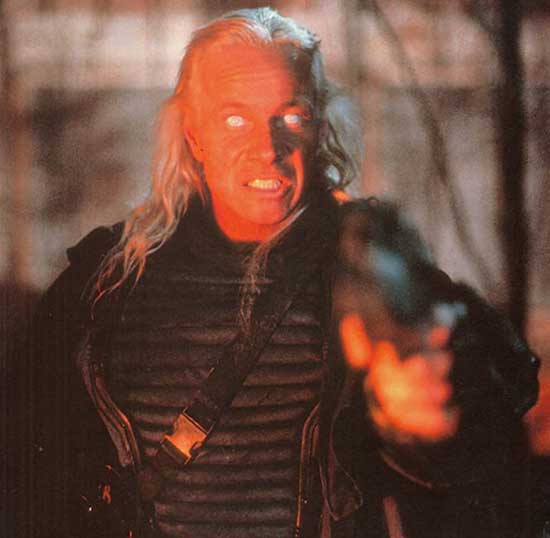 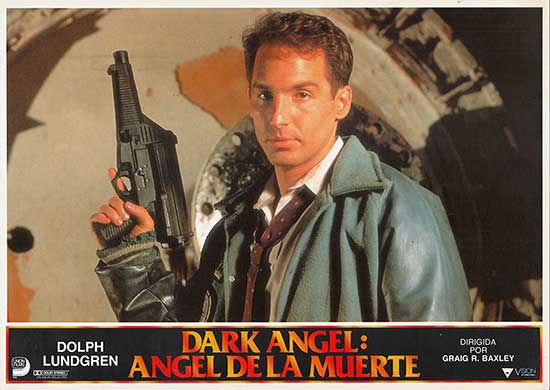 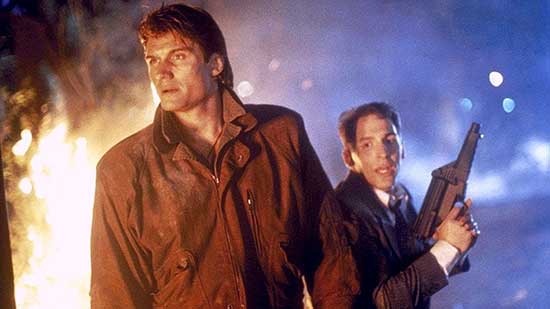 I Come in Peace was directed by a renown stunt coordinator and second unit director Craig R. Baxley (The Warriors). For a modestly budgeted film we get more car wrecks, explosions, gun fights and high falls than most blockbusters. This is all pre-CGI era, so those close proximity explosions and air mortared car flips were just as dangerous as they look on screen. Director of Photography Mark Irwin (Scream) covers the alien inflicted carnage perfectly. The Houston locations offer a breath of fresh air, and it’s obvious the Bayou City was willing to let the filmmakers crash and burn the local scenery to their hearts content. Baxley followed I Come in Peace with the 1991 Brian “Boz” Bosworth actioner Stone Cold—a flick that delivers all the mayhem and mullets you could ever want AND features Lance Henriksen as a sadistic biker. I smell a double feature here.

Baxley was savvy enough to enlist a solid supporting cast, allowing him to focus on the action, which he delivers in spades. Brian Benben (HBO’s Dream On) does a bang-up job as a strait-laced FBI agent saddled with Lundgren’s rouge cop. Betsy Brantley (Deep Impact) gives some zing to the usually thankless role of “rogue cop’s girlfriend.” We even get nice bits from cult favorites Michael J. Pollard (Bonnie and Clyde) and Jesse Vint (Macon County Line). Mark Lowenthal devours the scenery as a caffeine crazed scientist. Even Kevin Howard’s blink and you’ll miss him security guard is memorable. Let’s not overlook the towering Matthias Hues (Star Trek IV, The Undiscovered Country) as the drug dealing, throat slashing alien. He never says much, other than repeating the title over and over, but he has genuine presence. But the real cherry on this cinematic sundae is our star—that martial arts fighting, MIT graduating, superhuman hunk ‘o man-meat Mr. Dolph Lundgren. 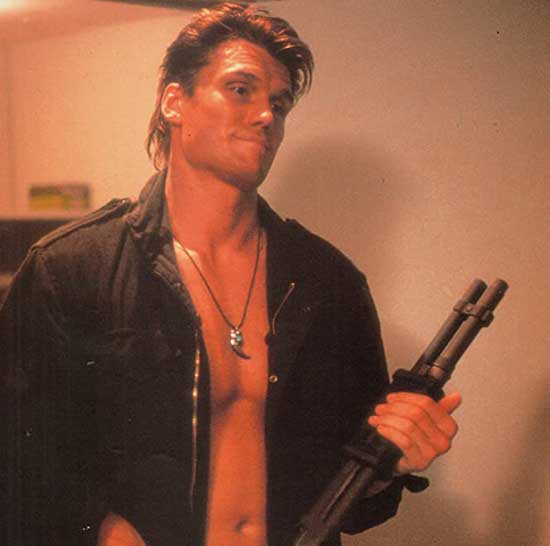 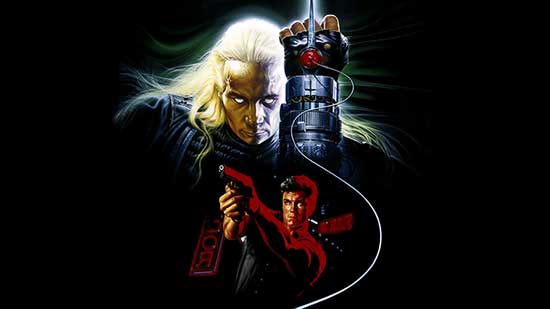 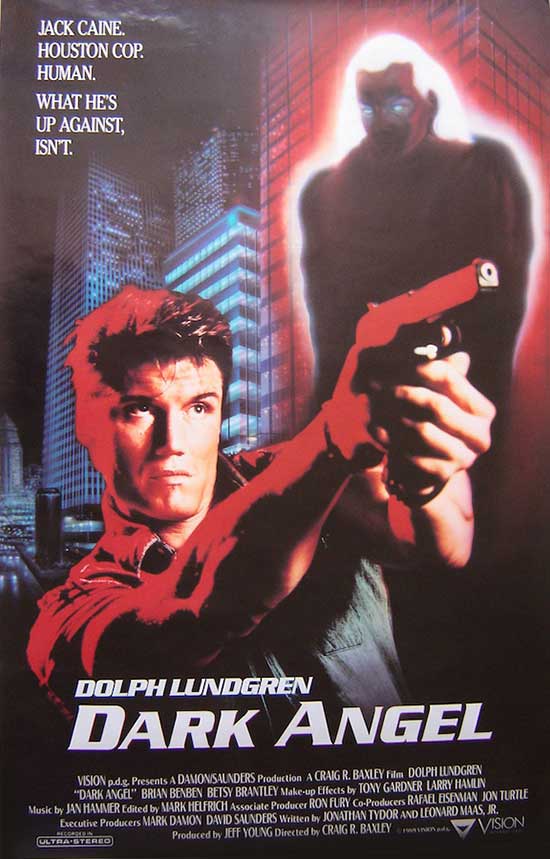 And now for the big question—is that masterpiece of mind and body Dolph Lundgren any good? To be honest, he comes off a little flat— probably because he focused too much energy on speaking English phonetically to hide his accent. But Lundgren possesses enough natural charm to hold his own with seasoned actors like Benben, and, as usual, his action scenes are terrific. I’ve always admired Lundgren’s willingness to get the crap beaten out of him on screen— something the stars of the Fast and Furious series have contractually declared off limits… that’s not a joke. Lundgren’s brutal beatdowns always make his final victory feel more triumphant. Lundgren could have been a much bigger star, but, at that time, Hollywood already had two accented action heroes in Schwarzenegger and Van Damme, making him one scoop of European testosterone too many. I worked with Lundgren briefly on Stormcatcher (1999), and am happy to report he’s as hard working, genuine and cool as you secretly hoped he was. 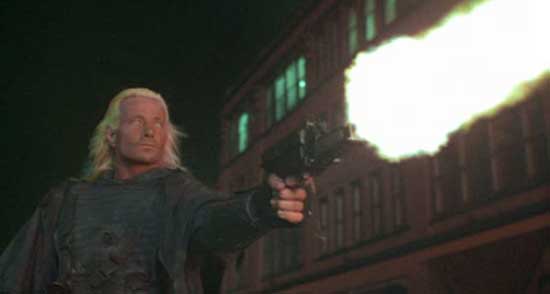 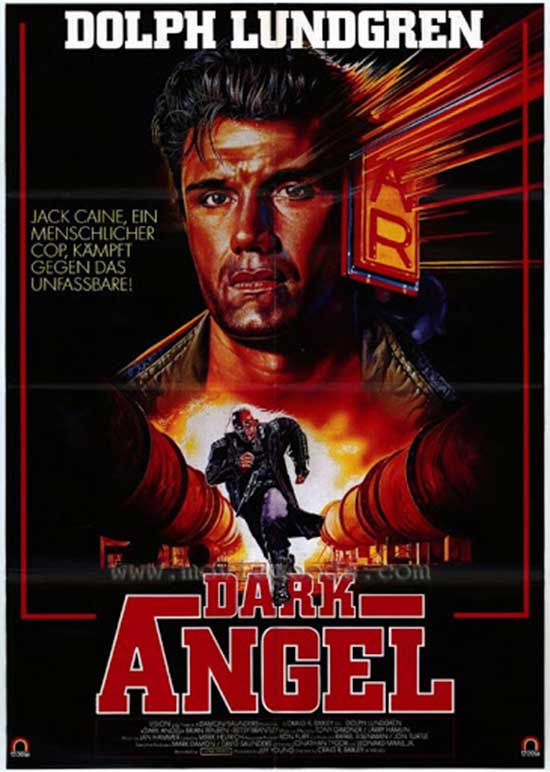 The only problem with I Come in Peace is that it came out in 1990, a year saturated with disappointing sequels to great action movies like Robocop 2, Die Hard 2 and Predator 2. It also hit theaters right after that mega hit science fiction shoot-em-up Total Recall, Sadly, I Come in Peace failed to score at the box office and has been woefully overlooked ever since. That’s a real shame because this movie’s raison d’etre is to shower you in B movie delirium. 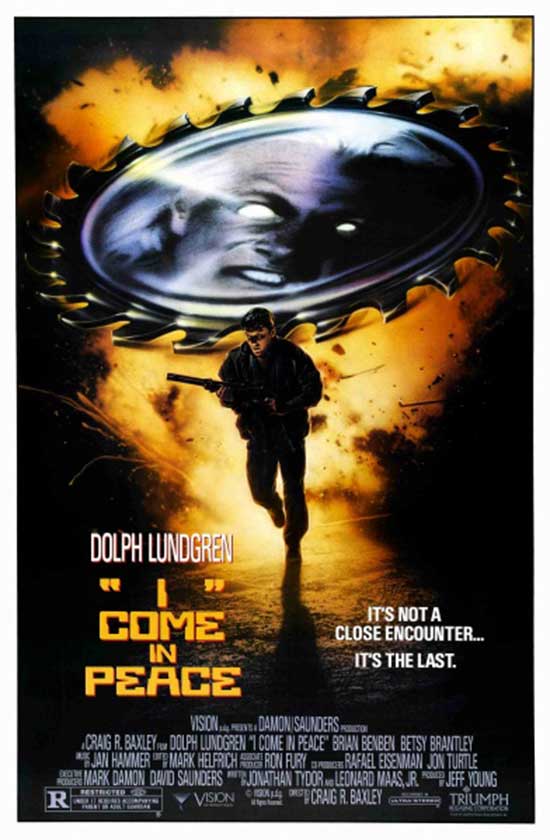 The final verdict? This one gets a solid B+. Sure, Lundgren lacks the sheer charisma of Arnold, and the mismatched cops don’t quite have the chemistry of Lethal Weapon’s duo. Granted, the stunts and explosions aren’t quite on Lethal Weapon’s overkill scale. But all these elements come just close enough to the A-list versions to keep you smiling till the end credits roll.