SYNOPSIS:
“In a small anywhere town in any state in America, two young boys – quiet Will Halloway and somewhat rebellious Jim Nightshade – enjoy the ever-shortening days of autumn. When the boys hear about a strange traveling carnival from a lightning rod salesman, they decide to see what it is all about – but Will is fearful, as most carnivals end their tours after Labor Day. When the ominous Mister Dark, the Illustrated Man, rides into town on a dark midnight, setting up his massive carnival in a matter of seconds, the boys are both thrilled and terrified. It seems to be just another carnival at first, but it is not before long that the forces of darkness themselves are manifesting from the haunting melodies of the carousel – which can change your age depending on which way you ride it-and the glaring Mirror Maze. With his collection of freaks and oddities, such as the Fat Man, Mister Electro and the blind Dust Witch, Dark intends to take control of the town and seize more innocent souls to damn. It will take all the wit and hope of the two boys to save their families and friends, with aid from an unlikely ally – Will’s father, the town librarian, who understands more than anyone else that something wicked this way comes.” (courtesy IMDB)

REVIEW:
Long before becoming one of fantasy’s best-selling authors of all-time, the twelve-year-old Ray Bradbury had an encounter with a carnival magician named Mister Electrico who told the boy he was the reincarnation of a friend lost during World War One, and that he would live forever. After that memorable day, Bradbury began writing and never stopped. In 1955 Hollywood superstar Gene Kelly asked Bradbury to write a script for Kelly to direct and star in, and suggested his 1948 short story The Black Ferris. When Kelly was unable to obtain financial backing for the movie, Bradbury expanded the script into a full-length novel, converting the benign presence of Mister Electrico into something more sinister and incorporating other familiar carnival attractions, including an Illustrated Man and a Skeleton Man.

Published in 1962, Something Wicked This Way Comes is about two fourteen-year-old boys, Jim Nightshade and William Halloway, who have a harrowing experience with a nightmarish traveling carnival that comes to their Midwestern town one October. The carnival’s leader is the mysterious Mister Dark who bears a tattoo for every person who has become bound in his service, lured by the offer to live out their fantasies. Dark’s malevolent presence is countered by that of Will’s father, Charles Halloway, who has his own secret desire to regain his youth because he feels as though he is too old for Will. The novel combines elements of fantasy and horror, analysing the conflicting natures of good and evil and how they come into play between the characters and the carnival. By 1977 Bradbury had sold the film rights to Paramount Pictures as a project to be directed by Jack Clayton, and had written a complete script ready to go before the cameras. However, production never began and the film was eventually shelved. 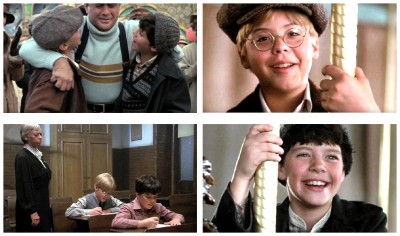 Come the eighties, Walt Disney Pictures was beginning to concentrate on films with more mature themes in an attempt to break free from their stereotype as a family-friendly studio. After the success of family-oriented fantasy films from rival studios, like Time Bandits (1981), E.T. The Extra-Terrestrial (1982) and The Dark Crystal (1982), Disney decided to purchase the rights to Something Wicked This Way Comes and hired Bradbury to write a brand new script from scratch. Bradbury agreed, provided that Clayton be brought on board as director. During the fifties, Clayton co-produced several interesting films like Beat The Devil (1953) and Moby Dick (1956), before becoming a director with films like Room At The Top (1959) and The Great Gatsby (1974). He’s best remembered for The Innocents (1961), although much of that film’s success arguably lies in its atmospheric camerawork by David Lynch‘s favourite cinematographer Freddie Francis. 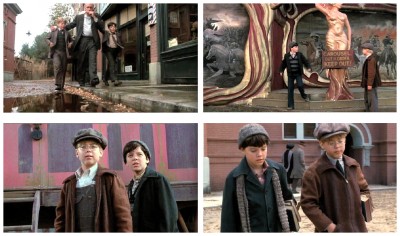 Bradbury also insisted that Mister Dark be portrayed by either Peter O’Toole or Christopher Lee, but Disney decided to go with the relatively unknown Jonathan Pryce instead due to budget restraints. Unfortunately, as production progressed, two different visions emerged: Bradbury wanted to stick to his novel, Clayton wanted a more accessible family-friendly film, and the partnership came to an end when Clayton hired John Mortimer to re-write Bradbury’s script, and Georges Delerue to compose the music score. Preview audiences were negative in the extreme with Clayton heavily criticised, so the Disney machine got busy, spending an additional US$5 million on re-shooting, re-editing and re-scoring the film. New special effects sequences were shot, a new soundtrack by James Horner replaced Delerue’s original, and Bradbury was brought back on board to rewrite the opening and closing. The end result is, as Bradbury himself once admitted, “Not a great film, no, but a decently nice one.”

Actually, the film is quite good. The visiting circus is a neat symbol of the entrance of fantasy into the routine lives of ordinary people – like Seven Faces Of Doctor Lao (1964) and Vampire Circus (1972) – and the people in Something Wicked This Way Comes (1983) could hardly be more ordinary. It’s set in Green Town, Illinois at the beginning of the last century, an idyllic village where everyone knows each other and everyone seems content with their lots in life. But, in reality, everyone has deep regrets that happiness in some form – youth, beauty, health, desire – has escaped them. The town librarian (Jason Robards) for instance, believes he hasn’t the youth or vitality to raise his young son Will (Vidal Peterson) properly. He also regrets that he missed the one opportunity to be brave for Will – it was up to a stranger to save Will from drowning – because his own father neglected to teach him how to swim.

The despair in the town attracts a weird traveling carnival that feeds on misery. The strange Satanic owner Mister Dark (Jonathan Pryce) grants the townspeople their secret desires, but at terrible prices, including their becoming part of his nomadic sideshow. A spinster schoolmarm (Mary Grace Canfield) becomes young and beautiful, a maimed shopkeeper (James Stacy) becomes an athlete, etc. But Will and his inseparable best friend Jim (Shawn Carson) see through the attractive facade of the carnival to the evil beneath. Symbolically they are fair and dark-haired, wholly innocent in one case, the other trembling on the brink of puberty, and therefore more vulnerable to the adult-oriented seductions on display. Narrated by Will as an adult (voiced by Arthur Hill) looking back, the film captures the young boy’s sense of wonder, the depth of his fears and, most importantly, his need for a rewarding relationship with his father. 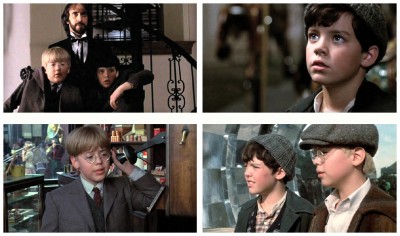 Admittedly, the film doesn’t really succeed as horror. For one thing, some of the images might be too gruesome for the type of viewers who’d appreciate the other elements of the film. But, like most of Bradbury’s work, it conveys nostalgia for a bygone era, with its small towns, its people, its innocence and, most importantly, it’s a sweet story in which a father and son finally discover each other. Jack Clayton, a past master at creating atmosphere, adopts a low-key approach to his gradual revelations, but he was often overruled, and there are some rather conventional horror-film set-pieces as well, like when the boys are menaced in their bedroom by hundreds of magical tarantulas (a scene that Clayton despised). It’s a good story, certainly the best big-screen adaptation of a Bradbury story to date, which is given a sad resonance by its subplot about children who don’t feel close to their parents (to a father in one case, the other to a mother). But it’s the father who finally saves the day, trapping Mister Dark on his own magic time-traveling carousel until he ages and decays into a mummified corpse. 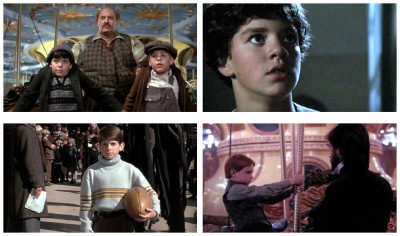 Ray Bradbury, author of twenty-seven novels and six hundred short stories published worldwide in thirty-six different languages, sadly passed away on Tuesday the 5th June 2012 after a lengthy illness. The following day US President Barack Obama stated that, “For many Americans, the news of Ray Bradbury’s death immediately brought to mind images from his work, imprinted in our minds, often from a young age. His gift for storytelling reshaped our culture and expanded our world. But Ray also understood that our imaginations could be used as a tool for better understanding, a vehicle for change, and an expression of our most cherished values. There is no doubt that Ray will continue to inspire many more generations with his writing, and our thoughts and prayers are with his family and friends.” 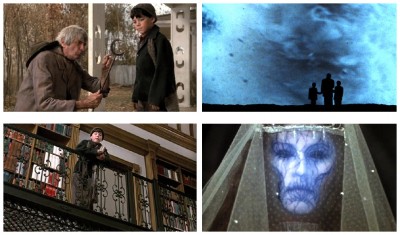 I’ll let Ray himself have the final word, concerning one of Green Town’s fascinations for the two dream-children of whom he has written: “As for my gravestone? I would like to borrow that great barber-pole from out front of the town shoppe, and have it run at midnight if you happened to drop by my mound to say hello. And there the old barber-pole would be, lit, its bright ribbons twining up out of mystery, turning, and twining away up into further mysteries, forever. And if you come to visit, leave an apple for the ghosts.” I’ll now make my farewells, but not before thanking Stephen King for his vital assistance in my research, in particular his fascinating non-fiction book Danse Macabre (published 1981). It’s terribly important that you join me for next week’s edition of Horror News, because an old carny told me that if you don’t read all my reviews from now on, the entire world will come to a nasty end. Normally I’m highly skeptical of such claims, but he was just so certain, I feel we’d best not take the risk. So enjoy your week, and remember, the survival of the entire world depends on you. Toodles!

Something Wicked This Way Comes (1983)