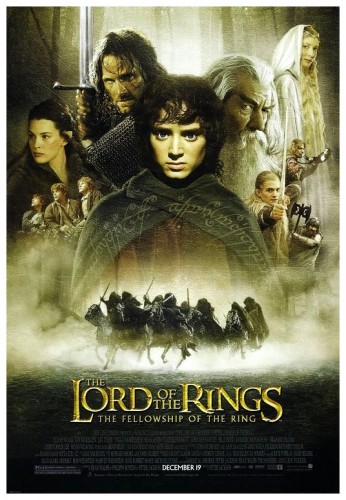 “An ancient Ring thought lost for centuries has been found, and through a strange twist in fate has been given to a small Hobbit named Frodo. When Gandalf discovers the Ring is in fact the One Ring of the Dark Lord Sauron, Frodo must make an epic quest to the Cracks of Doom in order to destroy it! However he does not go alone. He is joined by Gandalf, Legolas the elf, Gimli the Dwarf, Aragorn, Boromir and his three Hobbit friends Merry, Pippin and Samwise. Through mountains, snow, darkness, forests, rivers and plains, facing evil and danger at every corner the Fellowship of the Ring must go. Their quest to destroy the One Ring is the only hope for the end of the Dark Lords reign!” (courtesy IMDB)

“In a hole in the ground there lived a hobbit.” Those words popped inexplicably into the head of Oxford University professor J.R.R. Tolkien one day as he graded student papers. Years later he confessed that he did not know why he had thought of that mysterious sentence and then written on a blank sheet of paper, but from that seemingly insignificant scrawl, he would develop an ancient history and society, draw detailed maps and even craft languages for an imaginary world he called Middle-Earth. Tolkien’s children witnessed that world’s genesis during cozy evenings at home when their father, a natural storyteller, stood in front of a roaring fireplace and spun beguiling tales of little beings he called hobbits. Tolkien’s fireside stories were shared with the world in 1937 with the publication of The Hobbit, Or There And Back Again, an account of how hobbit Bilbo Baggins goes adventuring from his home in the pastoral Shire and returns with a mysterious ring of power. 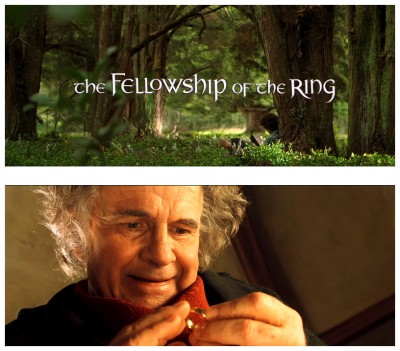 World War II was consuming Europe when Tolkien began writing The Lord Of The Rings – set sixty years after Bilbo’s adventures – the first volume of which saw publication in 1954. The Lord Of The Rings has since sold over a hundred million copies worldwide, spawning generations of fans. However, the complexities of Tolkien’s literary trilogy had long frustrated filmmakers, from Walt Disney to Stanley Kubrick to George Lucas, who had considered translating it to the cinema. Animator Ralph Bakshi produced and animated the rather disappointing Lord Of The Rings (1978), the first part of an intended two features, but it took the vision and nerve of New Zealander director Peter Jackson to finally realise it as a live-action epic. Jackson’s odyssey began as the director’s supernatural thriller The Frighteners (1996) approached the end of its postproduction at Weta Digital, a home-grown visual effects facility founded by Jackson, Richard Taylor and Jamie Selkirk. Once The Frighteners was completed, they had no more effects for Weta to do, and wondered what would come next. At first Jackson wanted to do a Harryhausen-style fantasy adventure with fantastic creatures and extraordinary worlds, and it was then he began looking into the rights for The Lord Of The Rings. 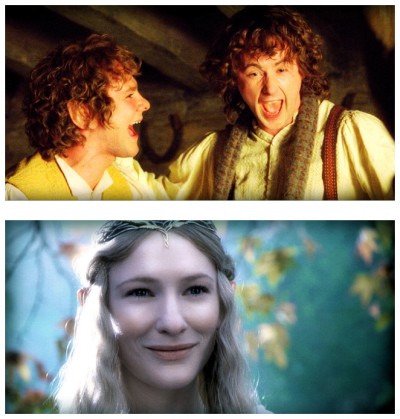 Jackson pursued those rights, held for years by producer Saul Zaentz, and a back-to-back two-film production was planned under the aegis of Miramax. During an eighteen month long preproduction, Jackson prepared two hefty shooting scripts while Weta’s developed everything from crowd simulation software and CG creatures to props and prosthetics. Concept art was being produced by the ream. But, suddenly, all of the film preparation – set and character design, script polishing, the ramp-up of Weta – was brought to a halt as Miramax balked at the cost and risk involved with committing to two films. As a compromise, the studio proposed narrowing the focus to just one film, wanting the entire story of The Lord Of The Rings in one feature – not a four-hour epic, but a single two-hour film. Miramax gave Jackson four weeks to take the project somewhere else. If, at the end of that period, he had not found a studio, Miramax would take back the rights, dis-involve Jackson and find someone else to make this two-hour film. 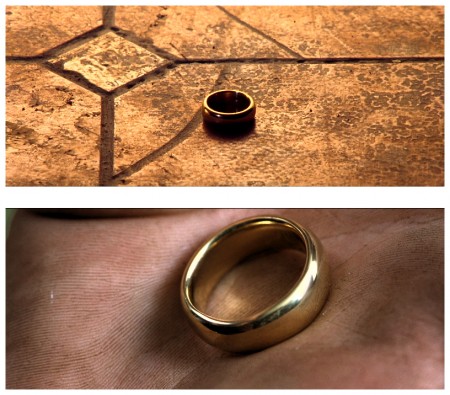 With just two weeks left, Jackson flew to Los Angeles with a twenty-five minute documentary, two scripts and a budget breakdown for the two productions. He had made the rounds of other studios with no avail by the time he met with New Line Cinema chairman and CEO Robert Shaye. Jackson recalls, “We screened the documentary for Bob Shaye, and it was the most excruciating experience. The whole time he just sat there, not reacting at all. At the end of it, Bob turned and said, ‘I don’t understand’. My heart dropped. Oh God, this is the end! Then he said, ‘I don’t understand why you’d want to make one or two movies when there are actually three books. Why wouldn’t you want to make three films?’ Well, if you’d like us to make three films, we’d be very honoured indeed to do that!” 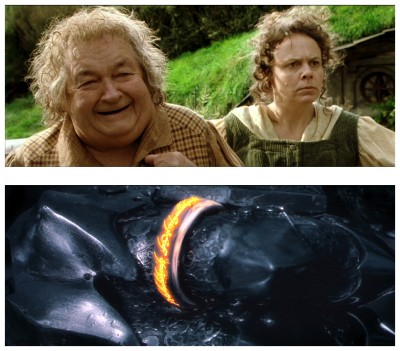 New Line Cinema agreed to back three films – The Fellowship Of The Ring, The Two Towers and The Return Of The King – each of which would be directed by Jackson and released in three subsequent Christmas seasons, the first scheduled for 2001. The audacious plan was to film all three movies simultaneously in a marathon fifteen month shooting schedule based in New Zealand, where the director had been building up a production infrastructure since his teenage days of shooting Super-8 films. That infrastructure consisted of a Wellington production hub complete with soundstages, as well as Weta Digital and the 68,000-square-foot facility that housed Weta Workshop. 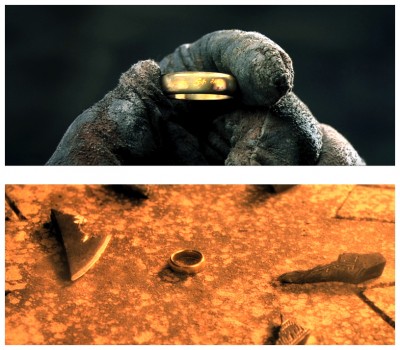 Logically, the most concerted effort in the first phase of production was aimed at the five hundred effects featured in The Fellowship Of The Ring. The inaugural film introduces hobbit Bilbo Baggins (Ian Holm), who decides to leave his home in Hobbiton and bequeath all his possessions – including the ring he found in the course of his wanderings six decades earlier – to his young cousin Frodo Baggins (Elijah Wood). The occasion is Bilbo’s ‘eleventy-first’ birthday, marked by the arrival of old friend and wizard Gandalf (Ian McKellen). Noting the ring’s disturbing hold on Bilbo, Gandalf leaves Hobbiton to seek answers, and returns with the terrible knowledge that the ring is the One Ring sought by the spirit of Sauron, ruler of the dark land of Mordor. The once-sleeping spirit has now awakened, garnering all the evil forces of Middle-Earth to claim the ring, whose mystical power is foretold in a hidden inscription: “One Ring To Rule Them All, One Ring To Find Them, One Ring To Bring Them All And In The Darkness Bind Them.” 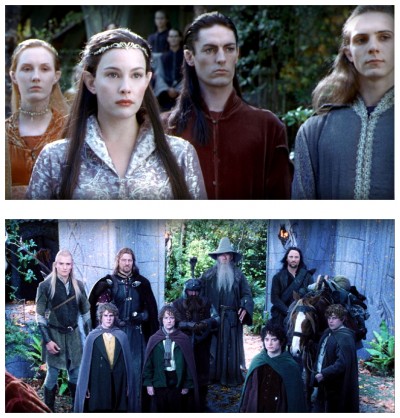 Frodo learns that the only hope for the good hobbits, men, elves and dwarves of Middle-Earth is to destroy the ring by journeying to Mordor and casting it into the volcanic fires of Mount Doom, where it was originally forged. Reluctantly, Frodo takes on the responsibility, ultimately joined in his quest by Gandalf, fellow hobbits Samwise Gamgee (Sean Astin), Pippin Took (Billy Boyd) and Merry Brandybuck (Dominic Monaghan), the elf Legolas (Orlando Bloom), the dwarf Gimli (John Rhys-Davies) and the men Aragorn (Viggo Mortensen) and Boromir (Sean Bean) – a nine-member fellowship that bravely begins the journey to Mordor, fighting Sauron’s evil forces at every turn. 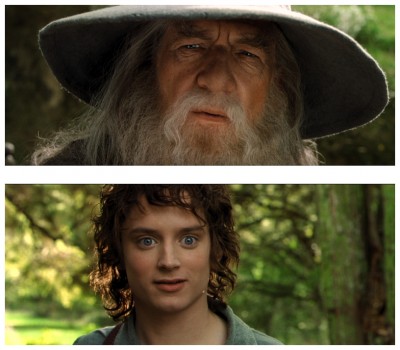 Jackson’s intention, stated from the outset, was to conjure a Middle-Earth that reflected Tolkien’s vision but was also firmly grounded in reality. To that end, the director encouraged his designers to think of The Lord Of The Rings as a historical account, rather than a fantasy. Jackson stated, “Ancient history is fantastical to a certain extent. If we were transported back to ancient Rome, we’d think of it as slightly fantastical because it is so different. That’s how we approached this. At the beginning of the project, I had everyone imagine that The Lord Of The Rings actually took place, as Tolkien had suggested, on our Earth some seven or eight thousand years ago, and that all these locations and cultures actually existed at one time. All that we as a film crew were doing was dressing actors in authentic costumes and taking our cameras out to where these historical events took place to recreate those events. It was critical to me that nothing look artificial or fake.” 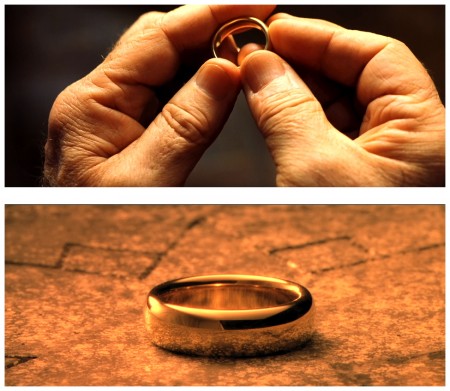 Film one ends, but the Ring cycle has only just begun. By the time the third film was released in 2003, Jackson and many of his team had invested more than eight years in The Lord Of The Rings. In the realm of high-tech visual effects, eight years is a very long time, long enough to see the development of multiple generations of technologies. By the time they were done with the trilogy, Weta had changed a couple of generations of equipment, and a lot of the tools and techniques had been totally redefined. They had to be, since The Two Towers was twice as complex as The Fellowship Of The Ring, and The Return Of The King was more complex than the first two films. 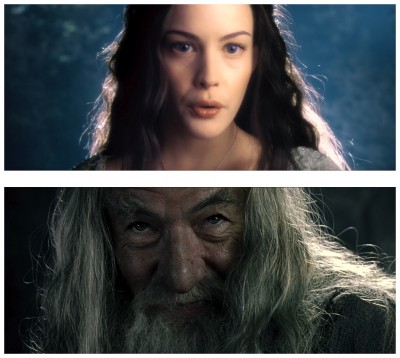 Having completed The Fellowship Of The Ring, but still heavily embroiled in day-to-day postproduction on The Two Towers and The Return Of The King, Jackson was just beginning to come to grips with the sheer scope of the project he had taken on. “It seemed like a good idea one day to say, ‘Let’s do The Lord Of The Rings and shoot all three movies back-to-back – wouldn’t that be great?’ and then you slowly start to work out the logistics, and you realise the size of the job. The enormity grows and the complexity grows as you go along, and it becomes a long strategic difficult jigsaw puzzle that has to be figured out. But the way I countered that was by thinking, ‘Is there anything else I’d prefer to be doing? Is there anything else in the world I’d rather be doing right now than making three Lord Of The Rings movies back-to-back?’ and there wasn’t. In a way, the project’s enormity and complexity and the endurance it required were what made it worth doing in the first place. That was the whole point, in some respects, The Lord Of The Rings could never have been made without that sort of commitment.” 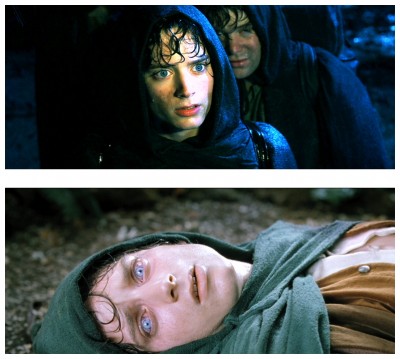 For his part, Jackson garnered the strength to cope with the pressures of the huge production in an unusual, but wholly appropriate place. “When we were shooting Bag End scenes in the studio, we had this wonderful Hobbit Hall with all these tunnels and bedrooms and dining rooms, and it was very peaceful and incredibly comforting. So I would just go on the set before the crew arrived in the morning and imagine myself sitting in Bag End. And then, later in the day, Ian McKellen would be there as Gandalf, and Ian Holm as Bilbo, and Elijah Wood as Frodo. I felt as if I was the luckiest guy in the world, really, because everyone else will get to see it on film, but I was one of the few who got to actually sit in Bag End with Gandalf and Frodo. It really did feel like a storybook come to life.” Before wrapping up this article I’d like to thank the extensive documentaries featured on the DVD release of The Fellowship Of The Ring, namely Welcome To Middle-Earth, Quest For The Ring and A Passage To Middle-Earth, for assisting my research. I’m allowed one good film per year, and that was it, I hope you enjoyed it. If not, I’ll be back next week to submit for your approval the usual B-grade wannabes for…Horror News! Toodles! 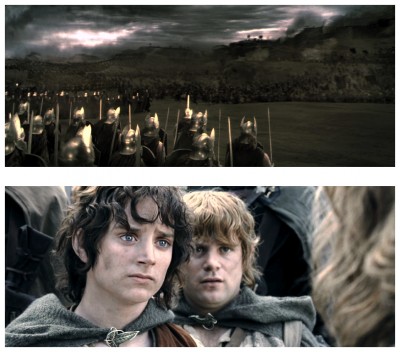