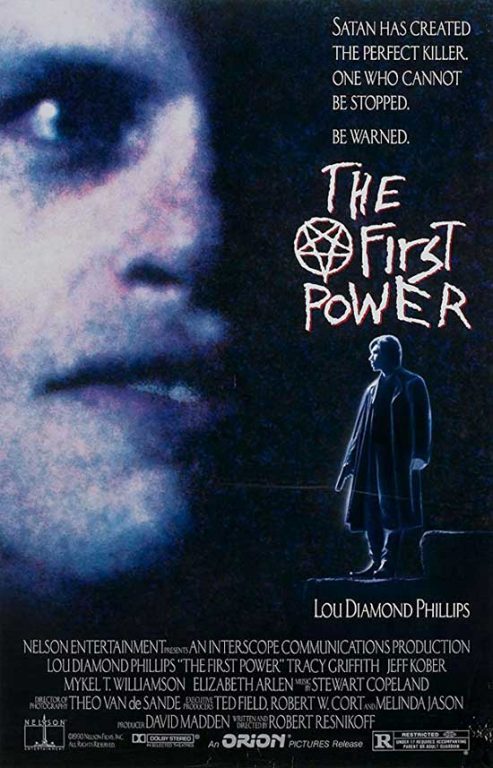 “A dedicated L.A. police detective and a female psychic must stop a demonic serial killer who was given the powers of resurrection, teleportation and possession.”

Written and directed by Robert Resnikoff, The First Power turns thirty. This is a movie that I have always remembered and watched. Jeff Kober portraying Patrick Channing. Kober starts off with a mask on, playing one of his creepiest characters. Patrick Channing is a serial killer and Lou Diamond Phillips is Detective Russell Logan, a man on a mission with his partner, Detective Oliver Franklin (Mykelti Williamson) trying to stop him. Logan gets some unexpected help from Tess played by Tracy Griffith.

The First Power keeps you on edge. Logan and his team are staked out trying to catch Channing’s in the act. Oh, they catch him. He is lurking and grabs Carmen (Sue Giosa). Logan winds up chasing him down, fighting with him. Logan has lost his cool and Channing know they are calling the “Pentagram Killer.” 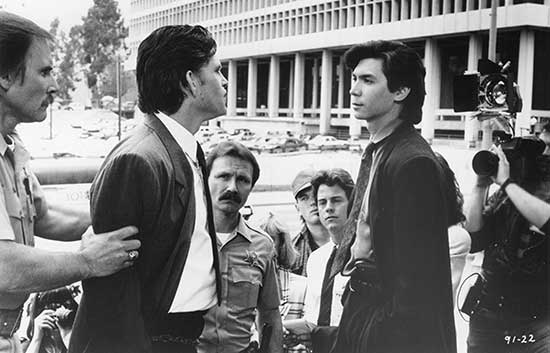 In a horrific dream sequence, Logan sits through Channing’s death and he comes back to life and tries to attack him. (The stunt-double is pretty obvious when Channing is breaking through the window before the attack.)  Meanwhile, Logan is called to a homicide. Carmen was found killed with an upside-down pentagram carved into her stomach. Tess is heading in to talk with Logan. Tess has a “vision” and sees Channing. Kober looks calm, cool and collected portraying serial killer Patrick Channing.

Logan meets Tess and learns that she is the person who was calling him and warning him. Logan thinks she is a hoax. Tess explains to Logan that Channing isn’t dead but a bad spirit. The cops bring in a man that they claim killed Carmen. He is completely catatonic. When Logan starts to walk away from this suspect. This man is gone, not here. Logan hears, “See you around buddy boy.” This is Channing’s creepy catch phrase.

I love when Tess tells the detective following her, “don’t bother lying, its all over your aura.” While Tess is out and about shopping and being followed by the detective, Franklin and Logan are searching through her house. Tess comes home and finds Logan and Franklin. Logan still doesn’t believe Tess. He thinks Tess and Channing are in this mess together. Tess is “psychically” connected to Channing. 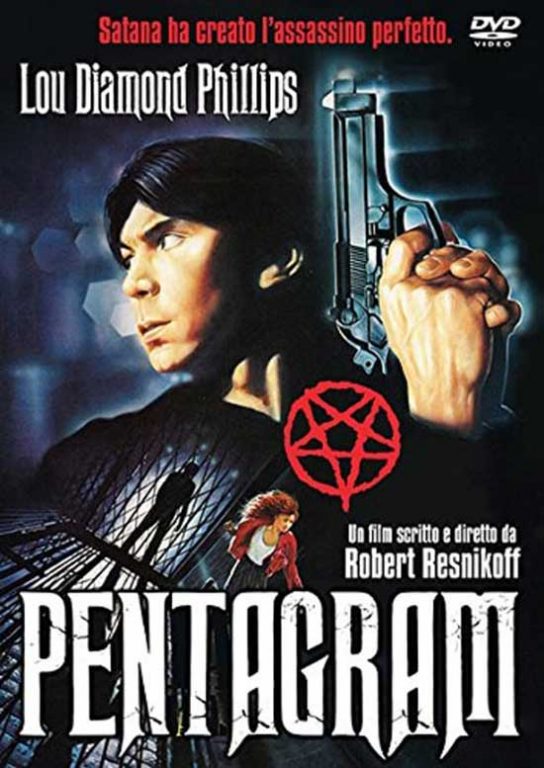 Franklin is freaked out after Tess tells him he is in danger. It is hokey or too far out there. Logan makes Tess go with him to where Channing said he would be at. Logan heard a message on Tess’ machine but it wasn’t there anymore. Poor Franklin winds up badly hurt after Channing comes barreling through a crowd of people in a horse drawn carriage. There is action, drama, some romance factors in this movie. I always found this movie fascinating because it’s a cat and mouse game. Channing is tormenting the hell out of Logan. Kober plays this role so good. He is one of scariest characters. Logan winds up chasing Channing and Channing jumps off a ten-story building.

Channing is killing again and it gets creepier and more gruesome. He hangs one man from underneath a bridge as if he had been crucified. Mazza (Clayton Landey) crucified with an upside-down pentagram carved into his chest. It is a copycat? This movie seemed to one of those films that future movies would borrow plots, take little catch phrases form and try to recreate such a horrific character as Channing. I don’t think anyone at all could have played this man the way Jeff Kober did.

Poor Logan is frustrated. He heads to church, naturally you would think this would be the good thing to do. This scene creeped me out. I remember my friends and I watching this (I had a weird childhood. I always loved horror films and it was better than the real horrors of life.) Logan winds up in a confessional. He is trying to figure out if the spirits of the dead can return and take over the bodies of the living? The priest however turns into Channing. You aren’t sure if Logan is hallucinating or what? We see Channing dressed as a priest and tormenting Logan. Superhuman strength, creepy abilities. 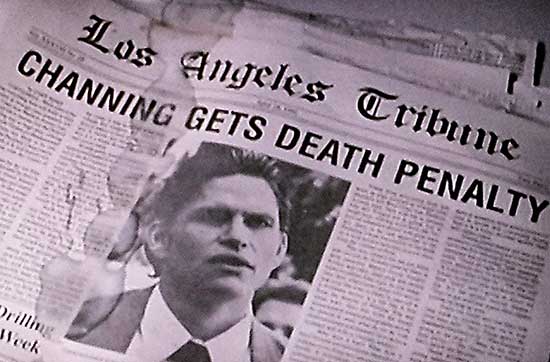 Logan winds up on a wild goose chase. The mystery and suspense, you never know who it could be? He shows up at any time. The dark and horrible buildings. Tess has a vision of Logan taking an axe to the head. She is on her way to “save him.” The mask Channing wears is out there. He steps this game up to an entire next level of insane.

The ceiling fan scene with the fan is one of the wildest scenes in the movie. The First Power is gritty and the shots are great. Tess and Logan to see Sister Marguerite (Elizabeth Arlen, D.O.A., National Lampoon’s European Vacation). Tess tries to talk to her about the first power, the Sister doesn’t want to talk about this again. I guess you know it’s really bad when the nun doesn’t even want to help.

Bill Mosely turns out to be the bartender. It was great seeing Bill in this movie. He portrays some incredible characters. Tess and Logan to see Channing’s grandmother. There are some interesting references and random things throughout the film that pay homage to Hitchcock and it was interesting they decided to talk with the grandmother.

They learn that Channing’s father was his grandfather. It’s a horrible story and Tess sees some of happening. Tess takes off, she is heading to the part of the “cities old water system.” It’s the only place Channing ever felt safe. Tess is traumatized and seeing pentagrams in her hands.

Sister Marguerite is trying to help after sending Tess and Logan away. Logan and Tess are in a race against time. Tess knows Channing will kill again. The story, the cast and the way they sort of keep you guessing. It makes for a great film to watch and Tracy becomes involved even more now that Channing knows he can get to her. 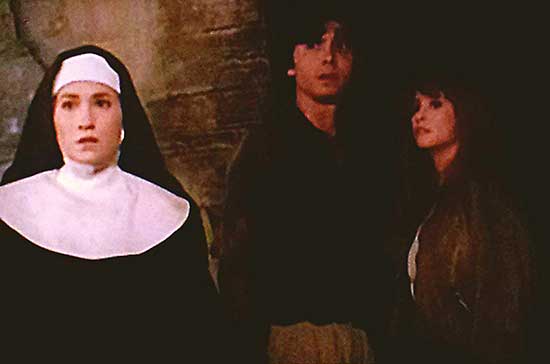 Logan is frustrated beyond belief. Tess tries to explain how Channing gets into people. Logan and tess have a bit of a romantic moment. That is interrupted by the Salem’s Lot Bag Lady (Nada Despotovich). “The bag lady, she was outside the window.” This scene happens fast, the bag lady was floating outside the window, Logan and Tess take off running. The bag lady winds up in the car with them.

Logan has to go see Sister Marguerite. She explains the three powers and the first power again. She tells Logan how to stop Channing and save Tess. Channing took Tess to his dark place. Every serial killer, possessed demonic force has a place they go to hang out and worship, whatever it is they are worshipping. You start to get concerned about the Sister. 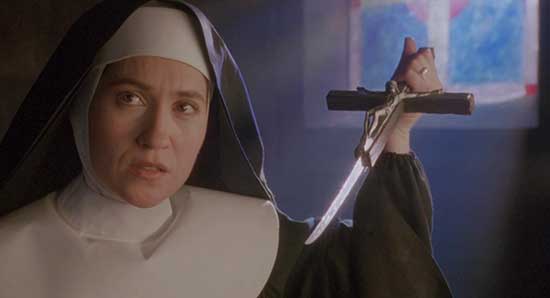 Tess and Logan start to escape but Logan goes back for the Sister. She’s not Sister Marguerite anymore, she is Channing. A possessed Sister Marguerite seems to be the worst and most powerful of the people possessed. Logan tries to use reverse psychology and he tries to wear him down. Tess comes back because why not!

Logan and Channing wind up fighting. Tess releases the water and it is chaotic. Channing almost gets Tess. More fighting and Channing just don’t quit. The First Power holds up today, thirty years and Kober took on this creepy character. Robert Resnikoff delivered a scary, supernatural film. The ending gives you goosebumps. You just picture this nice guy Jeff Kober, I was able to meet him and then you see this movie and he plays Channing with so much energy and that calm, cool and collected scary power his character has.