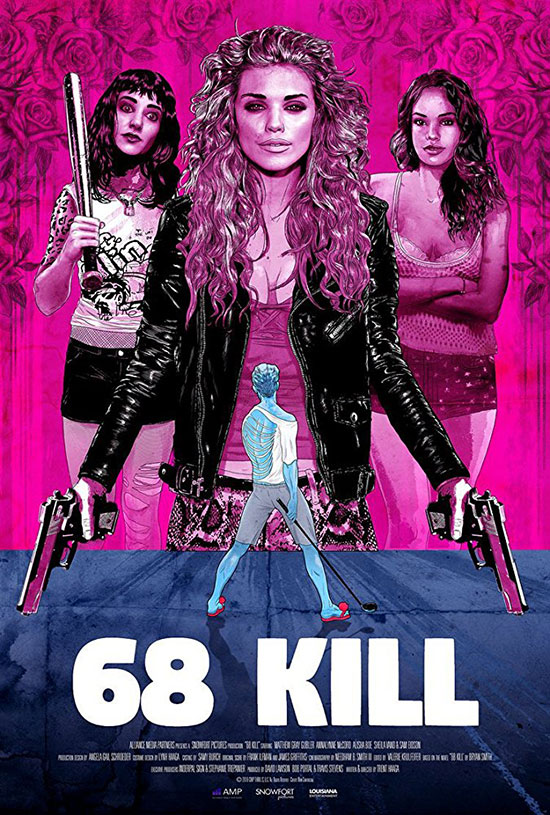 A punk-rock after hours about femininity, masculinity and the theft of $68,000.

There seems to be a trend as of late that I’m really digging coming out of the film industry, this trend of course being a rush of balls-out cinema pieces fueled towards violence, comedy, and chaotic absurdity. With movies such as “Mayhem” and “Brawl in Cell Block 99” keeping the train rolling we have another that fits the bill quite nicely. This of course being the review at hand “68 Kill”. The movies stars lovely actress AnnaLynne McCord who plays her best bad girl with almost effortless conviction.

AnnaLynne McCord stars as Liza, a raunchy sex -obsessed bad girl who decides that life needs to raise the bar a bit. Who up to now had been working the seedy aspects of life, Liza decides that robbing a client of hers for the $68K that he just received is the path to better days. Enlisting her boyfriend boy-toy Chip (Matthew Gray Gubler), the 2 of them set off to rob and dash. Though the robbery turns into a murder spree which is better shrugged off by Liza than Chip. 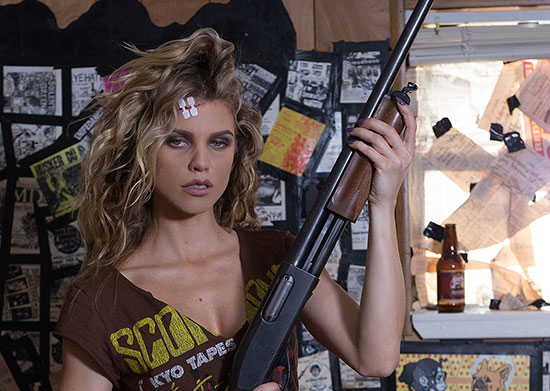 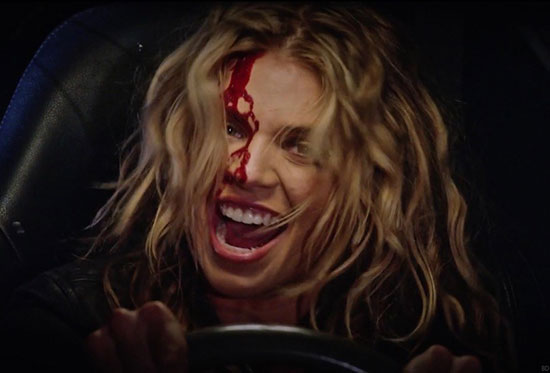 This trend of nastiness, killing, and surprise violent acts appears to be the MO for this film Taking the viewers on a journey that can only be described as having a Tarantino-esuqe flavor to it. Now when I say Tarantino I’m referring to aspects you might find influence from such as films: “True Romance” and “Pulp Fiction”. Though that statement is only meant to give further kudos to director/writer Trent Haaga efforts who has done his homework in providing a film that fans can sink their teeth into. It is not everyday that a film feels cult-like right out of the gate, but I’m calling “68 Kill”, a film fit for that description.

The film moves from one nasty act to another pitting Chip right smack in the middle of it all. Surprisingly though it is the female characters of this film that take the spotlight by being one step nastier than you expect with more thrills per minute and surprises than you’ll ever see coming. “68 Kill” is brilliant in that while it is Chip that plays the “sometimes” victim of this whole ordeal, he is also the one who ends up becoming empowered thru the movie’s experience. The 3 main characters include: Liza (AnnaLynne McCord), Violet (Alisha Boe), and Monica (Sheila Vand), all of which are cast in dominant roles designed to flip the tables on expected viewer perception. 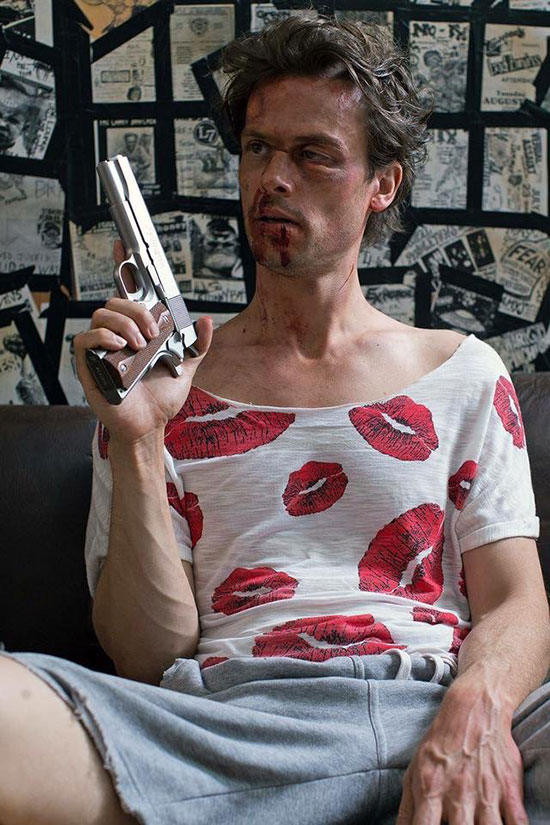 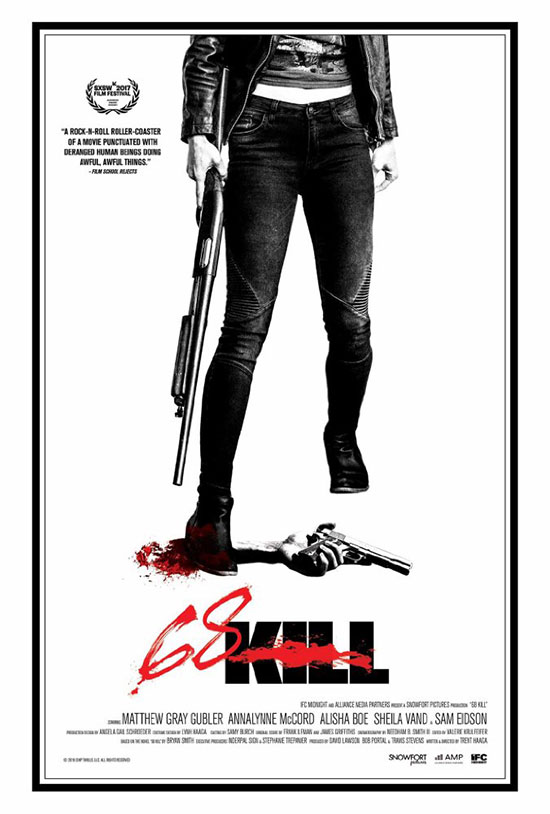 The story here centers on Chip trying to move on with Liza pulling him right back into the chaos. Though it is the journey that Chip encounters which moves along the plot line of this movie. From one femme fatale to the next, Chip is faced with facing his situation and trying to move past the beauty of hard seductive women and the trouble they bring.

It’s my suspect that the film was designed to do more than just entertain with many of the key females being over extremely empowered, free of ethics, and ready to pop a bullet in anyone who gets in their way. This aspect “could” be a direct influence from the real life political mess that has woman coming forward with cases of abuse and mistreatment, though it could also be just great timing. none-the-less. In short, it does what it set out to do. 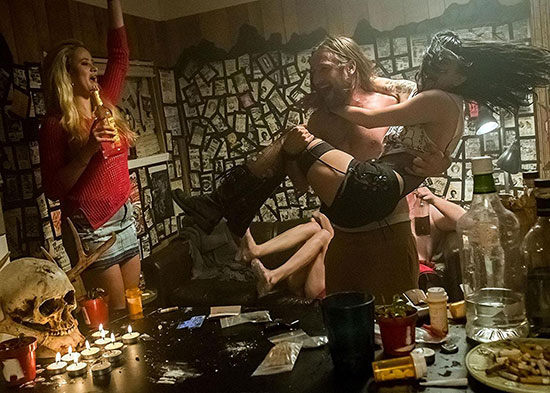 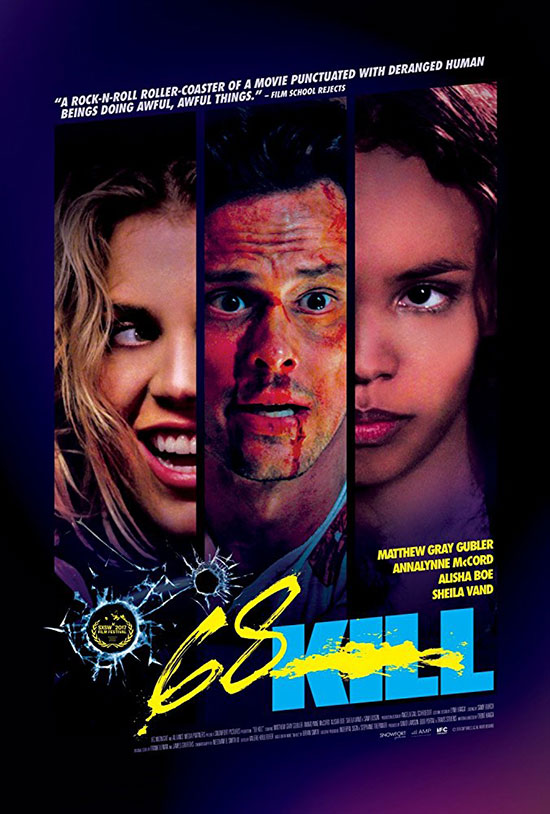 What really works for this film is that actress AnnaLynne McCord is really enjoying playing the bad girl and laughing about it all the way. Though she also sets the trend for bad girls who have to deal with more bad girls.

“68 kill” is cult flavoring designed for cult lovers. So if you are a fan of stylized movies like “True Romance”, then this one moves with that same appeal. The fun here is in the experience, so I don’t want to reveal too much, but take my word for it, this is one hellava thrill ride action film!

68 Kill in available on  bluray from Shout Factory