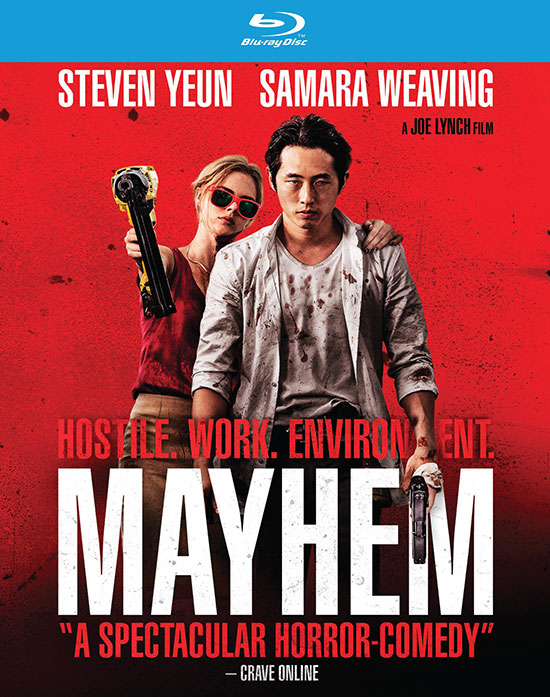 A virus spreads through an office complex causing white collar workers to act out their worst impulses.

Mayhem (2017), a brilliant new from film director Joe Lynch of whom you might remember from the TV series Holliston, (among several other horror film directing titles) has delivered his best to date. The movie featuring “The Walking Dead” actor Steven Yeun as Derek Cho in a starring role is an inventive balls-to-wall 2017 release that should definitely make your-end of the year play list.

Coming straight off reviewing the equally visceral end of year 2017 release “Brawl in Cell block 99”, I am finding that there have been some seriously cool action-violence-drama–comedic release waiting in the wings. Though digressing back to the film at hand, Mayhem (2017) is exactly what it’s titled. The idea of office violence breaking out is not new, films like “The Belko Experiment” and “Bloodsucking Bastards” paving the way, however I wouldn’t say that a few well deserved releases of this type are not welcome.

The idea of horror films taking place in the corporate office is an idea well worth pursuing with so may of us finding the relationships to the core ideas being relatively familiar if not perceived in our wildest fantasy/ nightmares. This idea has found its way into a few movies over the years with older releases like “Resident Evil” digging into the evil corporation viral breakout idea and fully embracing this environment. At the core, like the Walking Dead series itself, there is another agenda at play, the evil personification of corporate abuse and politics taking to the fantastical and macabre for our entertainment. 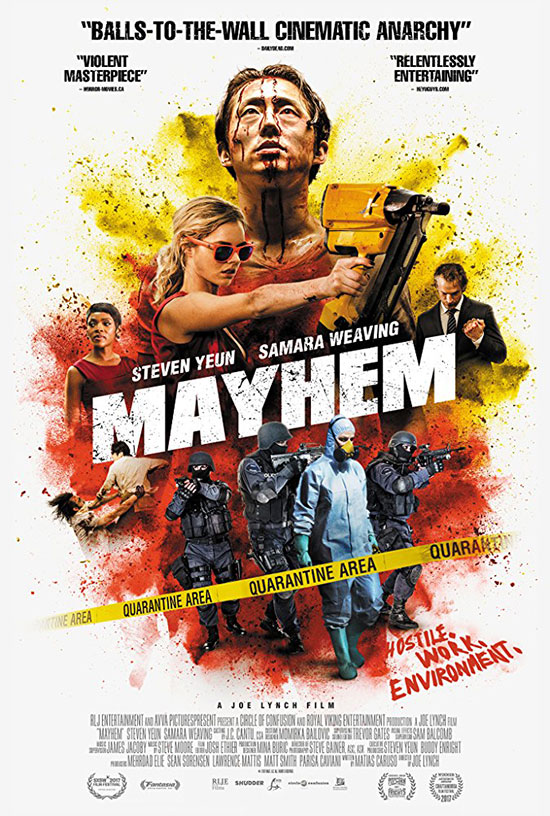 One might even look back to real life scenarios such as the Elron days as being all too familiar to this idea (with out the violence and bloodshed). Though for alot of us, we don’t mind watching the little guys on the totem pole work their way up to the corporate penthouse in order to teach those occupying it a few nasty lessons. 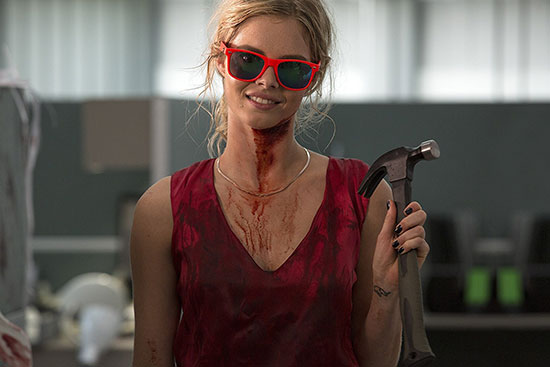 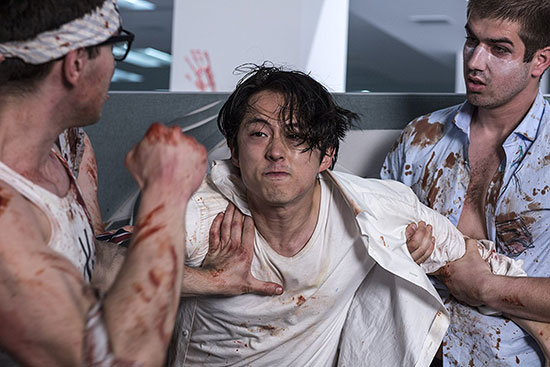 Mayhem takes 2 ideas, a viral outbreak and a literal climb up the corporate floors to take out bad guys. Steven Yeun as Derek Cho is a typical almost stereotypical model of a corporate worker who reaches for the sky and finds that it might not be what it was cracked up to be. An ambitious hard working lawyer, Derek Cho is finding that corruption has worked its way into cases involving innocent people as well as the occasional screw up that is diminished by someone taking the fall. 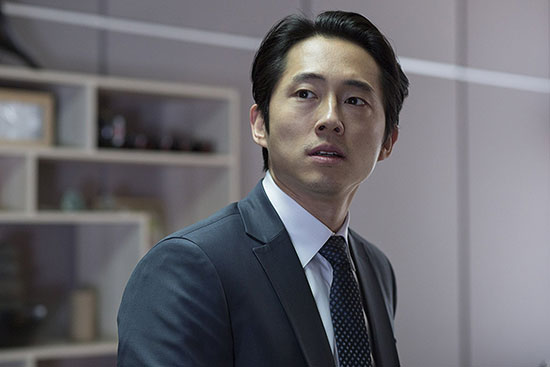 The corporate leads live in excess thriving on being untouchable as they weave clients into false beliefs while covering up the mishaps. Derek Cho is beginning to see it all for what it’s its worth, though he finds that others above him have firmly planted their feet into making sure that Derek is the one to take the heat rather than those responsible. A recent event results in Derek losing his job by doing the right thing just on the cusp of a viral out break. 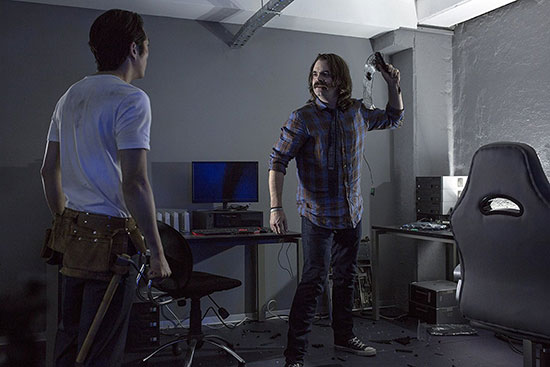 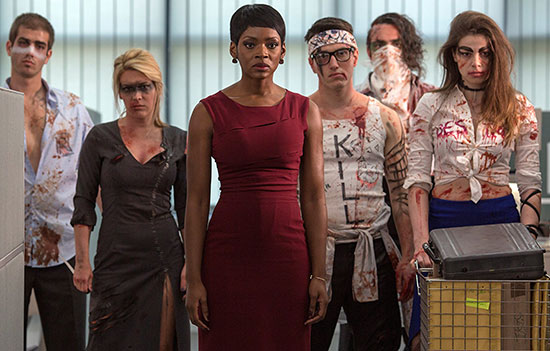 The viral outbreak is a recent epidemic that causes all infected to lose their inhibitions and revert back to their carnal instincts, Because of this, those infected are quarantined and not blamed for the actions of the virus. As you can guess, the entire corporation is infected resulting in mass hysteria, madness, and violence (not to mention breakouts of sexual misconduct). In short it is chaos through out the entire building until the virus has run its course. 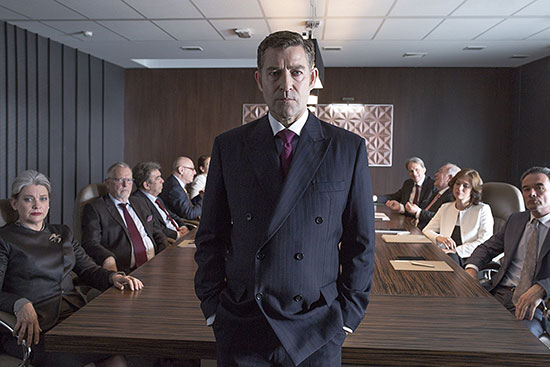 Derek decides to fight the system (now infected himself) bringing along a client Melanie Cross (Samara Weaving) who was just screwed over by the corporation. The 2 of them armed with a nail-gun and various weapons work their way floor by floor taking out co-workers along the way. It’s a glorious much deserved payback of violence to absurdity making this bloody film comedic just in that sense alone. Actor Steven Yeun does a bang up job working hand in hand with Matias Caruso’s script and Joe Lynch’s directing. Let’s just say its an all around good match up. 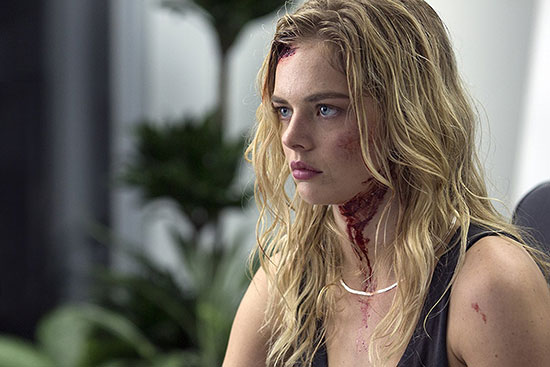 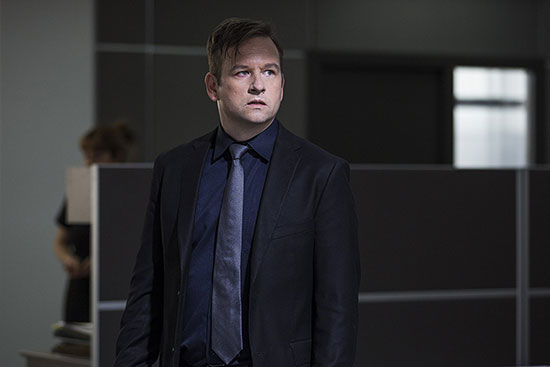 This brings us to the closing of this review. If you haven’t gotten the clue yet, this is one to watch and own! Actors Steven Yeun and Samara Weaving work great together along with Steven Brand, Caroline Chikezie and Dallas Roberts playing the formidable antagonists to do battle against. It’s bloody but damn fun to watch, so take my advice and please do so!