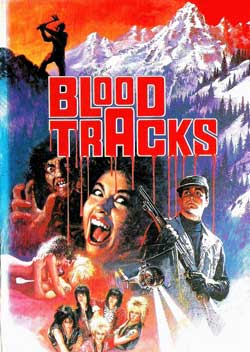 A hair metal band heads out to the snowy mountainside to film their new video only to get trapped there by an avalanche. Just when it seems like things couldn’t get any worse they become targeted by the bizarre murderous family that live in an abandoned factory in the area. Before you can say The Hills Have Eyes the bodies start to pile up.

Over the past several weeks I have watched a lot of heavy metal horror movies. Some of them were awesome (Such as Black Roses), some were so bad they were good (Rock ‘N’ Roll Nightmare I’m looking your way), and some were just flat out terrible (cough, cough, Rocktober Blood). I guess that Blood Tracks falls somewhere in the middle. It wasn’t great but at the same time it certainly wasn’t the worst slasher flick I’ve ever seen that featured a glam rock band getting killed off one-by-one. Despite the fact that it has its flaws (and believe me there are many) I still genuinely enjoyed it and dug it for what it was. 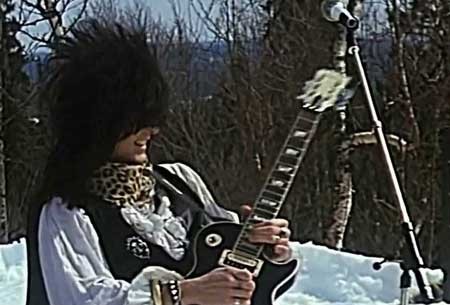 While it isn’t the most original horror film of all time (think The Hills Have Eyes set in a snowy area instead of the middle of the desert) I still thought that it was a pretty fun movie for the most part. I went into it expecting it to just be a nice little slasher flick I didn’t have to think too hard about and that is pretty much what it was so I wasn’t too disappointed. 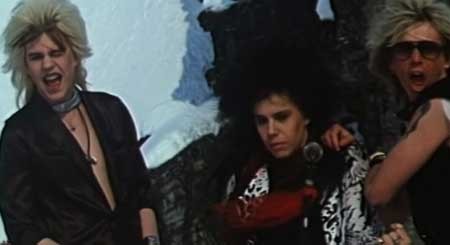 While it tends to drag a little bit at times early on and takes a little while to get going it is worth the wait when people do start to get killed off. I really liked the setting (other than Iced, Dead Snow, Snowbeast, and a handful of others we don’t really a whole lot of horror films that take place in a snowy area) and thought that it was a nice change of scenery. I also thought that having an avalanche trap everyone in the area was a cool touch as well as it prevented them from just leaving the area once the shit started to hit the fan and made it easier for the demented family to pick them off whenever they wanted (because hey, you know, it’s a slasher flick and there has to be some reason that the intended victims can’t escape). 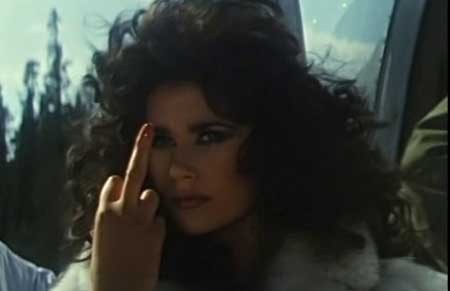 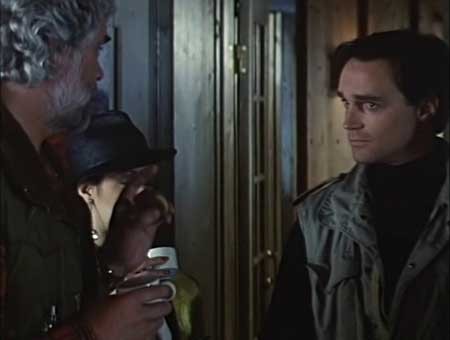 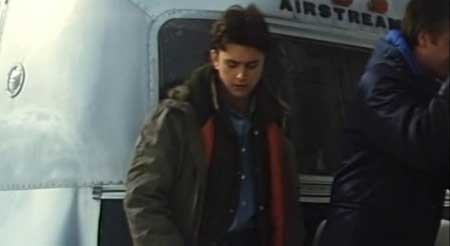 I also enjoyed the fact that the movie actually has a pretty impressive body count. While some of the death scenes are a little better than others we do get some pretty cool ones from time-to-time as the movie progresses. In addition to a decapitation, a dude set on fire and some poor bastard having his throat ripped out by someone’s death we also get some assorted stabbings, a mighty painful-looking impalement, and a cool trap that rips some poor chick in half that even Jigsaw from the Saw movies would be proud of. I thought that the film had a ton of some awesome gore so I am assuming that I saw the uncut version as I’d heard that a lot of the blood and guts had been cut from the movie. Being a guy that digs his bloody death scenes I wasn’t let down by Blood Tracks and had a blast watching many characters meet their gory and painful demise.

While there were some things about the movie I liked there were also others that I wasn’t too big on. I thought that the characters were pretty bad and the acting left a lot to be desired. The band in the film (played by the actual band called Easy Action) was mighty bad and I don’t think a single one of them could act if they had to. I thought that the demented family members were pretty crappy too and even though they were supposed to be scary and intimidating I think I might feel the need to laugh more than anything else if they ever actually came after me. The movie is pretty corny at times as well and even though there were a lot of scenes that weren’t supposed to be funny I found myself giggling at them anyway (don’t even get me started on the goofy performance that the band gives at one point that makes bands like Winger, Kix, Enuff Z’nuff, Giuffria, and Krokus look awesome in comparison). 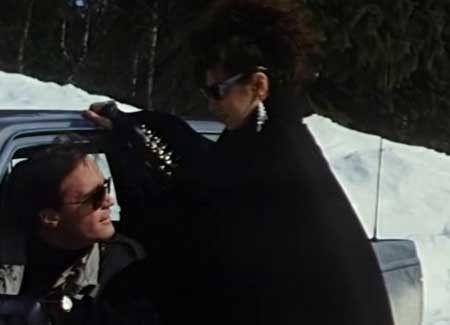 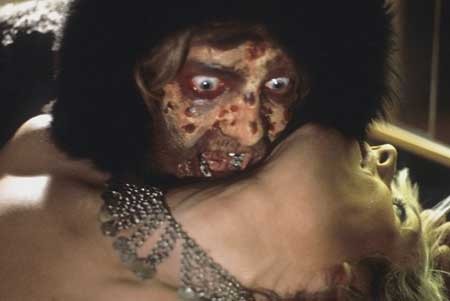 Blood Tracks was sort of a mixed bag for me. On one hand I did enjoy certain elements of it while on the other there were some things that just didn’t work. I didn’t hate it but at the same time I don’t think that I can say that I particularly loved it either. I thought that it just okay in general and while I don’t regret watching it I think it will be a while before I sit down to watch it again. If you go into it not really expecting that much from it you may really enjoy it, but just make sure that you don’t take it too seriously. Check it out if you don’t have anything better to do, it’s a good little timewaster and you could totally do a lot worse.