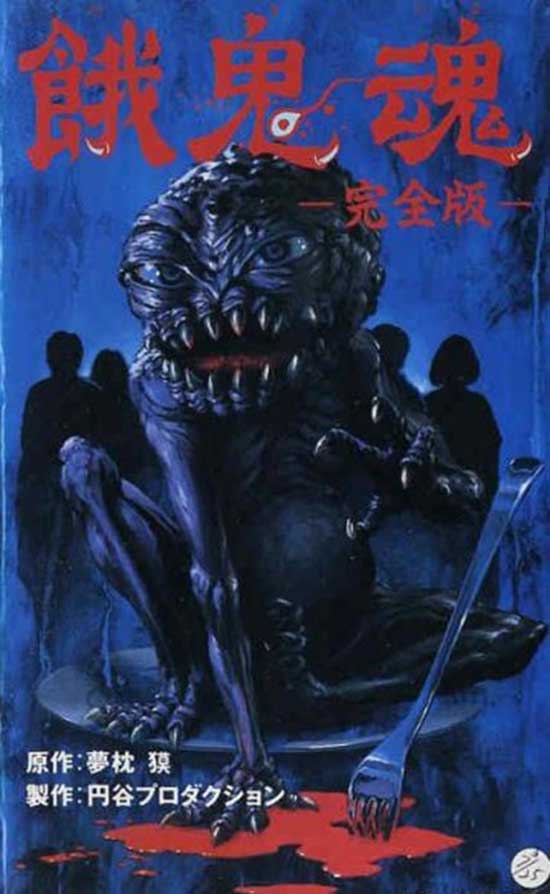 A police officer doubts himself after saving the life of a notorious and ruthless killer. His actions come back to haunt him when the killer and his gang become suspects in a bloody armed robbery.

Anyone who knows my taste in horror will know that the 1980’s is quite possibly my favourite era of this wonderful genre. So many of my favourite films were made in the 80’s and many of them have one thing in common: monsters. I do love a good creature feature. Puppets, animatronics, and good old-fashioned special effects is how it should be done in my book. With this in mind I was quite excited when I received a copy of Gakidama, a straight to video horror romp from Japan, that has eluded Western audiences for way too long. Directed by Masayoshi Sukita, this outlandish story mixes traditional Japanese folklore with modern horror elements, blending into a 54 minutes of fun packed action. Spoilers ahead. 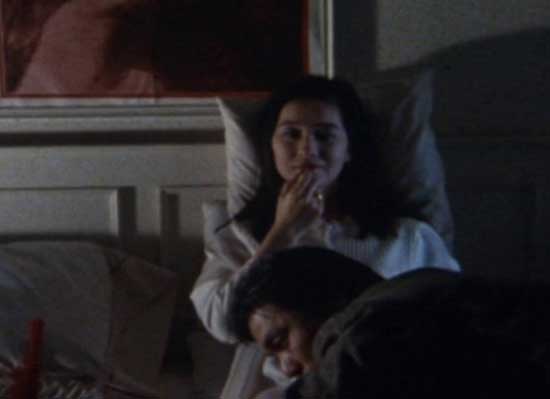 The story starts with two colleagues, Mr. Morioka, a reporter on the paranormal and photographer Kitayan, famous for catching ghosts on film, heading to a remote forest where a spirit called hitodama (a soul that has been detached from its human body) has been sighted. While the trip ends up being a success and the two men indeed find a hitodama floating around the nightly forest, they also encounter something much more sinister; a gakidama (hitodama that eats meat. As a side note I would like to add that as far as I could find, Gakidama is not a real creature in Japanese mythology, but seems to be just a figment of the scriptwriters imagination). This nasty little creature sees its chance for a host and crawls inside Mr. Morioka’s ear while he is distracted by the hovering lights of the hitodama, thus possessing his body and mind. Soon after returning home Mr. Morioka is plagued by endless hunger and consumes everything and anything on sight. His body begins to change in weird ways and in no time at all he finds himself giving birth orally to the now fully grown gakidama that has been growing in his stomach. Luckily for Mr. Moriako and his wife a masked stranger appears in their house (as you do) and captures the creature before it can do too much harm. He very helpfully advices Mr Morioka to seek medical help for his dislocated jaw, you know, just in case he didn’t think to do that himself, and then disappears with the gakidama locked in a birdcage. However, this apparent expert on gakidamas is not as skilled ay his job as it would seem and manages to get bitten in the face and let the creature escape. 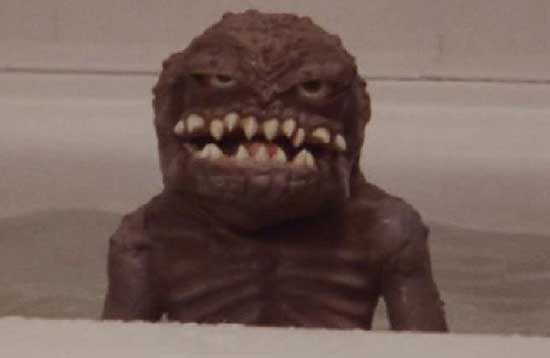 Sometime later, after recovering remarkably well from his recent jaw injury, Mr. Morioka rather strangely finds himself craving for the flesh of gakidama. Convinced that Kitayan is now also possessed by a gakidama, he follows his friend around trying to figure what to do with this newfound desire. Fortuitously the helpful masked stranger once again appears and offers to cook a creature he has captured for Mr Morioka and the two head out for a sumptuous banquet of ghoul meat. Meanwhile the gakidama that grew in Mr. Morioka’s stomach returns to his house to terrorize his wife. Earlier on she had expressed her maternal feelings towards the little bugger, as she herself cannot get pregnant and this creature, no matter how ghoulish, grew inside her husband after all. However, these tender feelings soon change into full on destruction mode as the gakidama attacks her repeatedly.  I won’t give away the rather interesting ending here, but let just say it’s worth waiting for.

This rather unusual and curious set of events is squeezed in to measly 54 minutes. It hardly sounds like enough to tell such a story but amazingly it somehow works. The pace of the film is understandably fast, but not so much so that it would leave the viewer confused. I do have to say that I did get a distinct feeling that some of the film, maybe an extra half an hour or so, was left on the cutting room floor, and the story was perhaps supposed to have a slightly more context to it than what it actually does. The appearances of the masked stranger, the ghoul banquet and the side plot of Kitayan’s possession were all dealt with in such a speedy and to some extent, disjointed manner, that it certainly made me question whether some key scenes were missing. It didn’t spoil my enjoyment of the film, but simply made me a bit curious about the original script. 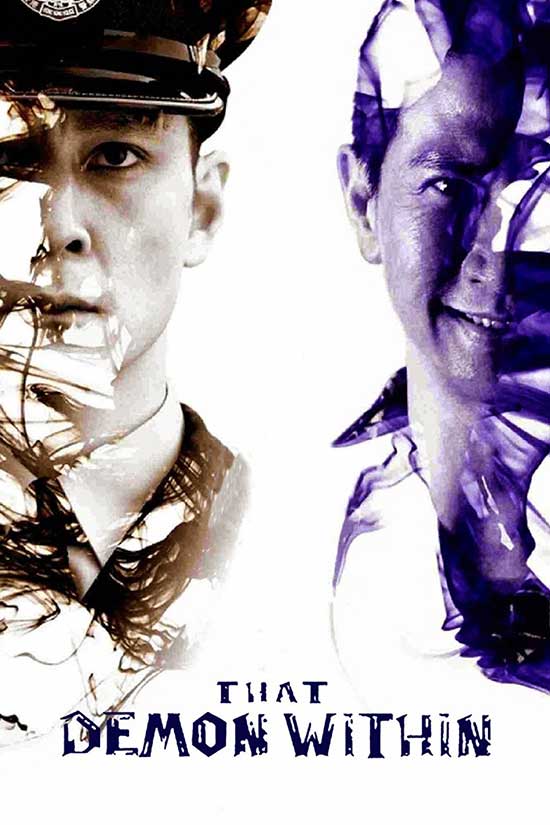 Possible missing scenes to one side, I found Gakidama an incredibly entertaining experience. As stated before, I am a fan of creature features, especially those from the 80’s, so to get to see a film that I’ve never even heard of, was a delight.  The special effects are a mixture of very clumsy and halfway decent. The scenes with the gakidama climbing walls and jumping about are incredibly awkward, with a stiff rubber puppet being crudely maneuverer by unseen hands. On the other hand, some of the scenes of birthing the gakidama and the creature squirming inside its host are decently executed and even have a bit of gross out factor to them. It all had a distinctly 80’s feel to it which warmed the heart of an old horror fan like me. 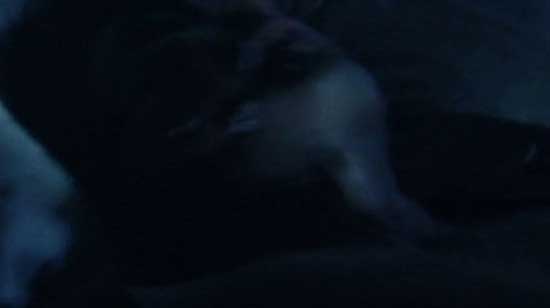 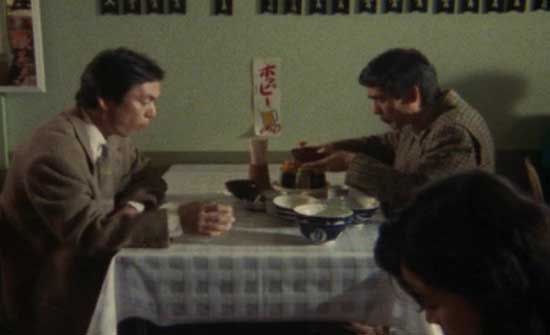 With its short running time, relatively off the wall plotline and more comical than scary monster, it’s kind of hard to see Gakidama as anything but a cheap creature feature following in the footsteps of other, more successful movies of the same era. However, within all the madness there is a slightly deeper, shall we say, Cronenberg-esque themes to the story. Not just because of the obvious body horror, but in its own clumsy way, Gakidama also explores the horrors of more domestic kind such as childlessness, pregnancy and giving birth. I can’t claim that the film reached any great depths with its examination of these themes, but all elements are there throughout the story and the rather disturbingly dark ending certainly hones in to this little subtext. 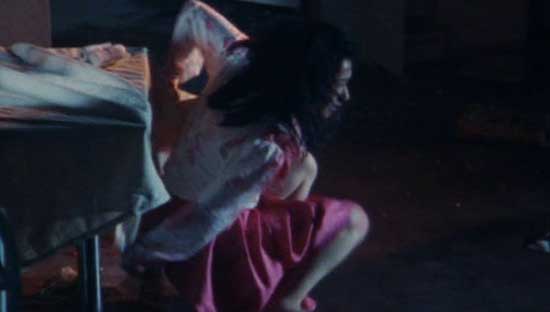 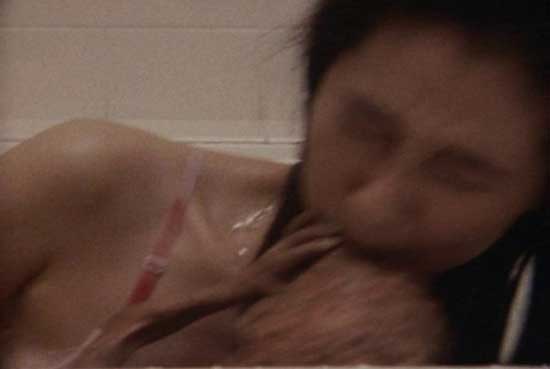 I would whole heartedly recommend Gakidama to any fans of 80’s creature features. It offers some good laughs with its blunderbuss special effects and, on occasion, ridiculous plot maneuverers, but also manages to freak you out a bit. It’s something different from the Western films of the same variety and certainly a film worth seeking out. 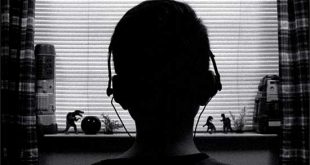