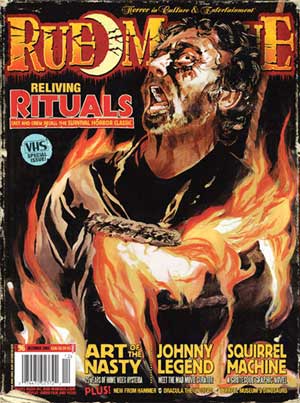 Another turning point for a mainstay in the horror arena, says goodbye to the editorial talents of Jovanka. This issue begins a new phase for the team with a new editor in hand to carry forward. Though a quick glance thru would indicate that most of what we are used to is still very much in tact. Surprisingly though the cover art is dedicated to an oldie resurfaced called “Rituals” (the Creeper) that I’m willing to bet is as foreign to most as it was to me. I found it interesting that they would feature this title as there cover focus. Which raises 2 questions, is the movie any good and does it deserve the attention it is receiving as a cover piece with 7 pages within? Well I for one am willing to check it out in the interest of another gem slipping thru my fingers in years past.

I think a renewed fascination for the “video nasties” has found its way to the surface again. We at horrornews.net just dedicated a whole section them, not too long ago and Rue Morgue has done there share of contribution to the fascination. For those who are in the dark….. these are the films that were banned back in the day for too extreme content. Which pales in comparison to the mainstream of horror these days. Still there was quite a few gems that deserve a look. The article details this and a few featured titles to boot. It would be nice to see a video nasties box set, but we all know that will never happen. In any case, you may want to read a bit about the history if your not in the know.

“Still Nasty” ramps us up to modern day nasty with the title “Grotesque”. It appears that the title has been banned by the Brits for its unrelenting violence. Well, I’ve seen the film and I’m going to have to give them this one. It is brutal in every sense of the word and really isn’t for most eyes. Now that statement alone might just as well sell more copies to the gore hounds and torture p*rn enthusisats…so either way it will find its place to those who really “need” to see it.

Johnny Legend may be a name form the past that deserves a bit of credit. His story about the cutthroat business and the films he’s been involved with is pretty intriguing. I have not seen any but probably will also indulge now that I know a bit more about the man. My first thought was….is he that guy who shows up at the end of “Hellraiser”?? um, I suppose not, but he just as well might be.

The issue continues in its features and reviews on just released materials ……though hold the phone….Kiss is mentioned! Yep Bowen’s basement gives a nice homage to the Kiss flick I own a copy as should every one who grew up with the foursome. The film is as cheesy as it gets….but, its a good cheese that makes me smile. It also asks the question, wouldn’t it be cool to see “this” film remade? – wouldn’t it??

There’s another feature on a vampire novel……….. but yunno I’m just really vampired out right now. I’d love to see more on …hmmm, how bout “Cenobites”….maybe that wish will come true in future days.

Well if the latest addition is any indication its a homage to a bit of old school and obscure. I’m perfectly fine with that seeing that we can only take so many articles about Jennifer’s Body or such and such’s remake craze. Rue Morgue is still as pretty as ever even though the prettiest star has left the building. Stay tuned for further editions…