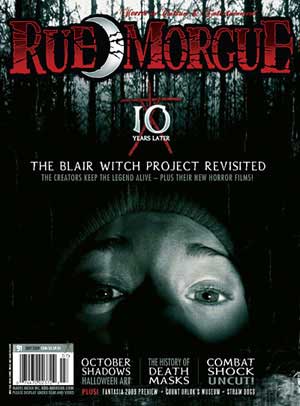 The feeling of Blair Witch is in the air, as it’s noted on the latest homage cover of Rue Morgue #91, 10 years have passed since the uniquely frightening and groundbreaking film first arrived on the scene. I remember the time quite well as friends of mine passed around early bootlegs of what they were calling a true story.
In the latest issue Rue Morgue visits some of these memories and interviews the original directors of Blair witch Daniel Myrick, Eduardo Sánchez.

. Much of this covers a bit of what we knew already and some we didn’t. We read countless tales about the low budget operation that was directed per note cards and handhelds. We heard how this little film caught on in a big way and changed the state of the industry. However more is revealed how Artisan ruined the franchise with corporation tactics rather than a place of honesty that the original film emanated. The 2 directors though have been keeping busy and from the films I’ve seen of there’s are quite good at that. While the directors hint at a prequel to the film, I’m guessing that if a buzz arises again..that preqel will find a home with a studio willing to take a chance on it.

In “Headlines” they investigate the film festival known as Fantasia. As we can probably guess there is much work in viewing time that goes into a film festival. Mainly the screening of tons of films that are trying to be the next best thing. The short article tells of the behind the scenes work that goes into that process, which receiving 50 films to review sounds like a horror fans dream , but I can tell you from experience, that “that” many hours of viewing time becomes work plain and simple. Great insight though and the workings of the festival circuit.

Strangely the most interest came in the form of a small report on the “Millennium” movement that has started. Being a huge fan myself, its great to see when fans take the initiative to prod the industry to giving us the materiel that were respond to. “BacktoFrankBlack” is one such project that goes beyond simple fan pages and memorabilia. Just the simple fact of seeing “anything” “Millennium” in print again is a step in the right place.

“October Shadows” is an art book that features images of Halloween. The good kind, the creepy, nasty and frightening. Upon reading this, it became an instant note on my to do list this year for books to check out. Just the imagery included in the article is enough to spark some interest …looking forward to this one!

“Death masks”? No not a horror film, but a practice that is long out of sync. Nick Reynolds is hear to revive the artform and bring back a bit of its culture. This article discusses some of the background and a few peaks at existing death masks

Other features of course include film reviews, book reviews, game reviews, reissues, comic reviews, music and a few other tidbits of new releases swag to acquire. Out of these another “take note” includes “The zombi Handbook” which sounds like a hoot to check out with its collection of illustration work.

Travelogue of Terror, points out another creep house to visit in your travels along the road tour of madness. Count orlok’s Nightmare Gallery is featured this month for a batch of old school and recent horror icons to check out. I’m glad that someone hunts these things down as it usually take me quite a while to discover there whereabouts to actually visit them. Salem is an area I’ve yet to enjoy, so this one will have to go on the trip itinerary

Last but not least. Gore Melt purges thru the mayhem to discover gory films worthy of checking out. This month features “Murder Collection Vol 1” which we actually got the pleasure of seeing an advance on, however it was this section that prompted me to hunt down “Header” from last issue and take a look.

Great stuff! – plenty for horror fans to indulge in!