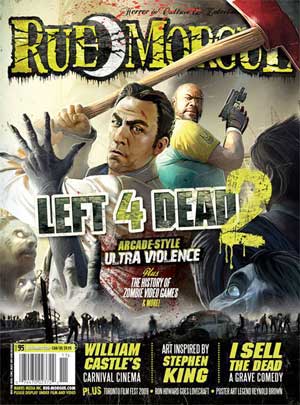 Rue Morgue arrives with the latest issue #95! Sporting a “Left for Dead” cover means only 1 thing….. video games! More specifically horror video games. As we dig a bit deeper we find a section devoted to the onslaught and years of zombie video game releases.

Now seeing that I really am not much of a gamer. I do confess to owning a few game systems for 1 reason. Kill zombies! The intense figure out how to get over the wall release…..just not for me. Give me a gun and some creeps that pop out. That’s my joy. In fact indulging in an old version of Doom still excites me, so as complex as they get..know that there’s some that still appreciate the old school . “Left for Dead 2” is covered in detail in addition which also suggests that audiences are getting more and more immune to violence on screen. Heck, out of all the trailers we upload the ones that are considered red band mostly come in the for of these video games. A look at things to come, I think perhaps!

William Castle is covered in a really slick looking overview of his films. I still hit myself for not requesting the review box set to cover, but there’s only so much time. Of course his biggest film “The Tingler” is covered is addition to all his other creepy masterpieces. Now for me, and this is true story that “Monster of film land” cover creeped the hell out of me as a young buck. “Mr. Sardonicus”…yep that’s the one. Something about creepy smiles……just bust me in the mental chops. Well much older now, I think its time for me to dig into Mr’ Sardonicus” so look for that review down the road here on the site. In any case, I’m glad to see classics get the respect they deserve/ When ever I’ve had my fill of “Jennifer’s body” rip offs, it’s these I tune to.

“A Brush with Darkness”…. wow an art book get sits own 4 page feature? I’m digging this new mind set. Give us more I say. Well a few images reveal some pretty fantastic pieces dedicated to the films of Stephen King. I recognize a few but this one looks like a keeper for the art shelf. Now maybe there’s a chance the book publishers will be kind enough to send us a review copy ;) – PS I just checked amazon and this one lists at $295 ………. holy crap my pants!!!
Now if that isn’t enough then check out this web page:
www.centipedepress.com/skart.html

“I sell the dead” is really getting its’s share of kudus. While we’ve reviewed it and I’ve owned since last year. I haven’t had time to check it out. Maybe its time, wouldn’t you say. Ok, this one gets moved top the top of the stack, promote.

“Graves Mistakes” provides a pretty honest overview of the “Fear Itself” series. I still recommend you all buy the set but there is some up front discrepancies that cant be ignored. I would say if it was a shorter series to pass, but there aren’t some true gems among the “MEH”

“The Goremet” and “Bowen’s Basement” have once again created some intriguing into titles I’ve never seen. Good to stay informed, or these films would never surface.

A fun issue with lots of creeps and ghouls to entertain you. I must confess my biggest joy was to see the ad announcing the release of “Samurai Princess”……. a real gotta have it kind of title!!! I should move there….huh???

So long and till next time!!