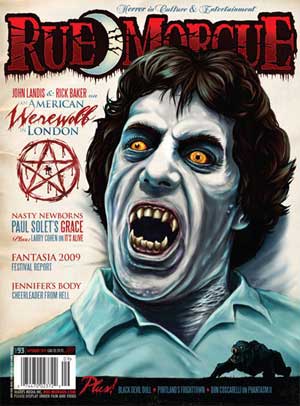 I think the horror magazine cover of the year just arrived. Yes you got it, the latest Rue Morgue magazine features a striking illustration of David Naughton, as he dreams of becoming one of the undead. Hats off to Gary Pullin for the fine piece!

Now without further ado, you are correct the them this month is werewolves coming off the re-release of “An American Werewolf in London” full moon edition. We just reviewed the edition on horrornews.net so you can check that out as well.

“Bad Moon Rise Again”- of course the theme of the mag leads straight into a very well written piece on the AWWIL film detailing a bit of the past, present and behind the scenes that you will also her quite a bit of on the DVD. Most of interest will be the story of how Landis sought for this film to be made and was received rather blandly initially. The studios were blase, the audience were somewhat disinterested and yet it went on to become a FX classic…go figure. How about that red puffy coat…now there’s a blast from the past. I think I may still have mine (in blue) somewhere in storage. Well the important thing here is that the film has found its place in horror genre history and Rue Morgue has provide even more stuff to chew on with 9 pages of various AWWIL aspects and interviews. “Back at the Moors” takes a look at the original Werewolf mechanic prop used. If you7 remember correctly the puppet of sorts was only used sparingly in scenes in the film to reduce costs and overexposure. hmm….any relationship to the “JAWS” model?

Since I found alot of this edition to be chock full of review sections I’ll try and focus on the highlight for me. Tsukamoto completes third Tetsuo film”:…now that’s a welcome bit of news there. Those who remember the classic cyber punk Asian horror release “Tetsuo” will be foaming at the mouth on this one. It appears Shinya Tsukamoto is finally gearing up for his 3rd feature. You can read on for more info on that but short end of the stick is….very cool indeed!

A nice feature of “Grace” is provided, though since I’ve yet to see the film I’m holding off on all readings till after my initial viewing ;)
“Baby Killer” – what’s’ this ? Remember that creepy commercial for It’s alive? I sure do…and confess I closed my eyes every time (as a youngen). Larry Cohen is in the house to discuss his mutant baby prop that scared more than just me on release. The article reveals that the actual release did poorly and was almost shelved by the studios…then the great ad campaign came out with the claw in baby stroller. The film drew crows and grossed $40 million paving way for several sequels… Lesson learned? Never underestimate your marketing department!

Fantastic Film festival wraps and I was glad to see that Rue Morgue gave an overview of each of the films. I’ve seen a few myself, but there’s also a few a here that will be surely added to the list. FYI – the film mentioned “Reel Zombies” is actually hilarious if you get a chance to tune into to it ….I’d ignore the review and give it a go.”Vampire Girl VS. Frankenstein”….when is that film ever gonna get released?…..I live for over the top Asian horror…so this is my most anticipated next to “Geisha Robot”

“I was a teenage Man Eater” offers more on the anticipated “Jennifer’s Body”. Again one I have to watch first before reading …though for now the pictures will do just fine ;)

As mentioned at this point it gets pretty much into movie, comics and game reviews. Though a few page insert features give weight to lost gems such as Phantasm 2. Now can anyone say “box set”…..I’m really waiting for that to get the whole she-bang rather than piece-mealing the collection. Good to see they found the missing piece so that can now happen…Oh, portion of interest on this one….Brad Pitt passed over on an acting role for the original…..shucks..had they have known.

Lastly – Travelogue of Terror is always a bonus! This one profiles “FrightTown”, a Portland Oregon haunt that seems as appealing as it is obscure. I’m marking this down for my next road trip out there…gotta love this stuff!