Ah, we love em, we hate em…those nasty spell-casting witches of film. Witches of cinema are figures we came to know very quickly in life. Most of us got our first dose with the all-too-familiar movie, “Wizard of Oz”. This inclusion was taken even further as we started to see more witches pop up in horror and fantasy-themed films. When we took on the task of a “top 10 witches list” we also discovered that many times lists were being assembled haphazardly without insight as to what the list was asking. For instance….”Darkness Falls” was named even though the film was absent from the inclusion of a witch opting to feature the “Tooth Fairy”  instead. The films “Witches of Eastwick” and “Hocus Pocus” were named despite the fact that they were neither scary or worthy of being called “terrifying”. The White Witch from “The Chronicles of Narnia” is far from terrifying, just as the with from “Oz the Great and Powerful” is unworthy of that classification. So while it’s true that there  are quite a few films with witches in them, they probably aren’t the pick of the litter in the scary department.

We also ran into listings that should have been fine-tuned to list them as cults or covens over a single nasty entity.The movie “warlock” appeared at times who surely made for a wicked male witch entry, but that we didn’t find to be that scary in comparison. Even yet, other times lists would include “witch hunter” films that while containing witches was more about the hunters themselves and the often “mislabeled” witches (innocents who were accused of with craft) from the 18th century.

This brought us to our list which would have been incorrect to merely limit to horror. As new fantasy themed films arose into cinema, so was the inclusion of scarier and more powerful witches that served the purpose quite well. We are confident that new entries will arise on future productions giving reason to expand and re-evaluate our list. For now, these are the picks that stood out.

1- Wizard of Oz (1939) –  Margaret Hamilton as the Wicked Witch
Margaret Hamilton bears the distinction of playing one of the most feared witches in cinema today. Even when we saw her as a civilian in the 1939 film…well, she still gave us the creeps.

1939 was around the time when color was still being introduced into cinema just shy of 1935 (when the first color film was unveiled to movie audiences). Bearing an almost glowing green hue to her skin, the Wicked Witch was indeed an on-screen character that stood out.

The Wicked Witch was not only one of the scariest witches to emerge, but one of the greatest villains of all time . The actress herself was in fact a sweet woman who just happened to have the facial features of a most identifiable character. Margaret Hamilton died in 1985 but still to this day has been unmatched in her Wizard of Oz character performance. While it’s save to say that the wicked witch is dead……really for us the wicked witch lives on forever. 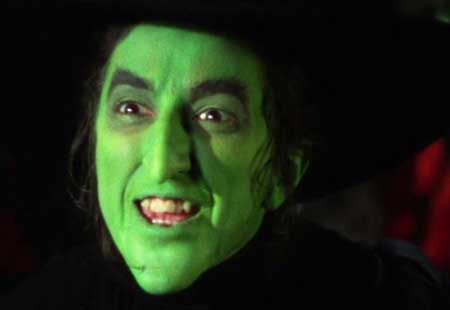 2- Hansel & Gretel: Witch Hunters (2013) – Famke Janssen as Muriel
How can 1 witch be so hot and so scary-nasty at the same time? That notion belongs to one of the most memorable witches on this list, actress Famke Janssen. I’m sure many of us were shocked when we saw our beautiful Famke transform back and forth between sexy and nasty-ass in this great witch film.

“Hansel & Gretel: Witch Hunters” is a film that contained enough nasty witches to fill this entire list. The witches were evil, powerful and were available in numbers in this 2013 film. The movie had it all and remains one of my favorites from this list. Muriel, the head witch, was indeed a scary one…. and so finds a place nicely on our listing. Proof that sometimes famous models also make some of the scariest witches?….. well, I’m a believer now. 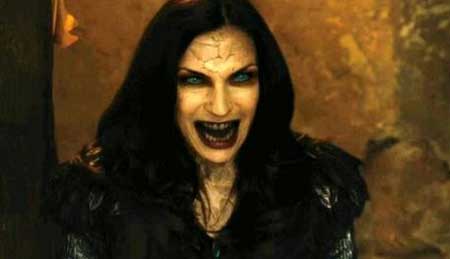 3- The Wicked (2013) – Cassie Keller as  the “Open Hearth Witch”
A newer film that hasn’t quite made itself known enough to find recognition for its worthy witch inclusion. The witch here was the sole inhabitant of a scary old house called “Open Hearth”. For clarification, the Open Hearth Witch was regarded as a spirit that still haunted the eerie establishment and was often the subject of local urban legend and superstition. The locals often used the location as a reason to dare other kids into throw stones at it, thus awakening the Open Hearth Witch. It’s a film worthy of checking out……..so give it a whirl. 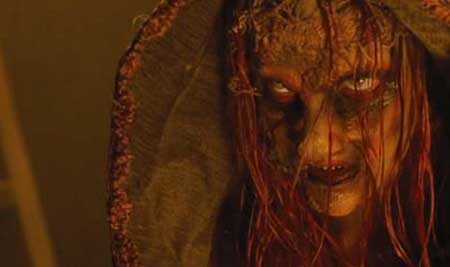 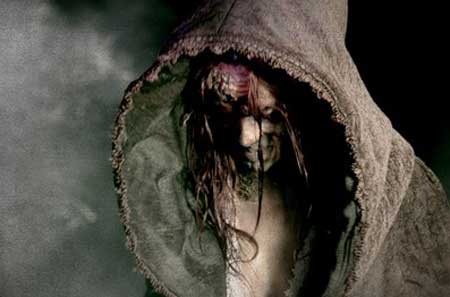 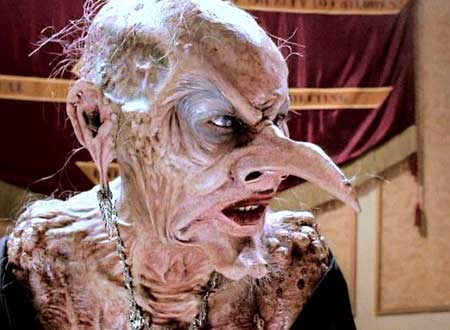 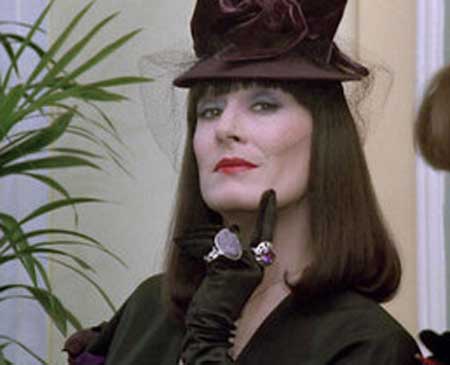 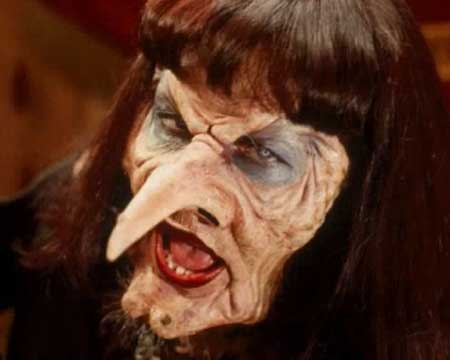 5- Drag Me to Hell (2009) – Lorna Raver as Sylvia Ganush
If you’ve ever seen this film (which if you haven’t should really run out an grab a copy …now!), you will LOVE to hate the actress Lorna Raver who plays the role of gypsy woman Ganush. Ganush is not your typical witch, but rather a disgruntled old woman who places a curse upon Christine Brown (Alison Lohman) after being denied an extension on her mortgage. Ganush invokes the demon “Lamia” who starts to terrorize Christine. Though not before a brutal confrontation that quickly escalates Ganush as one of the craziest old lady gypsy witches in film. The film is a great example of Sam Raimi doing what he loves to do best. Ganush was the perfect film antagonist paving the way for even more diabolical things. She gets my vote and a place on this list. 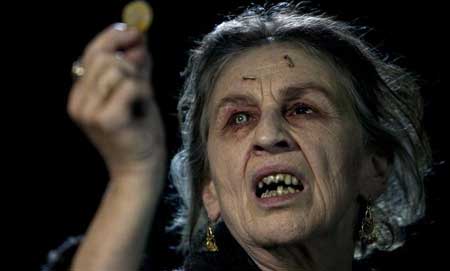 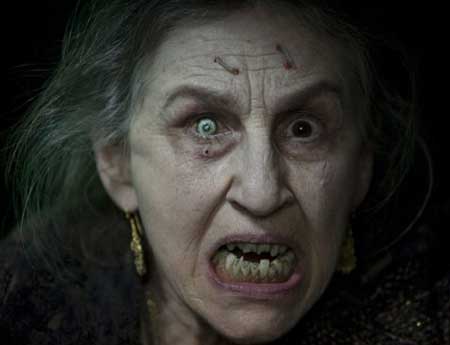 6- Suspiria (1977) – Mater Suspiriorum
Suspiria was a pretty harrowing freak fest of a film. Mater Suspiriorum (The Mother of Sighs) is one of the focal witches in the Mothers trilogy. In further research the film trilogy is cited as “Each film deals with one of the titular “Mothers”, a triumvirate of ancient and evil witches whose powerful magic allows them to manipulate world events on a global scale.”

Dario Argento granted us Mater Suspiriorum in the film Suspiria who leaves a rather lasting impression. 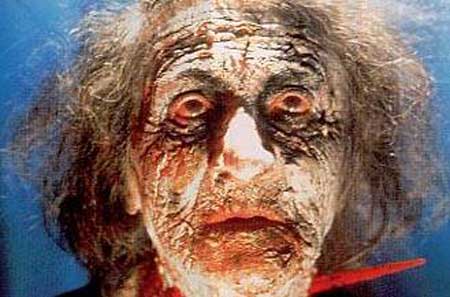 7- The Blair Witch Project (1999) –  Blair Witch?
technically Blair Witch never appears in this film. Per title alone it commands attention as an entry. However I was at odds as whether a non existent witch qualifies. Since the list is called “scariest” witches, I figured the Blair witch had too much fame behind her as a movie title to “not” be on this list. The case in point here is that “Blair Witch” was made to be believable in the presentation of the film, thus creating her presence. That unknowing proved to be “just” as strong as any physical appearance of a witch in other films of the genre. This instance may be a single exception that exists primarily in the minds of its audience members (I know…deep huh?) 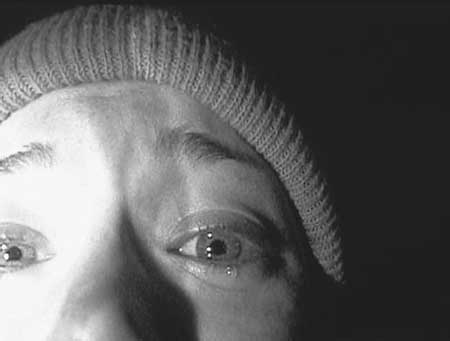 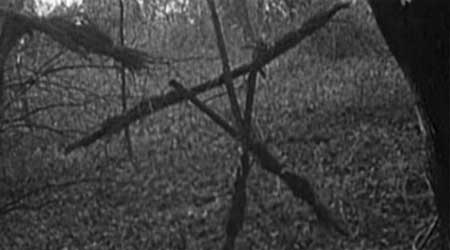 8 –Season of the Witch (2011) – Claire Foy as Anna / The Girl
We come to know Anna as a formidable witch in this film who is being transported under order. Now anyone who has seen the film already knows that Anna is actually a demon in disguise. However bearing the title of “Season of the Witch” and a character portraying an evil witch seems to be qualification enough. She actually becomes her scariest when she sheds her witch appearance and becomes her true image, a demon. An actor playing a demon, playing a witch. Now there’s a concept!

The film also begins on a witch execution segment.The segment is worth noting adding more weight to the entry on this list (or an addendum). In any case, the film is worth checking out whether be it witches or demons. 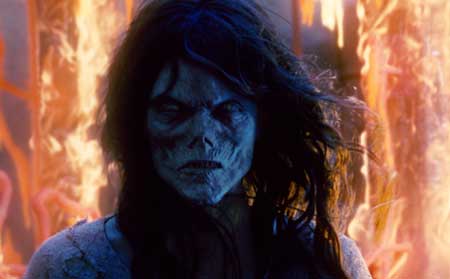 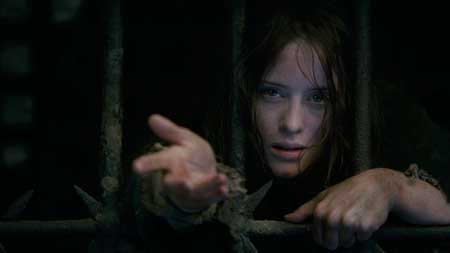 9 – Pumpkinhead (movies)  –  Haggis (the witch)
Haggis, that memorable witch from the Pumpkinhead movie series. Harley seeks out a witch to invoke revenge costing him a terrible price…that being Pumpkinhead. Though let’s not give old pumpkin all the glory. Haggis knows how to summon a demon that manages to return for several films. Not to mention ol Haggis herself. 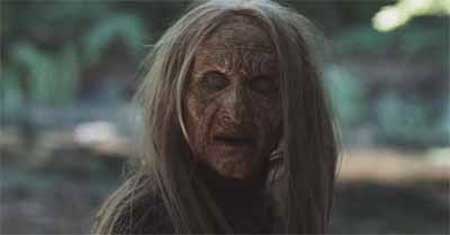 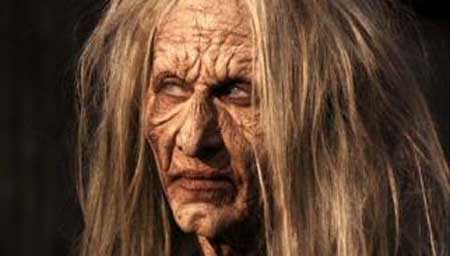 10-  Clash of the Titans (2010) – Stygian Witches
Spawned from Greek mythology these 3 old bats (Enyo, Pemphredo and Deino) are about as blind as one however posessing the power of being able to see into the future. A shared mystical eye is all they need to give persistent Perseus the information he needs to defeat Medusa. The 3 witches got a nice makeover in the more recent remake of “Clash of the Titans”

The Last Witch Hunter (2015) – The Witch Queen
Harrowing from the get-go. This witch from long ago has an agenda, one that warrior even Vin Diesel struggles to beat 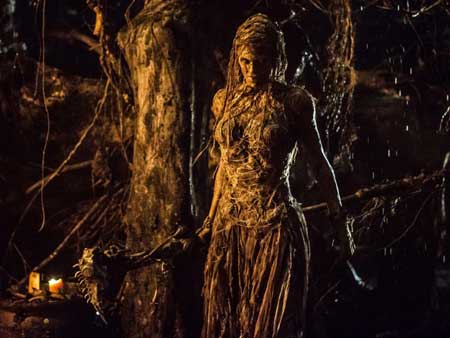 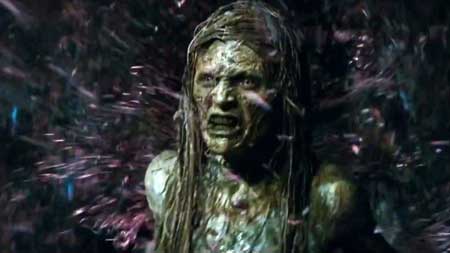 Got a favorite? don’t see it on here? Let us know….we’ll check it out and if it qualifies, we’ll be sure to add 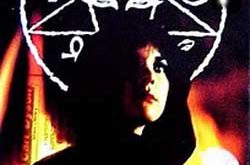