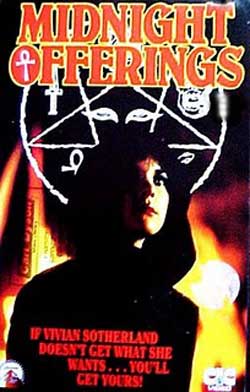 Vivian has magic powers. She doesn’t hesitate to save her boyfriend David from failing in school by murdering teachers. However, David has gotten tired of her and is putting his charm on a new girl in school, Robin. Robin discovers that she also has magic powers, and it comes to a mental struggle between the two women over David.

Before there was “The Craft“, before “The Secret Circle” and before “The Raven” (ok, scratch this last one), you might remember a made for TV movie titled “Midnight Offerings“. The film takes the lead from other like films such as “The Spell (1977)” and ” The Initiation of Sarah (1978)”. Since the movie falls way back into the year 1981, it is probably more likely that you remember it as, “that witch movie that starred Melissa Sue Anderson”. The film offered a pretty decent witch against witch premise that I’m assuming inspired many others over the years. Though trying to locate this one is not as easy with it never arriving on DVD and most likely lost in VHS hell somewhere. In fact as of this review, even wikipedia missed the boat on this one. Though a few kind folks have provided various video links to sections, so its not lost entirely. (Side Note: You can find DVD versions created by bootleggers, most likely pulled from the analog data) 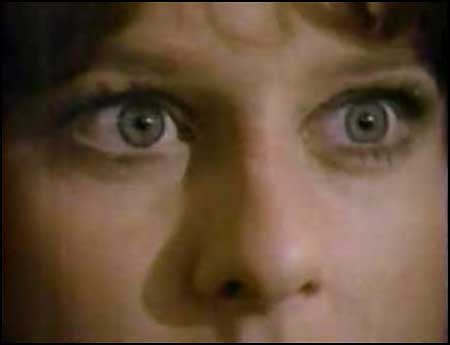 The movie features Melissa Sue Anderson, as the evil teenage witch villianess Vivian Sotherland. Her powers have worked well for her thus far providing revenge or adjustments that need to be made depending on what indulgences she desires. The film opens on  Vivian in front of a Satanic pentagram as she conjures up a spell that sets one of the high school teachers in flames while driving home. That might have come in handy for late homework, however Vivian has other intentions that involve keeping her love interest David Sterling (Patrick Cassidy) from flunking out of school. 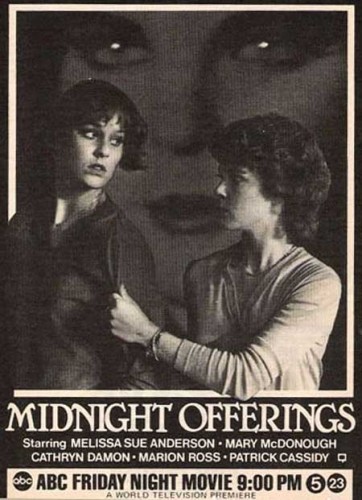 Robin Prentiss (Mary McDonough) is the resident new girl who arrives shortly after. While her intentions are innocent she makes the fatal mistake of befriending David, which doesn’t sit too comfortably with witch Vivian. Hey low and behold…yep Robin is a witch too…go figure. This is not apparent at first but soon becomes the films central area of conflict. Witch against witch..good times. So you know pretty much that a supernatural stand off is evident of which makes up the films 3rd act. This has come to be better known as “The Waltons vs. Little House on the Prairie” (due to previous acting gigs)

As we learn more about the origins, we find that Robin is in fact, the 7th daughter of the 7th daughter. Both girls have inherited witchcraft abilities that span back centuries into their ancestry. Vivian is the stronger of the 2, a hectite witch who has honed her abilities thru practice. Though the one thing, she has forgotten is that bad karma always returns on those who invoke it. Even Vivian’s mother, a one time witch herself seems unable to steer her daughter from the dark path she has taken. 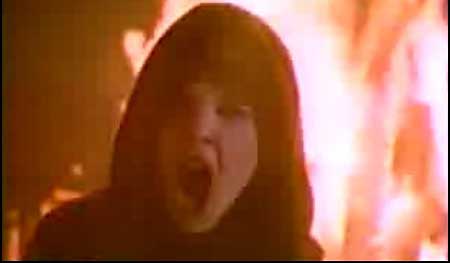 The highlight comes in the form of a wood-shop standoff between good witch / bad witch. It’s good TV fun…the kind that we miss from the Brady Bunch days.

Prior to this film, Melissa Sue Anderson was spending most of her time on “the Little House on The Prairie”, though her mean spirited role seemed to be just the formula needed into landing her a follow up gig starring in “Happy Birthday to Me“. Time shows that her agents seemed to be content keeping her in the TV pool, as she continued making appearances in several show over the years. 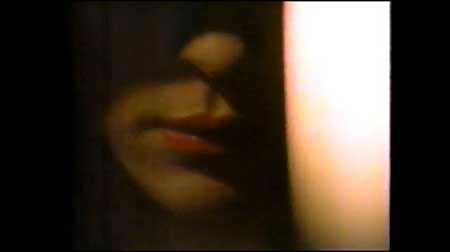 “Midnight Offerings” was first broadcast February 27, 1981, on ABC. The location was shot at Mira Costa High School which is located in Manhattan Beach, California. In the film it was seen as “Ocean Valley High School”

I’ve never really understood entirely why, but I’m seemingly drawn back to this retro 80s film as a mental favorite for me. I think its idea was a bit before its time making for good TV. Good TV was something we all looked forward to back in those days…so a few of these obscure titles really stuck to our psyche.

If you get a chance, check it out. I believe it is still shown occasionally on TV. Most likely in those later after hours runs.