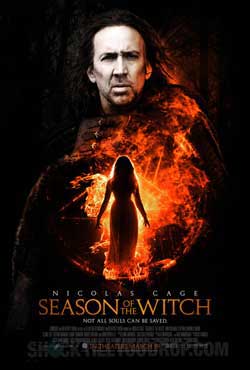 Two knights of the crusade are enlisted to transport a suspected witch to a monastery where she will be put on trial for being suspected of bringing the black plague upon the land, killing thousands. But they end up with a lot more than they can handle from the young girl and end up in a fight for their lives.

“Do you ever get the feeling god has too many enemies”?
“Being his friend isn’t too easy either”.

So says Ron Perlman to Nicholas Cage in the opening moments of “Season Of The Witch”, Nick’s latest attempt to get square with the IRS. You know, The black saint has never really been a fan of Mr. Cage’s work. It seems to me that he is basically playing the same googly eyed character he has since “Leaving Las Vegas” brought him an Oscar way back when. Last year’s “Kick Ass” aside, I haven’t really seen a flick of his that I enjoyed since “The Rock” in 96′ & before that “Moonstruck” and I think that was in 87′ when Cher was just “Old”. At least she had the good sense to take her Oscar & pick her movies carefully afterwards. Not that all her choices have been all that good either but we don’t see Cher on the silver screen every year. Nick usually has a couple of pictures released every year or so. 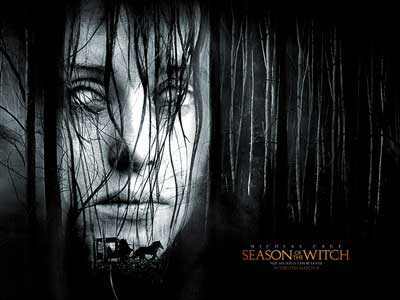 None very good except what I mentioned previously but with the new year comes a bit of a surprise..”Season Of The Witch” isn’t a great movie at all but it ain’t half bad either & he manages to rein in his performance just a bit as a knight of the crusade. Along with his best friend Felson (Ron Perlman), they spend the first ten minutes of the movie slicing & dicing through various armies in various locales for the glory of Jesus Christ. The film opens with them making bets on who’s going to kill more enemies of the church with the loser buying drinks & whores (them Christian soldiers needed their grog & their women between slaughtering thousands). Ultimately, after seeing more than their share of death & Cage’s character (Behmen) accidentally killing a woman, the two decide that maybe the church is being a little extreme in their wanton slaughter of all that won’t agree with the church’s teachings and they just up & quit. They become deserters, and begin to wander the land together without allegiance to any church or anyone. That’s where the real fun starts.

I actually left out the actual opening in which 3 women are put on trial for witchcraft. When I say trial I mean they’re taken to a bridge with nooses around their necks & asked if they’re witches. Two of them beg and plead to be spared, the other one who actually LOOKS like a witch tells the priest interrogating them to go to hell. She goes over the bridge first promptly followed by the second one & the third who is goaded into admitting she is a witch in order to spare her life. She goes over anyway. Then the bodies are lowered into the river still attached to their nooses to drown em’ just to be sure. But the priest insists that an incantation must be invoked over their corpses to insure that whatever evil within them is vanquished forever. He is abandoned by those who were helping him & takes it upon himself to pull the bodies out of the water & recite the incantation over their corpses. Apparently, a couple of the girls were lying…. 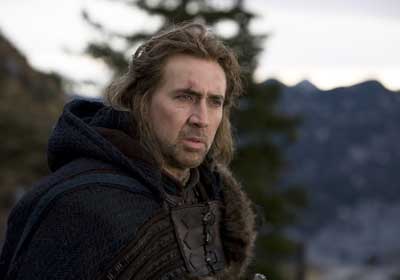 But I left that out because it is a rather gripping opening scene, I actually forgot about it after I was introduced to the two main characters. I am a big fan of Ron Perlman because he has the kind of weather beaten face that lends credence to roles like this. He also carries a certain amount of gravitas about him whatever role he plays. He has a way about him is what I’m trying to say & he’s a far better actor than Nicholas Cage could ever be. But I think Cage realized this during filming & steps up his game just a bit. The two of them have a natural sounding banter between them. The kind of banter that would develop naturally between friends over many years together and that’s a good thing because it made the characters more interesting to me. I did have a problem with some of the dialogue and the way it was delivered. It seems to me that knights of the crusade or people living in the 1500’s would speak in a certain way…with a certain accent in their voices. Maybe it’s just me but Nick & Ron talk to each other as if it’s the year 2011 & they’re a couple of cops on the beat in NY. They sound like medieval versions of “Tango & Cash”, which although inappropriate for the century this tale takes place, made me smile anyway. They’re both obviously having fun with their roles and it shows.

But back to the plot for a second! After about a month of wandering the two of them end up in the town where the witches were executed in the beginning of the movie & although they try to keep incognito so as not to be recognized as deserters, they are eventually found out & are placed under arrest. This is a good scene as well because while Cage gives up fighting back against the knights sent to apprehend them, Perlman’s character just keeps beating people up until he is convinced by his buddy to give it up. Perlman’s rage is evident & he really enjoys fighting. Never mind the fact that he could die in battle, he’s just a c**ky motherf*cker and you gotta prove to him that you’re better. I really loved his f*cking character.

It would’ve been so much less of a movie if another actor had essayed the part. As a matter of fact, Perlman chews up much more scenery than Cage does & in a movie featuring Nicholas Cage that’s saying something. When it is discovered that the two fought in the crusades a deal is offered to them, transport a suspected witch to a monastery where monks are awaiting her arrival to brand her a witch & perform a special ceremony to rid the land of her completely. You see upon her arrival, the land became infected with the plague & it seemed to follow her from territory to territory…killing thousands. The duo agree to escort her if they are cleared of all charges against them & she is given a fair & just trial. The suspected witch who is billed as “The Girl” in the credits but actually tells us her name at the end of the film looks innocent enough, all doe eyes & alabaster skin. But she does seem to have a certain “something” to her. That and she’s pretty frigging strong as well. 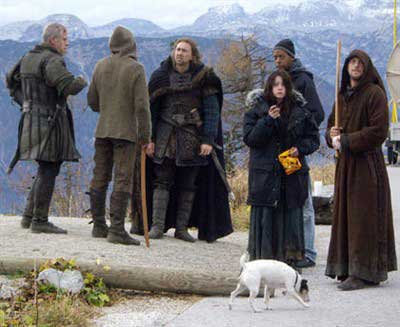 The 3 of them begin their trek along with 3 others, another knight by the name of Eckhart, a priest & a guide. Along the way they pick up one other member for their crew and the adventure begins…

“Season Of The Witch” has gotten some pretty bad reviews and I think that’s partly because of Cage’s reputation and that’s a bit unfair. I don’t like the guy too much either but this movie is nowhere near as bad as you’ve heard. The scenery is appropriately expansive but dour. The special effects (which kick in in the film’s second half) are pretty good although they do have a “been there, done that” quality to them & there is a pretty nifty twist to the story in the film’s final third that was unexpected (by me anyway). Director Domenic Sena directed one of the worst movies I’ve ever seen in my life (2000’s “Gone In Sixty Seconds”) also starring Cage does a much better job here in a genre he hasn’t really tried his hand at before & displays a steady hand with his actors. This is his best work since “Kalifornia” in 93′.

There’s even a short cameo by Christopher Lee (under a lot of make up) as well in this film & he always brings up any movie he’s in a notch or two nowadays. Be mindful, the black saint isn’t saying that “Season Of The Witch” is going to revolutionize the genre or anything like that. All I’m saying is it’s not as bad as most are saying & the story gripped me. This might be because I was the ONLY PERSON in the theater (matinee show, I’m a cheapskate. So sue me). When you have an entire auditorium to yourself it seems to make the movie more intense, more interesting. I think it’s because there aren’t any kids crying, or cell phones lighting up or people talking on them to distract me. But this time I think I would have enjoyed the movie just the same if the joint was jumping. It’s really a pretty good movie and although I’m still not a fan of Nicholas Cage, I liked him in this movie & I have think there might be hope for him yet. The Black Saint is giving “Season Of The Witch” 3 shrouds out of 5, which is a hell of a lot more than I thought I was gonna give it. I enjoyed it and I think that you might too. If you can catch it at a matinee showing…give it a shot. You might be surprised. I sure was!