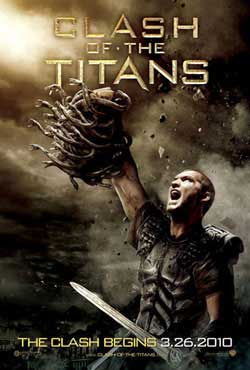 “The Clash of the Titans” is set in the Greek city of Argos where a war is about to explode between man and the gods. Perseus (Sam Worthington) raised as a fisherman, but is actually a demi-god. Perseus is the son of Zeus (Liam Neeson) who is about to take on the gods after the death of his family. Zeus’ brother Hades (Ralph Fiennes) was the one who kill his family, and Perseus wants to kill him. However, it is Perseus’s destiny to rescue the city of Argos from the ruthless rage of Hades and his Kraken monster. With nothing to lose, Perseus leads a band of soldiers on a quest to defeat the Kraken. In doing this, Perseus will prevent Hades from overthrowing Zeus and in turn destroying mankind.

It’s always a pleasure when a film like “Clash of the Titans” comes around to theatres. Mainly because it’s grade A from start to finish. Though even as a remake on the foot heels of the original 1981 film by the same name, it doesn’t take away the fact that the original was a classic from that era. What it does do is take most of the story points and characters into a new realm that is more in tune with technology today. The 1981 film which utilized primarily stop motion techniques to bring its characters to life is indeed an art form of the past.

With this new envisioned version, we get the full impact of the powerful Olympian gods presented in a fantastical way. What is most surprising is the use of the god Hades played by Ralph Fiennes which truly is a site to behold. Chaos, dark clouds and particle system 3D effects added makes this version of Hades menacing and brooding in a complete new light. This is an added story bonus from the original which has been changed to have more interaction with the gods and humans. Liam Neeson plays the role of Zeus while Sam Worthington plays the key role of the demi god Perseus.

As it’s explained, man has long worshipped the Olympian gods which also attributes to their strength. In fact it was the gods who created man. But man has gotten restless to the point where their belief in the gods is lessened and their obedience to them has strayed. As they topple the gigantic Greek statue of Zeus over, the wrath of the heavens is felt below. Sending out harpies and dire consequences its Hades who arrives to slay the disobedient warriors. Though in the wake, Perseus’s earth parents are killed as a result creating a conflict for Perseus with the gods. It’s not until later that he discovers his true nature as being born as the son of Zeus from a revenge encounter with an earth women. But when Zeus grants Hades the permission to reign his wrath on the earthlings and city of Argos by way of a challenge, its Perseus who steps up to the plate to seek out a way to defeat this legendary beast, “the Kraken”.

The challenge? – Defeat the Kraken, or sacrifice the princess to save the city. Lo played by Gemma Arterton is an ageless beauty who has watched Perseus grow from birth. Her curse of immortality has brought her to the present in which she has grown quite fond of the grown up Perseus. The king’s army heads out to consult the Stygian Witches on a solution for defeating the Kraken. This advice leads the men on a perilous mission that heads them straight in Hades itself to seek out the beast Medusa. Along the way they battle giant scorpions, a Hades aid Acrisius, a group of stone like creatures called the Djinn, and other creatures of evil.

While the film is pretty much a non stop ride thru mythological beast and legends, it was surprising that the creature Cerebus was left out, though most audiences won’t notice the difference. Medusa is impressive but still slightly a bit too CGI for some tastes. My preference this year was the Uma Thurman version in Percy Jackson and the Lightning Thief. The appearance of the Kraken at the end of the film is all its expected to be and more. This time more menacing, with plenty of depth to it’s form making it a awesome version of the beast. Much more impressive than the original jittery stop motion version from 1981.

Clash of the Titans as story is a loose version of the original myth that is designed to present maximum impact to its viewing audiences. The tale itself has been retold in different versions, though even with it being a re-vision it still is a fantastic film and a great 100 minutes of entertainment.

The film is directed by Louis Leterrier which in my mind is really the first true best film of 2010. Other successes such as Alice in Wonderland definitely did there box office numbers but failed on some parts to globally win over critics. On my viewing, I chose to forgo the 3D version and just catch it in 2D. My reasons being that really the thrill of 3D has faded as well as the Hollywood ploy to gain more money out of film-goers. Clash of the Titans 2010 is a film not to be missed. Truly exciting, visually captivating and even has a “300” flair to it at times…check it out!