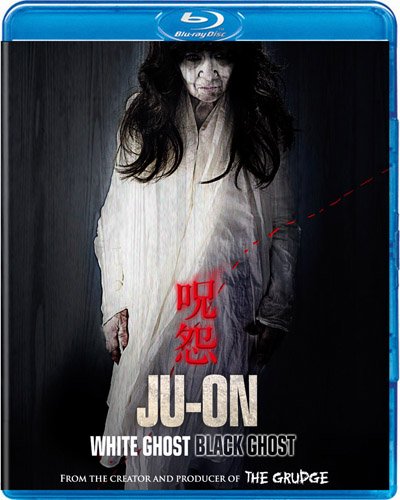 JU-ON: WHITE GHOST tells the story of senior high school student Arkane whose strong ESP power induces him into seeing Mirai, the tragic ghost of an old school friend. JU-ON: BLACK GHOST tells the chilling story of a young woman called Fukie who discovers that she’s carrying an unborn ‘grudge’, which vengefully curses all those around her

Ju-On: White Ghost / Black Ghost is a combined release under Well Go USA that brings together the 2 segments “Ju-on: White Ghost” and “Ju-on: Black Ghost” under one package. The films base their foundation on the mythology of the Ju-on movies which primarily are set upon the basis of a rogue revengeful spirit. At start we are told that a Ju-on curse arrives when someone dies in a powerful rage. This death results in a “stain” which if touched, begins a new curse.

Ju-On: White Ghost / Black Ghost (JWGBG for short) JWGBG is a smart horror thriller that tells its story in almost anthology-like segments (called anachronistic order). These segments are all a part of the main story working in reverse as a narrative and then separated by chapters (slide-titled with characters names). 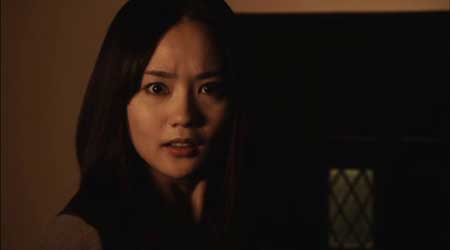 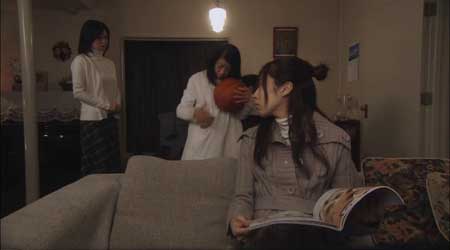 The story which is written by director Ryûta Miyake and director Mari Asato is laid out in pieces that require the viewer to sit thru all of them to get the entire story (much like a TV series might). The segments are filled with plenty of haunts and creepy spirits keeping the whole shebang within the tradition of other Ju-on releases. Really, combining the 2 under 1 re-release is almost “essential” to a solid viewing experience for this united release.

A Christmas delivery boy is startled when he arrives at a house that appears to be haunted by the murdered spirits of the family that resided there previously. A ghostly residual repeats her last comments before being brutally murdered. A small girl  is also found beheaded on her bed.

These situations are all a part of “residual haunts” that still reside from the previous tragedy. The tragedy is told as a family massacre that occurred 7years ago in the town of Nishiogi. A father who is possessed by an evil sprit murders his wife and daughter before taking his own life per way of hanging. His daughter’s head (which is hand-carried out to the suicide location) is placed in a bag lying next to a tape recorder that records his dying confession. This tape recording plays a small part in the story as a re-occurring item that doesn’t seem to want to ever leave. 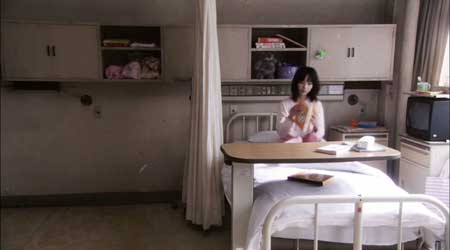 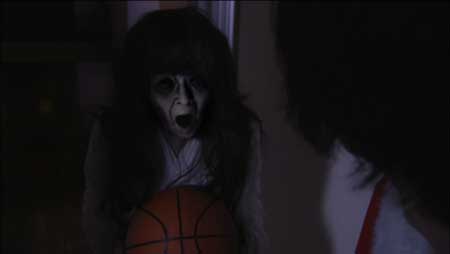 Though after spending time with the entire movie and its sister film “Black Ghost”, I found that all stems from a girl named Fukie who is born with a rare condition called “cystoma”. Cystoma is what they call it when a twin is present inside the body feeding off the host (essentially born “into” the body rather than arriving in typical fashion). The cystoma becomes a jealous unborn spirit that sabotages the host and releases the initial Ju-on of this story. When Fukie becomes ill, she is put under the care of a local hospital. The mother invites a woman named Mariko who as a specialist is taxed with having to kill the unwanted spirit within Fukie. Though this backfires and set the who mess into play.

JWGBG takes advantage of its segmented approach by introducing new stories and historical events all tied together to the initial Ju-on event. The chapters are named accordingly under character names such as “Akane”, “Mirai”, “Isobe”, and “Chiho”. In our journey we get a hefty helping of murder, haunting, terror, incest, revenge, betrayal, possession and of course…..supernatural.

The supernatural is a given as the dead and the living are intertwined as you might expect from any Asian ghost movie. The twists and cleverness here is a firm storyline that answers questions as it moves forward. FX are mostly minimal but still effective enough for providing a good haunting kind of experience. 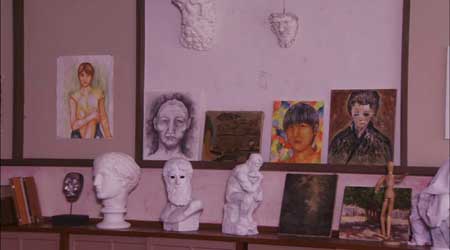 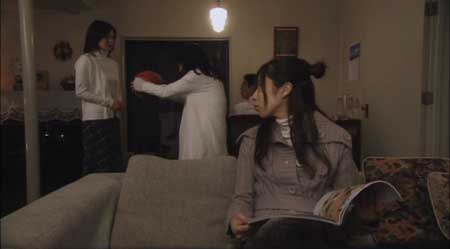 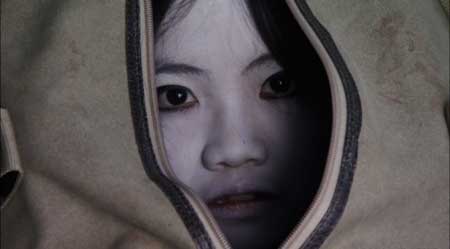 White ghost refers to the ghost of an old lady, with black referring to the Ju-on rouge Fukie. In research “Ju-On: White Ghost / Black Ghost” was created “in honor of the tenth anniversary of the Ju-on series” It does honor its original with a brief cameo appearance by ghost “Toshio Saeki”, though it is an original story of its own accord giving viewers more of what they expect to see.

In summary, I enjoyed the film more for its writing than for actual scares. It doesn’t get as crazy as those “Tomio” films but still manages to feel like a part of the whole Ju-on franchise. Give it whirl at least once. It’s worth checking out and provides a well thought out story to experience. 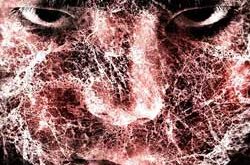