If the worst day of your life consisted of accidentally killing your girlfriend with an axe, chain-sawing your own arm off, and watching in horror as your closest friends were devoured by a zombified Nazi battalion, you’d have to assume that things couldn’t get much worse. In Martin’s case, that was only the beginning.

At the end of Dead Snow, Director Tommy Wirkola left Martin (Co-writer Vegar Hoel) in a pretty awful situation. Despite the fact that he saw his friends killed by a murderous group of Nazi zombies, accidentally killed his girlfriend, lost his right arm & his penis (Something that’s ignored in this sequel – it must’ve grown back) – he got away from the Nazi horde. But he discovers a single gold coin left over from the gold that the Nazi’s were after in the first place, and the Nazi’s want every bit of their stolen gold back. As Dead Snow 2 begins, we find Martin in his car, fighting off more Nazi’s who are after that last bit of gold. He manages to drive away, but complete exhaustion leads to him falling asleep behind the wheel and he drives off of the road into a snowy ditch. 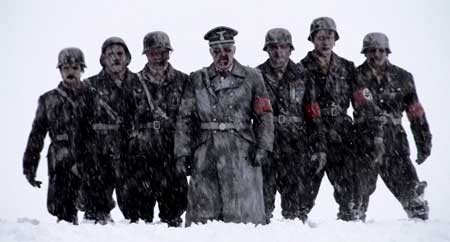 He awakens in a hospital bed, but discovers two problems: He’s being accused of murdering all his friends and the right arm he lost in the last film has been sewed back on, but with Nazi commandant Herzog’s (Orjan Gamst) arm instead (He lost it in the previous struggle). And Herzog’s arm has a murderous mind of its own, so Martin has to tame it to do his bidding. In the meanwhile, Herzog isn’t satisfied with reclaiming all of the stolen gold he desired so badly. He has a unnamed job from Hitler to accomplish that he never got to complete while he was alive, and he fully intends to get those orders taken care of. But first he needs to procure a new army, since a lot of his soldiers were killed in the first film. In the interim, Martin is on the run from the inept Norwegian police and learning about the powers his new right arm presents to him. He manages to get in touch with a trio of Americans who call themselves “The Zombie Squad”, and claim that they are prepared to handle any zombie apocalypse that happens to come along. But in actuality, they’re just 3 geeks who find themselves in way over their heads – at least at first.

Wirkola has obviously studied the films of Sam Raimi. Dead Snow 2 differs from it’s predecessor the way Army Of Darkness (1992) differs from The Evil Dead (1982), in that it’s nearly all played for laughs. Dead Snow had lots of humor to it as well, but it began as a straight out horror film that slowly segued into its humorous bits. Dead Snow 2 makes no bones about what it wants to be, it’s a horror comedy with tons of gore & grue, but no scares whatsoever. This doesn’t make it a failure, far from it, it’s one of the most entertaining films I’ve seen all year by far – maybe the most entertaining. But I would’ve liked a scare or two tossed into the mix every so often.

The Zombie Squad, Daniel (Martin Starr), Monica (Jocelyn DeBoer) & Blake (Ingrid Haas), are a motley crew of nerds that initially look like they have no business killing any kind of zombie, let alone Nazi zombies. But they’re actually quite competent at their chosen profession, and plenty funny too (although the whole Star Wars vs. Star Trek argument Monica & Blake continually have gets stale really quick). As Martin, Hoel adopts a characterization that’s a near duplicate of Bruce Campbell’s Ash, but Martin has a meaner streak than Ash did. Martin also adds a couple of sidekicks to his cause (In addition to the Zombie Squad). There’s Glenn Kenneth (Co-writer Stig Frode Henriksen) & Sidekick Zombie (Kristoffer Joner), and both of them have their moments of hilarity here as well, Glenn is a closeted gay war museum employee and Sidekick (That’s his characters name BTW) is something of a loyal puppy dog that follows his masters to the bitter end, regardless of the physical abuse he gets – and he gets a lot of physical abuse here.

As Herzog, Gamst emanates a steely, nefarious veneer that perfectly fits the character, but if you watch closely, there are quick moments where he acknowledges the lunacy of what’s going on around him that lends his character a bit of humor. These moments generally occur after some display of extreme violence, and if nothing else, Dead Snow 2 is extremely violent. It’s pretty much the goriest film I’ve seen all year, Wirkola seems to revel in throwing guts at the screen and no one is safe here – babies, kids, the elderly, the handicapped…everybody is a target for the rampaging Nazi’s and while it’s pretty hysterical, it’s also a bit too much, almost exhausting. In fact, the last 40 minutes of Dead Snow 2 is literally one extended battle between Martin (& the horde of Russian zombies he’s resurrected to fight the Nazi’s – it’s a long story) & Herzog’s evil Nazi horde. And this battle is so frenetic, bloody & brutal that I felt like I had gone 10 rounds with Mike Tyson when it was all over. It sounds awesome (& it pretty much is), but the first 60 minutes of Dead Snow 2 is pretty frantic too, so all of this got to be a bit too much for me. And what’s with Wirkola’s seeming fascination with human intestines? There are at least four scenes where intestines are the focus (Nazi’s using some to siphon gas from a car to their tank is a highlight), and Wirkola returns to them repeatedly. I found that odd & unnecessary after awhile. 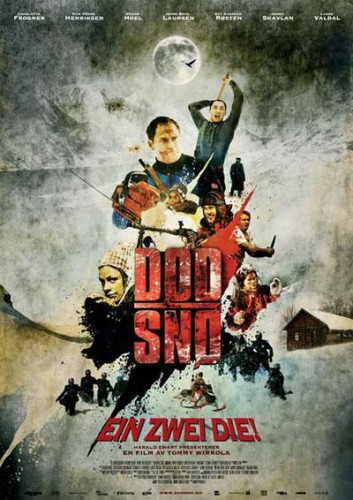 But I’m not gonna sit here and tell you that I didn’t love the heck out of this movie, Dead Snow 2 is a kinetic, frenetic, roller coaster ride of a movie that left me breathless – and it’ll have the same effect on you. It literally puts the petal to the metal seconds after it begins, and it never lets up for more than a few seconds at a time before it revs itself back up again. It drenches the screen in laughs and guts in equal portions and the gorgeous Norwegian vistas make the whole thing look like a vintage oil painting at times. I just wish that it took a little more time in letting the audience get to know its characters a bit. Additionally, since it takes off directly from where the last film ended, those of you who haven’t seen Dead Snow might need to watch it. But Martin does offer a quick summation of the previous film in the beginning here, so that isn’t a deal breaker. 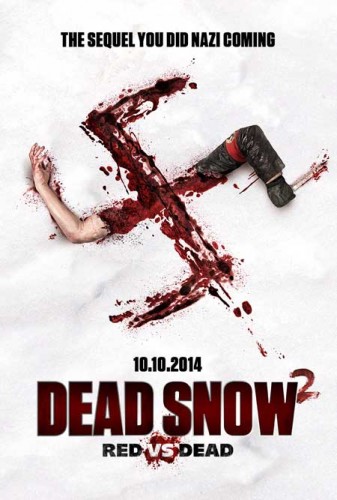 Dead Snow 2: Red vs. Dead is easily one of the best horror films I’ve seen this year, but that’s more because of its way over the top gore and laugh out loud humor, and less about the actual horror. It isn’t the least bit scary, but I’m not too sure if it wants to be. What it wants to be in entertaining, and it succeeds most wholeheartedly in that regard. When held up against Shawn Of The Dead (2004) (Which I consider to be the gold standard for horror comedies), it falls short. But that’s because SOTD had some genuine emotion and humanity to go along with the gore and laughs, and Dead Snow 2 doesn’t (The end scene where Martin resurrects his dead girlfriend and has sex with her to the tune of Total Eclipse Of The Heart doesn’t count as emotional to me – funny, but not emotional). But Dead Snow 2 does exactly what it sets out to do and does so more successfully than any film I’ve seen this year. It’s one hell of a bloody good time.