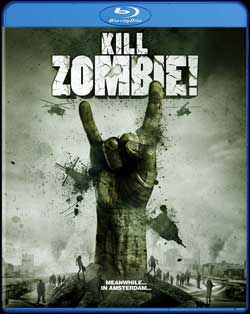 The bizarre story takes place in Amsterdam-West, where a virus turns people into bloodthirsty zombies. Although much blood is flowing and many limbs chopped off, there is a lot to laugh at in this bizarre horror comedy.

Simon Pegg and Edgar Wright have a lot to answer for. Since Shaun Of The Dead stumbled and staggered on to cinema screens in 2004 there has been no shortage of attempts at emulating the success of this rom-zom-com, usually with little success. Latin semi-namesake Juan Of The Dead drew on  some of the same blood and low budget British film Stalled brought some originality to the flagging sub-genre last year but there have been few that have lived up to the supremely high standard set by Pegg and Wright’s future classic.

The latest contender though is the somewhat bizarre Kill Zombie! or Zombibi to give it its original title. The story is set in Amsterdam West where the European Space Station crashes into an office building bringing with it a strange virus that turns anyone unlucky enough to be infected into a bloodthirsty zombie. With help from his reluctant brother Mo (Mimoun Ouled Radi) and Kim (Gigi Ravelli) a beautiful and deadly cop, Aziz (Yahya Gaier) battles to save his girlfriend (at least that’s how he sees it) from the aforementioned office building while avoiding the growing violent hordes.

If you had never seen or heard of Shaun Of The Dead, maybe if the film had never even been made, Kill Zombie! would be a relatively enjoyable attempt at the difficult task of combining horror and comedy. True, there are moments when the humour falls somewhat flat and the blood and gore is missing the mark for the most part, but there is genuine heart behind the film and like a plucky underdog you find yourself wishing it well. The problem though is that Shaun does exist and casts a huge, zombie shaped shadow over everything. Perhaps this wouldn’t be too bad if only the filmmakers had not only referenced their film’s illustrious predecessor but actually seem to lift specific scenes at times with such obvious intent that it is amazing there have not been plagiarism suits.

From a performance point of view Kill Zombie! suffers from the same, equally contagious, affliction that affects many similarly budgeted films. In the absence of real humour and cleverly witty dialogue many of the characters resort to clichéd interactions or simply shouting at each other in the hope of creating tension or emphasizing what is supposed to be funny. In reality there are so much curious plot contrivance and strange decision making that you find yourself drifting out of the action from time to time and becoming increasingly unsympathetic to the “heroes” plight. For films such as this to work the story and action need to be so engaging to make the audience forget about all the peripheral plot holes and vagaries and just enjoy the on screen events but sadly that isn’t the case here. 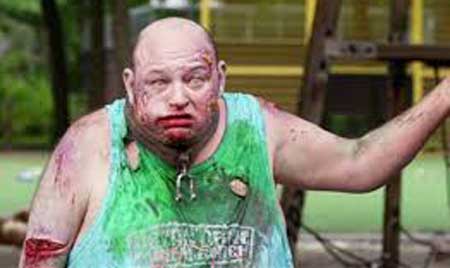 There are always going to be zombie films, and there will always be attempts at blending humour into the mix. Because of the mainstream nature of the subject matter these days though an audience’s knowledge of the genre has been greatly increased, whether they are horror fans or not. With the genre now more popular than ever on both television and in literature any new entries into the canon must do something different and challenge any viewer’s preconceptions. Unfortunately Kill Zombie! just doesn’t achieve this. You will want to enjoy it more that you actually do and you will want to find something of note within its well trodden story but sadly you won’t. Kill Zombie! is just one of those films that leave nothing with you when it’s over and is as forgettable as it is unoriginal.