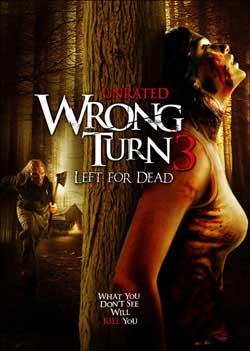 A group of people find themselves trapped in the backwoods of West Virginia, fighting for their lives against a group of vicious and horribly disfigured inbred cannibals.

The freaks are back for another round of kill the intruders. Wrong Turn 3 takes a bit of the original and combines it with 2 stories in 1 kind of premise. The opener sets the stage for a nice round of brutality which is carried out pretty quickly. Our setting of some college kids river rafting and then getting assaulted by mongoloid strangers moves swiftly and to the point. No waiting around for a kill by numbers every 15 minutes tension ride. They are gone as quickly as they can say “how many lines do I have in this film?”. I have to say I appreciate the get it over and do it right horror approach that let’s us know that “this” is not the real story here.

What is the real story is a collection of some nasty and high profile convicts who are on their way to getting transported and relocated to another facility. Now the local enforcements aren’t stupid and expect an ambush mid travel as they prepare for the worst. Though a back route road and some change in timing seems to do the trick in defeating any preliminary plans the convicts arranged in advance. What they didn’t anticipate was the weird cannibal inbreds that lurk within these forests. The role of the antagonist is constantly switching as the captives are at the mercy of gun wielding convicts and hillbilly forest mutants. The whole she-bang begins with the mutants who lure the transport bus off road from which overturns. The rest of the journey is left to on foot travels in the middle of nowhere.

Officer Nate(Tom Frederic) has some history with these parts and knows enough to direct them in the right direction. Our neighborhood mutants reside in these parts and actually hunt humans to feed off of or jar up for later. Though even for mutants they are smart enough to drive vehicles, plot captures and sneak up on travelers wielding spears, axes and sharpened forest implements.

FX work is done professionally and effective in the same way you’d expect from “My Bloody Valentine” and other modern horror releases. Director Declan O’Brien provides us with a nice rhythm that doesn’t tire. Mainly because you never know where the real threats will come from. I tend to be leery sometimes of sequels and 3rd releases..but in this case it worked out for the better. Main additional acting talent includes: Janet Montgomery as Alex, Tamer Hassan as Chavez, Gil Kolirin as Floyd Weathers and Tom McKay as Brandon. For thrill seekers, there is a fair amount of gore but mostly with chopped body parts and dismembering scenes. Which by modern standards is pretty standard.

Somewhere along the journey I got that similar feeling as the first time watching”Freddy vs. Jason”. In this instance it’s cannibals versus inmates. Neither far from completely evil and tough as nails at that. Alot of this film is built and building on tension within the group, within the forest, within the law to prisoner relationship and a nice helping of greed thrown in. As the cannibals inflict their mechanized forests traps on these folks, it only adds to the conflict drama. Not to mention being lost and finding a Brink’s truck filled with millions of dollars. I think if you are a fan of the series this one will fit nicely as it offers something different than a simple college kids lost in the woods type film. The kills when they happen are merciless and painful.

My favorite this round though has to go to the barbwire net scene that is pulled by the pickup truck……not only watching the inmate suffer as he’s hung from a barbwire net contraption but to further the pain by dragging him face down in the road way. Now that some psychological mind ammo there.

I enjoyed this one probably as much as the original. I’ve yet to see part 2 so I couldn’t tell you if there is a story carryover or not. Though all the right elements are here for a nice night of horror thrills…so have at it. Category to put this one under? Crazy Cannibal Madness!!!!