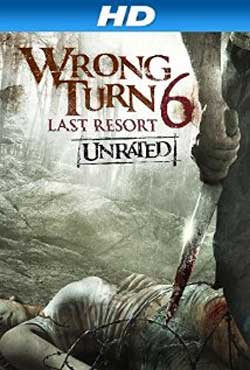 A sudden and mysterious inheritance brings Danny and his friends to Hobb Springs, a forgotten resort deep in the West Virginia hills. Hobb Springs is being looked after under the watchful care of Jackson and Sally

Chronically depressed orphan, Danny (Anthony Lott), suddenly receives information regarding his family. Not only has his lineage been uncovered, but it appears he has inherited a large hotel spa resort in the sticks, and bundles a bunch of friends to head out to the property for a weekend. Upon arriving, he meets the caretakers to the property, the sultry Sally (Sadie Katz) and her brother, Jackson, (Chris Jarvis). He is instantly taken by the place, though his girlfriend, Toni, is a bit more sceptical.

Once they’ve all checked in, it doesn’t take long for suspicions to arise from the gang, and soon the familiar hillbilly freaks that we know well from the series show their ugly faces and begin impaling and maiming. The inbred family have plans for Danny – he’s needed to continue the bloodline, and the rest of his friends are disposable. Is Danny too taken in by the potential of discovering his past, or will he finally snap out of it and help save his loved ones? 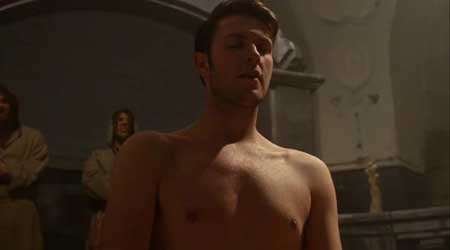 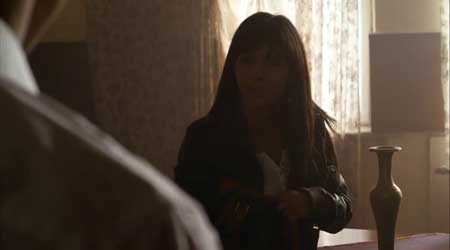 It’s hard to believe that the Wrong Turn series has reached part 6, but then again, the series has been somewhat entertaining to this point, so why bother stopping? The first entry, directed by Rob Schmidt, was a solid little horror film, with some excellent make up from Stan Winston. It took a few years before Wrong Turn 2 popped up, with Joe Lynch putting his nasty, gory and fun stamp all over it. Since then, we’ve had another direct sequel, in the guise of Left for Dead, only to be followed by two prequels, Bloody Beginnings and Blood Lines. So how does Last Resort fit in? Sadly, not very well, plot wise.

The three hillbilly monsters, Sawtooth, Three Finger and One Eye, take a bit of a back seat in this 6th instalment, and that isn’t necessarily a good thing. Instead, we focus more on Danny’s family past, namely, the strange, cultish blood rites and old beliefs in carrying on the bloodline. You see, beneath the floor of the hotel is an alter in which Danny is supposed to impregnate Sally on. This leads to us seeing the trio of mutants putting on hooded robes and standing around during the ritual, which seems all out of place for the series. Sure, it’s something different, but it just doesn’t feel quite right. 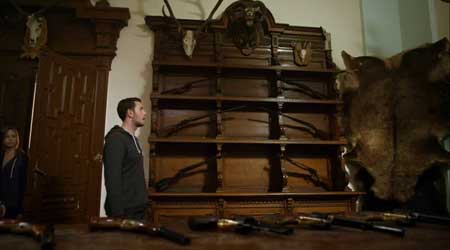 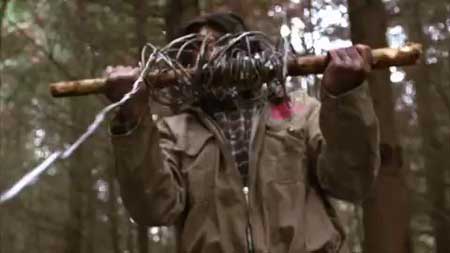 Being that Danny and his friends are the main focus, it leads to a film that starts to sag in the middle, and we get bogged down in people sneaking around the resort, having arguments, getting high, and a strange subplot involving GoPro cameras that goes absolutely nowhere. Danny himself is particularly uninteresting as a character; we just never care enough about his depression or his revival from it, and this shift in focus to him leaves the film somewhat lacking in personality.

Saying that, most of the viewers renting or buying this probably aren’t too fussed over these new takes on the Wrong Turn saga, and at least the film delivers some entertaining goods for the fans. 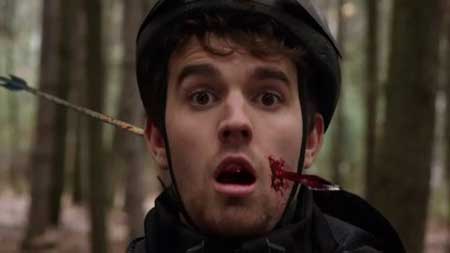 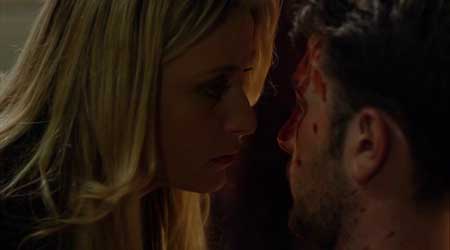 The sex and nudity seems to have been upped from previous entries, with all females disrobing at some point (you have only to wait about 50 seconds into the film to see your first ass-and-boob combo here), and one scene in particular, involving a naked girl, stirrups and legs being bent the wrong way is worth keeping an eye out for. The gore and deaths are strong enough, with the best being the opening murder and the one mentioned above. Some of the kills do feel a bit flat, though, involving stabs and arrows, and the makeup on the killers seems to have gotten worse, now resembling cheap, motionless masks. Stan Winston wouldn’t be happy with that.

Chances are if you are picking up Wrong Turn 6, these complaints won’t be enough to put you off. It has lashings of nudity and bloodshed, and the ending is nicely poor taste, too. It’s just as pity then that the rest of the film feels a tad dull, and that’s something a Wrong turn film should never be.