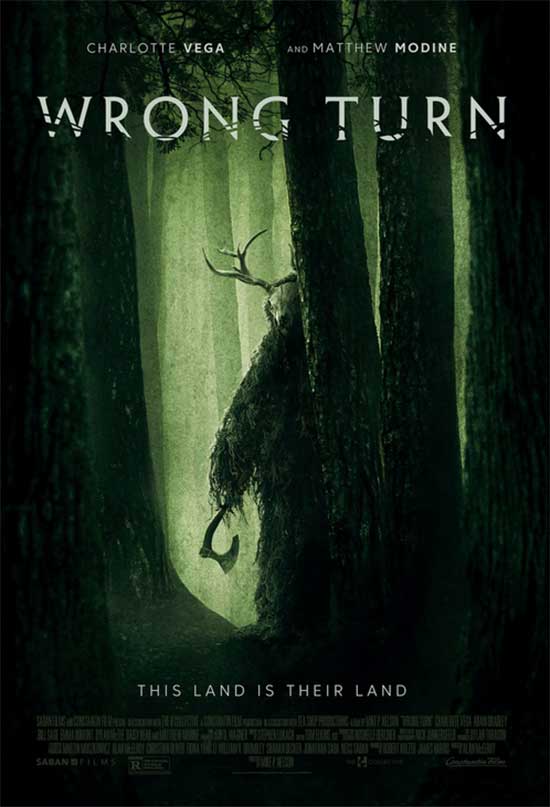 Backwoods terror and never-jangling suspense meet when Jen (Charlotte Vega) and a group of friends set out to hike the Appalachian Trail. Despite warnings to stick to the trail, the hikers stray off course—and cross into land inhabited by The Foundation, a hidden community of mountain dwellers who use deadly means to protect their way of life. Suddenly under siege, Jen and her friends seem headed to the point of no return— unless Jen’s father (Golden Globe® nominee Matthew Modine) can reach them in time.

Director Mike P. Nelson (The Domestics) takes on Wrong Turn (2021). Alan McElroy wrote the original Wrong Turn (2003) and he wrote this one too.  I was excited about this film ever since I found out that Mike P. Nelson was going to direct it. The film is beautifully shot and terrifying. Wrong Turn (2021) is reimagined and takes place in a “contemporary setting.” If you want to watch the original Wrong Turn (2003) film, go ahead. It’s still a classic fun movie. Wrong Turn (2021) is refreshing, it’s scary. It’s not just Three Finger (Julian Richings is incredible though.) and Saw-Tooth running amok in the woods. It’s smart. This group of people have managed to build shelter and survive in the mountains of the Appalachian Trail.

The “Foundation” is a group dedicated to what they have built without society interfering.  The characters, to outsiders are menacing and brutal but they don’t agree that they are barbaric. Real life society itself can be barbaric.

Wrong Turn (2021), Matthew Modine’s (Full Metal Jacket, 47 Meters Down) character Scott is searching for his daughter Jen. She went on a hiking adventure with her friends. They are hiking the Appalachian Trail. Scott arrives in the small town and the people are not super excited for outsiders. Scott isn’t prepared to heed a warning. Scott is determined to find his daughter Jen (Charlotte Vega). 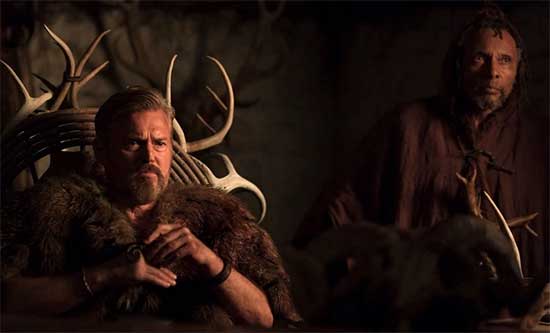 They flash back to six weeks earlier and a “Welcome to Virginia” sign. The group of friends that Jen is hiking with are: Adam (Dylan McTee), Luis (Adrian Favela), Gary (Vardaan Arora), Milla (Emma Dumont), and her boyfriend Darius (Adain Bradley.) They are all having fun, taking selfies and photos. Little do they know the wild shit waiting for them in the woods. They are cruising along and BOOM, flat tire. I appreciate that Jen is changing the tire. The “girls” aren’t weak or flighty and I don’t mean that in a bad way. I get it. It was just refreshing to see the different strengths that each character has.

I digress, back to the film. Jen’s group is having fun at the local bar. They are greeted by locals in the most unwelcoming way. This group is led by Nate, portrayed by the amazingly talented Tim DeZarn who has been in his fair share of horror films including The Cabin in the Woods and The Texas Chainsaw Massacre: The Beginning (2003). He’s been in a zillion films and television shows. He’s a brilliant actor. 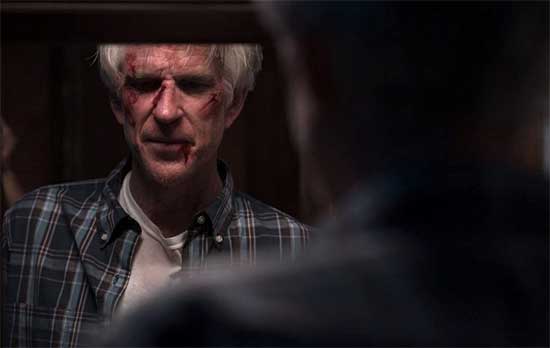 Nate warns them about the trail and the woods.  Real life is obviously scary enough. This past year and the current events of 2021 have already proved that point. I think most people wanted to leave the griminess of 2020 behind yet it slithered through the cracks and made its way into 2021.  The group makes their way back to the inn and they meet Hobbs (Chaney Morrow) for a second before heading back to the inn. (Don’t worry they explain it later on.)

Jen’s boyfriend Darius wants to see a landmark and they were told not to go off the trail. “The land can be unforgiving”- a warning courtesy of the nice lady at the inn, Aileen (Amy Warner). It barely started and I have goosebumps. I’ve been in some strange situations and being stuck or trapped somewhere unforgiving isn’t the best thing that can happen to you. As soon as they venture off the trail, you realize the woods have turned into a brutal version of Raiders of the Lost Ark and there is no Indy to save anyone.

It gets wild right away. The special effects crew and the folks who designed the traps. They deserve a lot of praise. After all hell breaks loose, they camp out for the night. This is definitely a movie you want to watch with friends/family so you all can yell together. NO! Don’t stay the night! They never listen anyway; it’s already written and filmed but, it’s still fun. (Social distancing of course and via zoom or Face time. Stay safe.) 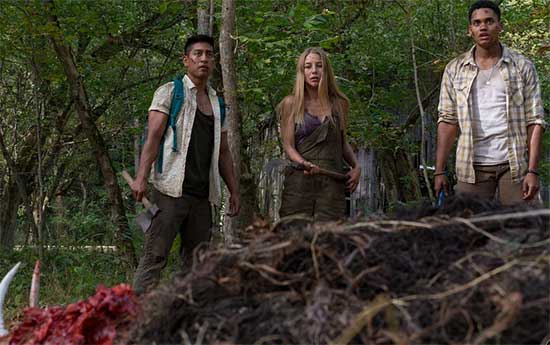 It’s the next morning. The group realizes some crazy stuff. They also find the pledge of the Foundation. This group that inhabits the mountains. The costumes and the way the Foundation group just blends right into land is insane. They blend in with the trees, the ground, the rocks, and everything in between. Jen’s group tries to run. They come across trap after trap. (Did they hire JIGSAW? Don’t worry, I’ll see myself out.)

This may be a reimagined version of Wrong Turn but it’s fresh and captures something new. People have borrowed and paid homage to films forever. It’s art, no matter what.

The Foundation group is primal. They built everything and most likely know the woods inside out. (I will say this. If you are hiking in the woods or anywhere, be aware of surroundings. Just a safety tip.)

The Foundation members in the full costumes. It’s insane, in such a good way. The trees and nature are just out here walking around. Jen’s group is in big trouble. They get to meet the Foundation. They get to see what these people have built. There is an entire village. It was like watching Captain Willard (Martin Sheen) arrive on the island to find Colonel Kurtz (Marlon Brando) in Apocalypse Now. 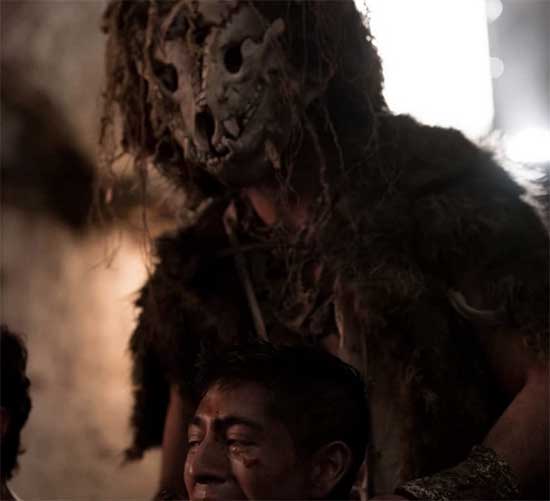 They are taken to meet the leader of the Foundation. (I’m thinking Bill Sage!) They are in “court” (the court has an apocalyptic cool dungeon look) and on trial with the Foundation’s group. The Foundation group serves as judge, jury, and executioner.

Bill Sage delivers this calm yet spine-chilling performance. He barely blinks. He is another actor with a long resume. American Psycho, Nurse Jackie, We Are What We Are, EvanHand, The Dinner Party, Flirt and more. His fellow Foundation members are just as menacing and talented. Chaney Morrow (Haunt, On Location, Dark Waters) Chaney was in the film Haunt with Damian Maffei. If you haven’t seen Haunt, I recommend after you watch Wrong Turn (2021), go watch Haunt. Damian Maffei (Haunt, A Nun’s Curse, On Location) plays Morgan. From the last interview, I had a chance to talk with Damian and he said he was learning a new language to play his character in Wrong Turn (2021), and he did. Chaney and Damian will also appear in another film together called Time’s Up (2021). It was written by L.C. Holt and Maffei, and directed by L.C. Holt (You’re Next).

The foundation people are a self-sustaining family unit, and Jen is trying to reason all of this out. Charlotte Vega is delivering an insane performance as Jen. Her character is strong yet vulnerable and scared. She is trying to bargain and reason her ways of thinking into the Foundation’s ways.

I instantly thought about Ravenous (1999). The music, that slow-telling yet heart pounding music that lets you know there is something menacing coming. It makes the hairs on the back of your neck stand up. They are unpredictable to Jen’s group. The court scene and what follows is unnerving.

Okay, so we fast forward to Scott looking for Jen. Matthew Modine’s character has that look in his eyes. The look when you had enough. You’ve had enough of EVERYTHING. He’s going to the trail. Aileen (Amy Warner) and her nephew Ed (Cory Scott Allen) offer to help him. Well, that didn’t last long. It seems even the best hunters can’t get through what the Foundation built. Again, the traps are ferocious. These crippling traps are lethal.

The ending is certainly unexpected. Mike P. Nelson delivered on Wrong Turn (2021). It is a great film. It’s a fun movie, it has that terrifying fun aspect. The cast does an excellent job. I would recommend watching Wrong Turn (2021) and safe travels.

For Tickets and Information: www.FathomEvents.com