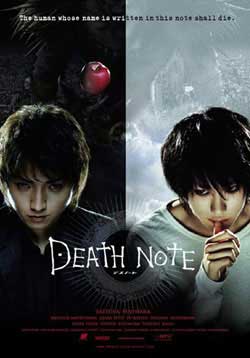 Some teenagers walk around with a chip on their shoulder: Light Yagami, the alienated hero of the macabre fantasy-adventure Death Note (2006) has a Shinigami (god of death) named Ryuk hovering over his shoulder. Although he’s one of the top-ranked high school students in Japan, Light is repulsed by the lack of justice he sees in the world–until he finds Ryuk’s notebook, the Death Note. If anyone writes the name of a human in the book, that person dies minutes later. After testing the Death Note’s powers, Light launches a grandiose vigilante campaign to rid the world of criminals to create his vision of a perfect society. But the baffling string of deaths inevitably attracts the attention of the police, who turn the case over to the secretive master crime solver known only as L. Although he’s as brilliant as he is arrogant, Light finds himself hard-pressed by L in their deadly game of cat and mouse. He tries to use Misa, a teen idol who’s acquired her own Death Note and Shinigami, to destroy L, but is outfoxed by his nemesis. To ensure Light does nothing without his knowledge, L has them handcuffed together. Although it begins slowly, Death Note gets better with each installment, as the stakes grow higher in the duel of wits between Light and L. Director Tetsuro Araki plays up their physical differences: Light is cool, handsome and well-groomed; slovenly L seems to think with his twitchy bare feet as well as his redoubtable brain. Neither character is particularly likeable initially, but they become intriguing as the viewer gets to know them. (Rated Teen+ Older Teen, suitable for ages 15 and older: grotesque imagery, violence, violence against women, tobacco use)

REVIEW:
Light is a very troubled genius. He thinks he can save the world by ridding it of criminals and lawbreakers. This opportunity is given to him in the form of an object called “The Death Note”. The Death note is only obtained from a god of death who happens to drop it in his travels. Once a human obtains this object, they can influence instant death upon those entered into the notebook. The notebook is not without its rules.

L, a highly intuitive detective is called into the case to help the law enforcement figure out how these deaths may be caused. At first, e s only revealed thru a computer prompt featuring a single letter and a voice changed intercom. His secrecy is for good reason. He fears that if too much is known about him, he also could fall victim to the recent outbreak of targeted deaths. Thru is keen use of observation, he is able to graph out and fine tune how and who might be causing these deaths. Of course, the element of a “god of death” is one that isn’t considered with it being a myth. This further complicates the case and prolongs the tracking of a single source. Kira is the name given to this fictional character whom the media needs to identify a source of killings. Light, a law student himself is in fact this “Kira” who becomes more obsessed with his ability to kill off anyone he finds getting in the way of his purpose.

Kira or Light becomes darker with time which leads to the murder of innocents including several of the FBI team. The process is simple. Write the name of the person who’s death you desire in the notebook while focusing on their face and they will suffer a heart attack. As Light continues in his quest and alludes the law, he is also accompanied by his assigned “god of death” who calls himself Ryuk. Ryuk is in fact a huge monster looking entity that can only be seen by Light. His nature is odd and somewhat sarcastic at times but at the core is still a powerful reaper. He appears through out the film frequently eating apples and flying next to Light. Those who touch the notebook can also see Ryuk, usually to frightening conclusions.

The film directed by Shusuke Kaneko is a classic tale f good vs evil it a muddied element of right and wrong. We have our protagonist and antagonist who each seem to weave in and out of these ideals as well. At the heart of things, Light means good with the welfare of his country at heart. Though to control death and take others lives as corrupt as they may be is still a power that one individual should to possess. L realizes this despite the fact of the victims being worthy of such punishment. His quirky crime solving skills begin to narrow into the secret of Kira and who that individual might be. The film stars actors: Tatsuya Fujiwara, Kenichi Matsuyama and Takeshi Kaga.

The DVD features a nice selection of extras including a video diary, trailers, a making of and a Death note conference. It is clear that the movie has spawned a devote fan following that has catapulted it forward with a franchise in the making.

The Set I am reviewing is a soon to be released set which includes Death Note 1 & 2 with 2 additional extras DVD’s. The DVD will also be released in a Bluray format. Death Note 2 is a nice companion that pics up right where the original left off.