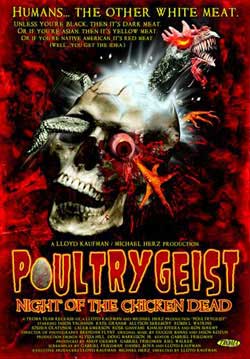 What happens when a fast-food chicken franchise is built on a sacred Native American burial site rife with restless spirits? Zombie chickens! Now it’s up to high school grad Arbie (Jason Yachanin) to find a way to destroy the featherless fiends. Or will the fowl beasts turn the hungry drive-thru customers into the insatiable undead, too? This gleeful free-range romp through the supernatural also features Kate Graham and Allyson Sereboff.

What the world really needs is a musical horror comedy with lipstick lesbians, Native American Zombie Chickens rising from the dead to satirize American’s love of the evil fast-food industry. No really, we do need a movie to make fun of fast-food companies with all these elements and a whole lot more and once again Troma has come to our defense. The movie does something to offend everyone: be you Native American, be you special needs or just someone who loves chickens and we do mean LOVE chickens. 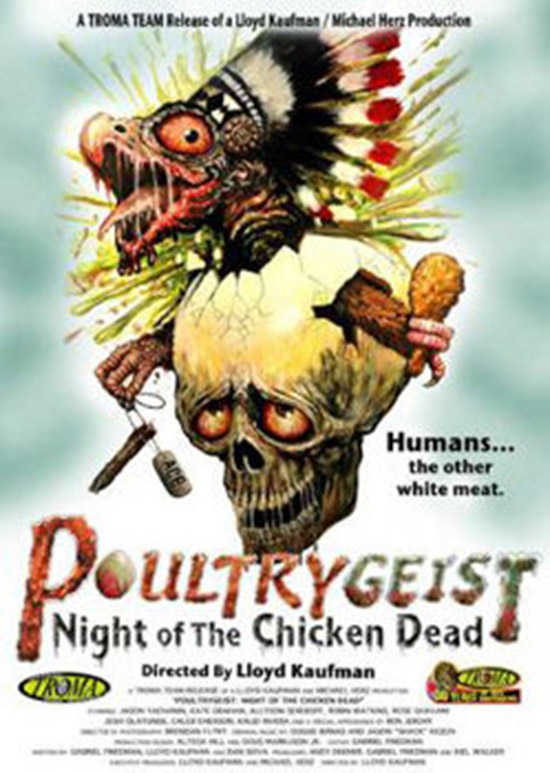 The leads, Arbie (Jason Yachanin) and Wendy (Kate Graham) are surprisingly appealing in an innocent sort of way and make it easy to root for their love. And their love is a strong element in the movie and with lesser actors you really wouldn’t care if they lived through the Night of the Chicken Dead or not. I hope to see both in other movies in the future. All the major parts are well acted. Being a Troma film the movie is full of farts, poop and vomit to the point you will consider pooping and vomiting just to get even. 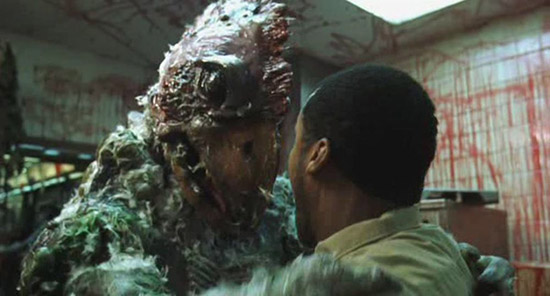 Stand out songs are the theme song, Arbie and Wendy’s love song (fast food love) and the song between old and young Arbies. The one cut musical number is also included and I don’t miss it at all.

Besides having great musical numbers there are some good jokes in the film. I really loved the chicken zombie who declared that the skin of her victim was fattening but the best eating. For being a low budget movie there are some pretty good special effects: the American Chicken Bunker massacre scene looked almost good enough to get in a Romero Zombie film. Even better is when the effects are not so special and the characters react to it as well. Nice to see a low budget movie that is still shot on 35mm film, way to go Lloyd. 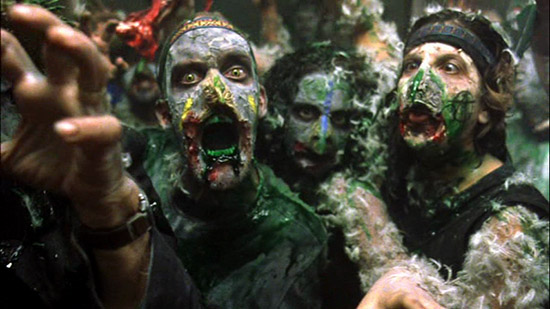 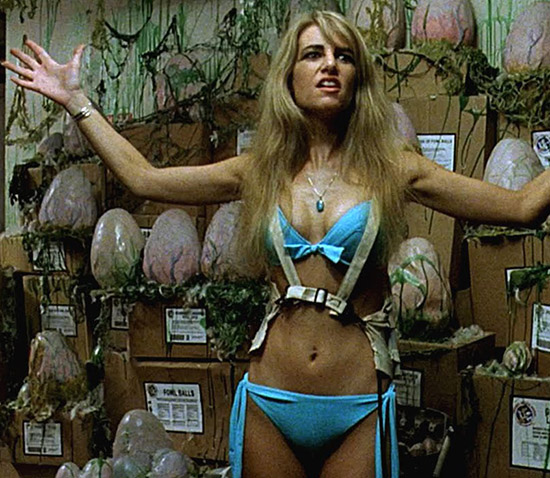 The behind the scene movie on the two-disk set is informative and shows that the shoot was far from a picnic. Lloyd makes fun of the some of the local actors, the director of photography comes off as a prick (even though he did ask one of the extras to marry him, no really, I think they are going to get married.) and poor Allyson Sereboff looks like she suddenly thinks she was dragged into a p*rn movie and just wants to cry. You even get to see them blow up the two models of the restaurant long after the movie has wrapped.

* The musical numbers are hard to get out of your head and I have tried but they are really catchy.
* Kate Graham who is just so cute as a button despite being in a film that asks her to be half-naked and a lipstick lesbian.
*Lloyd Kaufman who makes a nice appearance as old Arbie.
*The use of Buffalo as Tromaville (hey its my hometown I have to love movies filmed here).
*Mickie (Allyson Sereboff) who shows no sign in the movie the horror she shows in the behind the scenes footage of being in a movie like this, being asked to do things like that. Allyson, you do a really good job, as Mickie just please don’t cut an album in the near future, please. 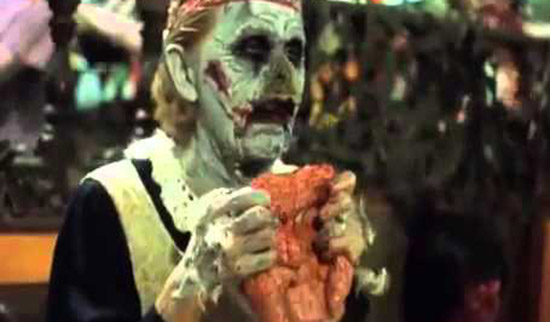 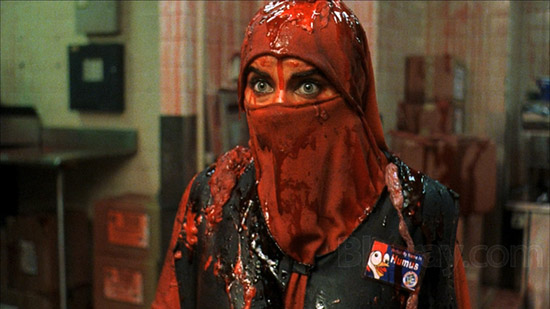 A version of Night of the Living Dead with Native American Chicken Zombies that wants us to think about our fast-food culture and does it with boobs, blood and musical numbers has to be a film that you would want to watch late into the night. Pop up some popcorn, grab your favorite chicken and watch until you have to fart, poop or vomit. I give it 3.5 stars out of 5. It was released by Troma Films and you can find it on Amazon.com.