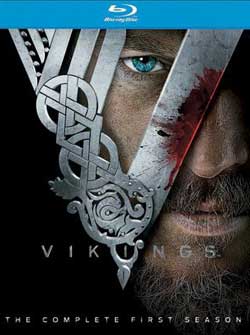 Vikings follows the adventures of Ragnar Lothbrok the greatest hero of his age. The series tells the sagas of Ragnar’s band of Viking brothers and his family, as he rises to become King of the Viking tribes. As well as being a fearless warrior, Ragnar embodies the Norse traditions of devotion to the gods, legend has it that he was a direct descendant of Odin, the god of war and warriors

Everyone loves a good plundering…I always say. Inspired by the age old tales of raids, trades, and exploration comes a Canadian-Irish TV series drama titled “Vikings”. The series which ran 9 episodes in its first season premiered on the “History” channel in March of 2013. The series was written and created under Michael Hirst and was later released to bluray in October, 2013. Upon release it was also announced the series was renewed for a 10 episodes season 2. 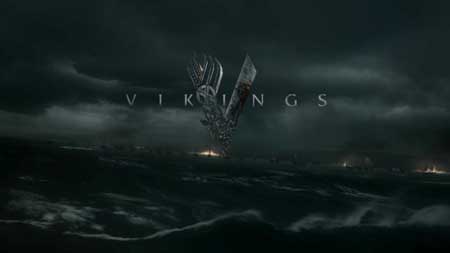 Beautifully shot and set within the locations of Ireland and Canada, at times you tend to forget this is such a brutal cutthroat movie as the characters live, breath, and battle within its tranquil oceans and scenic forests.

“Vikings” is primarily centered on the life and adventures of one ambitious Viking named Ragnar Lothbrok (Travis Fimmel. But before we get into “his” story, the series primary intention falls heavily upon the re-creation of the common Vikings lifestyle and the culture that they endure. I found while following in the adventures that the series tends to positively bias its viewers towards the Vikings who in fact were on the most part brutal cold blooded killers. 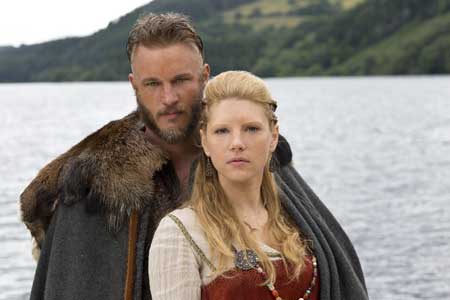 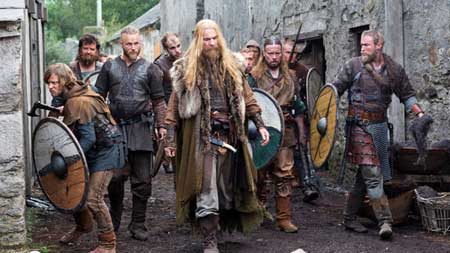 Vikings….they take what they want, when they want it, will slit a fellow villagers neck or chop his head off without batting an eye. All performed under the culture of who they are and the Gods they serve. Thor, Odin, and Freyr are the names that we hear the most as they justify their actions under the guise that they are serving their Gods intention with a promise of Valhalla in the after life. Many of this origin, often look forward to a worthy warrior’s death.

The subject of religion is often brought up with the Vikings simply dismissing God at any chance they get. You might say that at time the series borders on extreme blasphemy as they plunder and rob holy men of their sacred relics used in religious gatherings. Of course the irony to this is discovering how dedicated they are to their religion and cause.

Like the Romans, the Vikings seem to be highly skilled as fighters, often overcoming challengers without much of a resistance. Their reason for living centers on the idea of the battle itself with each season promising another chance for them to raid and pillage who ever and where ever they come across. 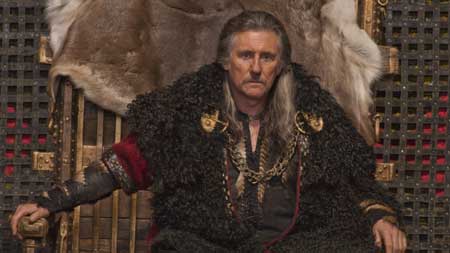 Women are servants, sometimes slaves and other times warriors. Lagertha Lothbrok (Katheryn Winnick) is one such warrior who often fights among the men with her proven knack for battle and holding her own. Through out the series she is referred to as a “shieldmaiden”. Lagertha is wife to Ragnar Lothbrok , and this is where our story begins.

Ragnar, the show’s main protagonist and village hero has well-established a reputation as a top notch warrior. He resides in a coastal village with his wife and children who live off the land while occasionally securing riches from a successfully raid. His brother and best friend Rollo is a fellow warrior who often accompanies Ragnor in battles providing a formidable force in alliance with Ragnar and his group.

The group is mainly comprised of early medieval Scandinavian Norsemen, all barbarians in their own rights. The times they live in is plagued with death due to the brutal nature of constant battle and sharp punishment. The town they reside at is under the rule of “Earl” Haraldson (Gabriel Byrne) who owns most of the land. Haraldson is the primary leader law and order enforcer. It is Haraldson and Lothbrok who eventually go head to head becoming bitter enemies as their conflicts grow.

“Vikings” is a worthy attempt at demonstrating the Viking culture as it has been told over generations. There is this odd sense about it that runs against the grain of what we have come to know from films based on this era. While we do see compassion, especially from the hand of Ragnor, there is also a cruelty that is almost taken for granted at times. Ragnor’s ambition fuels the story while at the same time building an inner conflict within his brother Rollo who has to stand in Ragnor’s shadow.

Ragnor gains a reputation as being the first to sail West and discover lands filled with riches. Even at the disapproval of the town’s “Earl”, Ragnor is intent on proving himself while feeding his notion of other lands. His reputation instills praise and conflict finally working its way up to challenges that aim to set him up as the future “Earl”.

A fantastic series, “Vikings” is well shot, provides loads of action, and instills heavy drama into a perfect amount of cultural originality, battle and confrontation. Fans of television action drama should jump on this one if you haven’t already. It’s a series that flows great when watching all in 1 shot and holds enough diversity that a second viewing is not out the question.  On bluray, this series look great and opens with an impressive title credits over a song (“If I Had a Heart”) that will stick with you long after the credits roll.