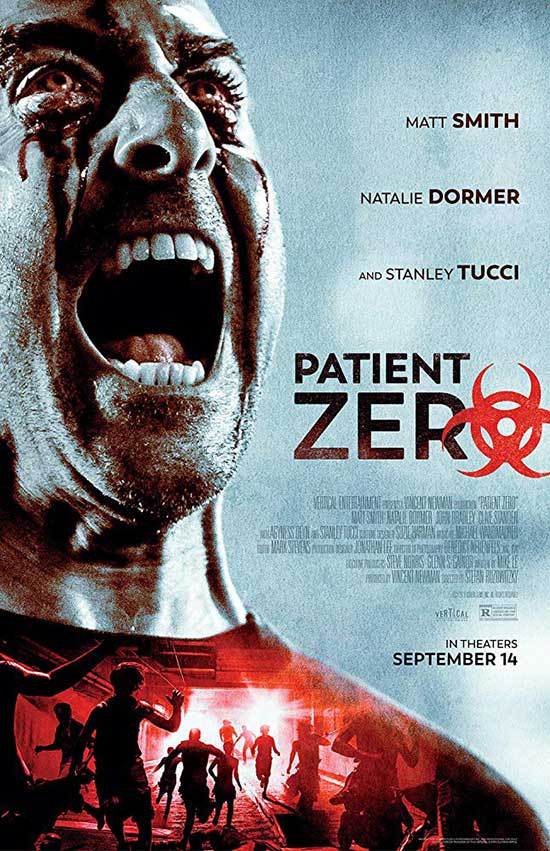 After an unprecedented global pandemic turns the majority of humankind into violent “Infected,” a man gifted with the ability to speak the Infected’s new language leads the last survivors on a hunt for Patient Zero and a cure.

A medical nightmare spreads across the country as people turn into the “Infected”, who become savage killing machines. Humanity is reduced to a few pockets living in bunkers as scientists attempt to find Patient Zero to create a possible cure. 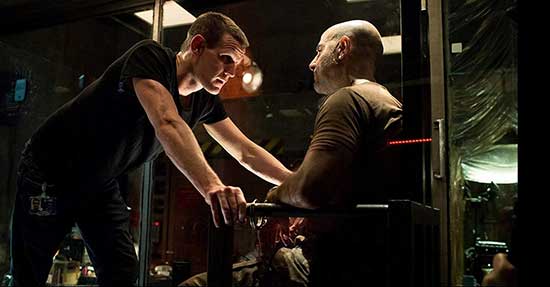 It is refreshing to see screenwriters tackling such original and inventive scripts.

“Patient Zero” treads territory we have seen trampled to death over the last few – what is it now, decades? The old post-virus/zombie routine. The sub-genre and trope can still yield some interesting variations, which means this movie could reach beyond its self-imposed limitations.

Morgan was bitten by an Infected when he and his wife were attacked. For whatever reason, Morgan did not turn into a rabid, bloodthirsty killer. What did happen is his tainted blood allows him to understand the strange, guttural language of the Infected as well as speak it. The research team in the bunker is using his ability to narrow their search for the elusive Patient Zero.

Helping direct the medical research is Dr. Gina Rose. She has a close working relationship with Morgan. A very close relationship. When taking someone’s pulse turns into a frustrated bout of shagging in a restroom, you really can’t pretend to be just work mates. Still, the two of them seem to be finding a likely Ground Zero for the illness in Minnesota, of all places.

In any post-apocalyptic, claustrophobic military facility tasked with “protecting” scientists, there is bound to be one officer who finds all the science to be a waste of time and the likely end of Mankind. While this cliched character seems to always show up to hassle the “heroes”, it does not mean that they are wrong. Military might will not stand up to billions of Infected, and the repeated trips to gather more Infected result in more men lost each mission.

When an Infected sneaks into the bunker in a body bag, the crew capture this person and interrogate him.

The “Professor” acts unlike the other Infected. Loud music does not make him react violently. He calmly debates the meaning of “humanity” with Morgan instead of spitting out one and two-word responses. He argues that the Infected are the next step in Man’s evolution. The Professor will not speak of Patient Zero; however, he does make it clear that the Infected know far more about Morgan and the bunker than the humans expect.

In general, “Patient Zero” skirts its low budget with effectively cramped up sets that must have been maddening for the actors but perfectly fit the minimal needs of the script. You have the interrogation set, the cells holding Infected, and Morgan’s room. Everything else is fairly generic. Everything looks like people have been crammed into these spaces for nearly a year.

With the likes of Matt Smith, Natalie Dormer, and Stanley Tucci in the lead roles, you get performances that hold up in the face of a cliché-ridden slog through plot points most horror fans can list in their sleep. Most interesting performance goes to Stanley Tucci. I never saw him as physically imposing, but he is convincingly threatening without his shirt on. Beyond that, Tucci only has to maintain a smug air of utter certainty.

Matt Smith hits all the cliched marks for the “hero” role. His biggest issue is maintaining a consistent American accent. Since his character isn’t an American soldier and is just a citizen, he could have an English accent. That would save a few scenes where he has trouble grappling with the expressing emotion in an unnatural accent. Otherwise, he does a dandy job.

“Patient Zero” fails at the script level. While the standard plot points provide a very safe canvas to work from, there are only hints of what could have been a deeper, but far harder to develop, examination of the nature of either the illness, human evolution, or both. The fact the Infected innately start speaking a different language that ignores the original human’s knowledge of standard language could be a hint towards the rumored universal language of the gods. What if the Infected really are the next stage in Humanity’s evolution? Where could such a savage mindset take the world?

Instead of insight, we watch the military-minded guy be the standard jackass, the funny best friend get perfunctorily killed, the expected tension of Morgan and Gina’s on-again/off-again non-relationship (and the expected complication), and constantly-telegraphed assault on the bunker. These events are to be expected, just part of the post-apocalyptic story shorthand. Topping the list of “Are you kidding me?” clichés is the motorcycle, covered with a simple tarp and left, untouched, with gas in its tank for roughly a year while exposed to weather fluctuations, that fires off on the first crank. Possible, but not very likely, much like the rest of the events in the movie.

Visually, the movie works well. The unnervingly compact space feels appropriately uncomfortable. The dark lighting matches the overall tone while supporting the concept of living on minimal resources. Director Stefan Ruzowitzky keeps the film claustrophobic and tense by using a lot of close-ups and longer shots to show the lack of options available for movement and/or safety.

“Patient Zero” may have started out as an inventive spin on a pathetically shopworn idea. Unfortunately, the scriptwriter just opted to grab the lowest-hanging fruit, leaving some good actors to purposelessly flail about in cramped quarters with nowhere new to go in the end.