A naive young boy unknowingly becomes the pawn of a serial killer.

Young Douglas Whooly is a lonely little boy. Living with his mom, he spends his days in the suburbs playing a video game on his hand-held console, where his character is tasked with assisting the Devil in sending souls to Hell. Little does Dougie know that life for him will soon be imitating art…

Satan’s Little Helper, written and directed by Jeff Lieberman, is a black comedy horror originally released back in 2004. Lieberman previously directed the 1988 sci-fi comedy horror Remote Control, a similar kind of likeable B-movie. It’s pretty clear from the start that we aren’t dealing with a big budget movie here, but Lieberman is pretty skilled at getting the most out of what he’s working with. 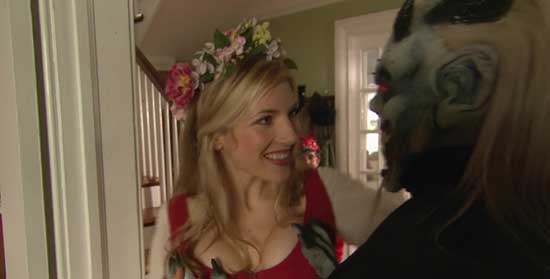 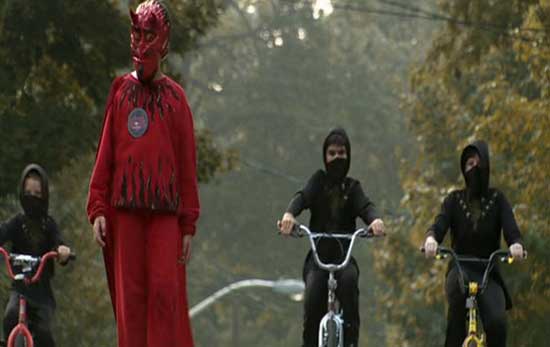 Dougie, played by nine-year-old Alexander Brickel, is looking forward to his sister Jenna (Katheryn Winnick) coming home to visit for Halloween. He’s not too impressed to discover though that she has her “friend” Alex (Stephen Graham – not the English one who played Al Capone in Boardwalk Empire) in tow. Mom Merrill (Amanda Plummer, who you may recognise from Pulp Fiction and more recently the German thriller A Young Man Of High Potential) is happy to just go along with whatever her kids want. The cast are by and large fairly good in their roles; Plummer and Winnick in particular exude a weird spaced-out energy and spark off each other pretty well. Brickel as Dougie is pretty likeable, a step up from the usual child actor standards of the time in this kind of movie. 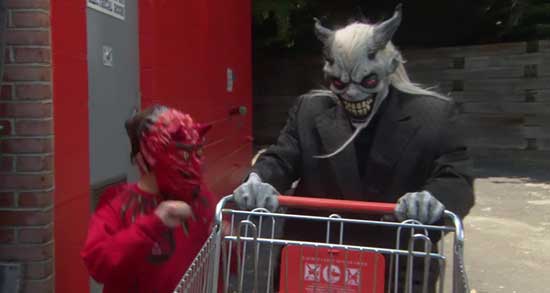 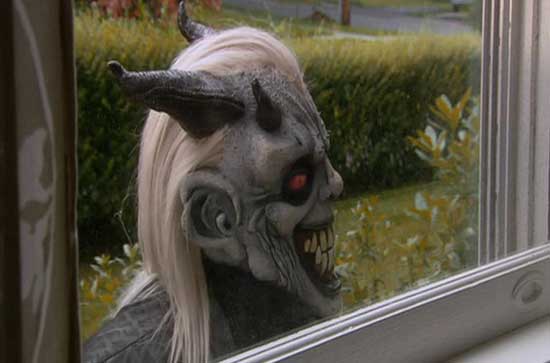 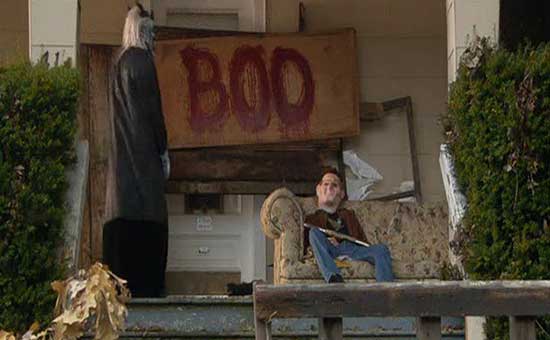 Things get interesting for Dougie when he storms off after an argument with his sister, wandering the streets in his Devilish red trick-or-treat outfit. Still busily sending souls to Hell on his hand-held (a charmingly cheap prop clearly recycled from an old piece of electronic equipment), it isn’t long before he stumbles across a strange figure, clad head-to-toe in black and wearing a sinister grey Halloween mask complete with rictus grin, horns, staring red eyes and silver goatee. When we first meet this this weird character on his front lawn, he is busily engaged with gleefully arranging some (clearly real) dead bodies in amusing positions to create a Halloween display for the local kids. 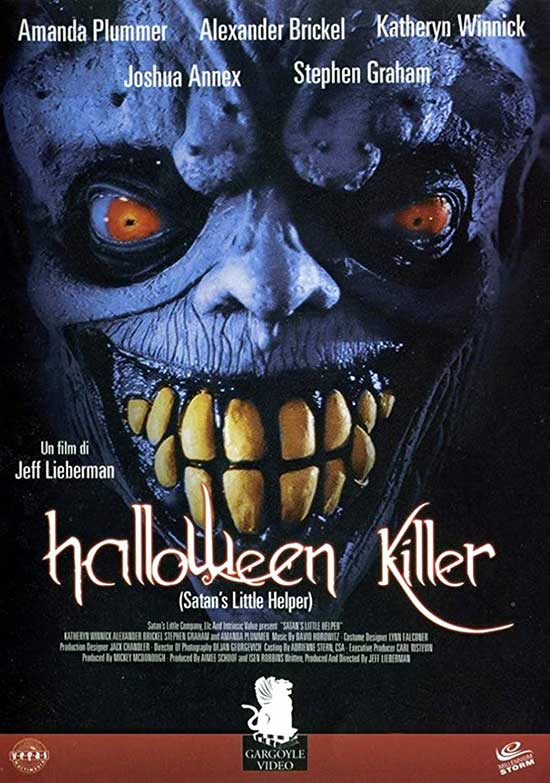 Dougie’s first thought is that he’s been lucky enough to stumble across Old Nick himself, and naturally his first thought is to ask him whether he’d be willing to help out in despatching the unwanted Alex to Hell. “Satan” quickly offers his assistance by way of the only means of communication he seems able to use, which is by nodding his head and making hand gestures. The two new best friends then skip off hand-in-hand, to embark on an increasingly dark adventure. In the meantime Alex has decided to try and bond with Dougie by impressing him with a Halloween costume. Dougie has other ideas however, and is more interested in getting Satan to send Alex straight to Hell. Proceedings really kick off when Satan arrives back at the family house, with everyone convinced he’s actually Alex wearing his Halloween outfit. 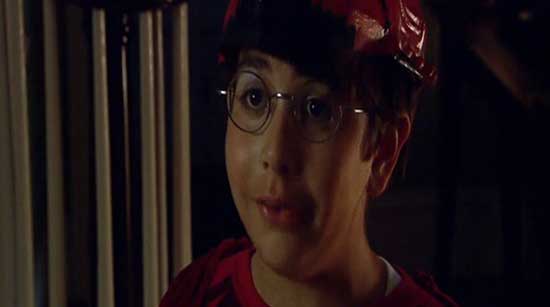 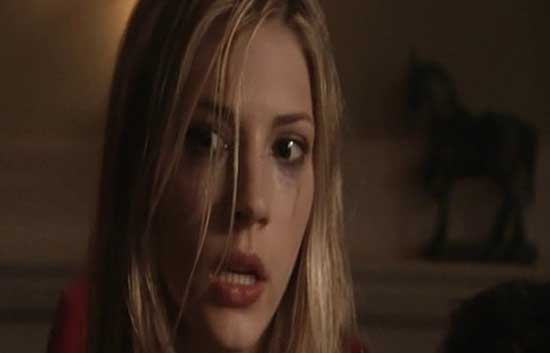 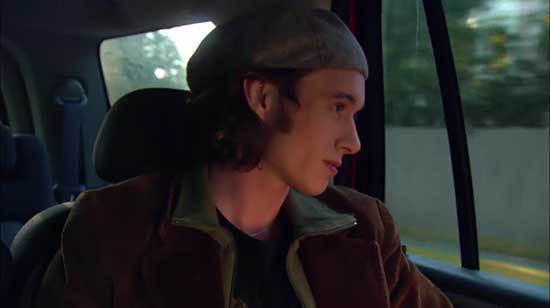 We are never strictly told who – or what – Dougie’s friend really is, whether he is human or something more supernatural; or indeed the Devil himself. His costume is simple, basically a black polyester suit and a cheap, immobile Halloween mask; this really works in the film’s favour though, as the mask combined with a Michael Myers-like commitment to remaining totally silent actually proves to be effectively sinister, especially in lengthy close-ups where people are beginning to wonder just who is behind the mask. 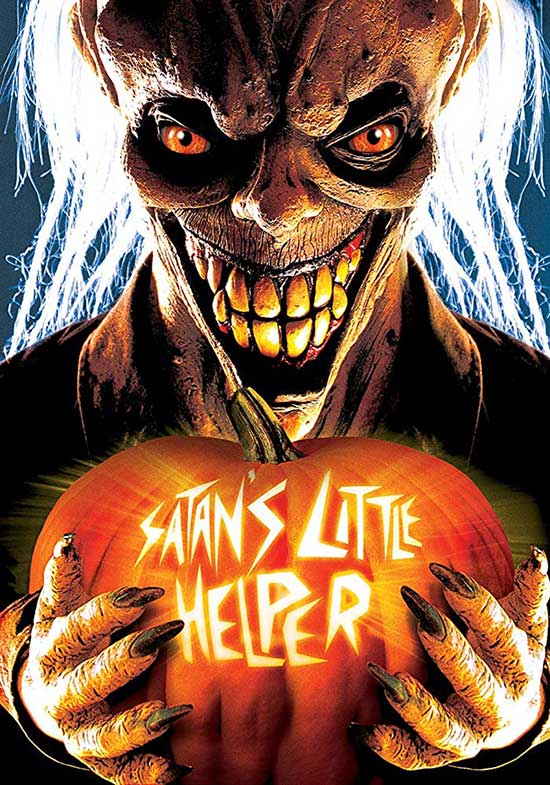 Lieberman and the cast are clearly in synch with the tone of the movie; tongue-in-cheek is very much the order of the day, but that isn’t to say there aren’t some effectively creepy scenes throughout. There are just as many laugh-out-loud moments however; not least among these are Satan indulging in an impromptu bout of underwear-sniffing, a cat’s recently killed corpse being used as an improvised graffiti spray can, a deranged shopping cart rampage through a mall parking lot and some truly dreadful fake British accents. I can also honestly say this is the first movie where I have seen a masked killer threaten a woman dressed as Carmen Miranda – complete with fruit hat – with a pizza cutter. 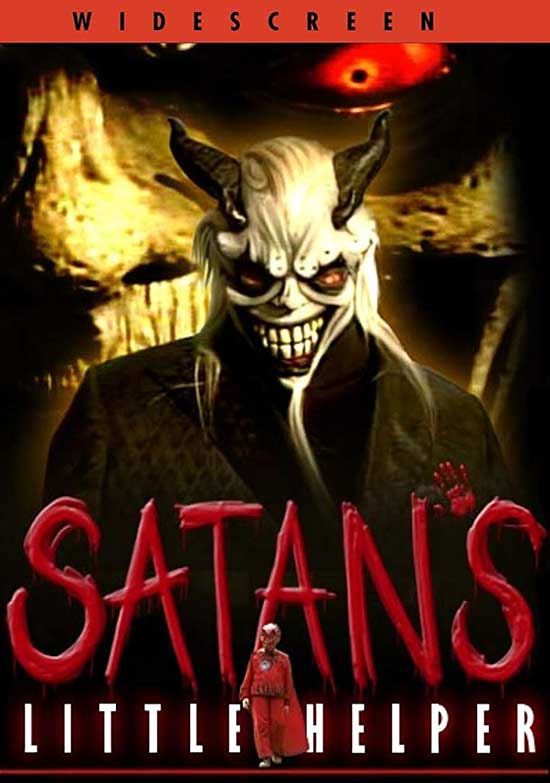 The story is pretty simplistic, and in all honesty it isn’t hard to guess where things are going when masks and costumes start getting swapped around, but this is overall a decent little movie that goes to show what can be done with a willing cast on a low budget. While the effects are definitely on the cheap side (some of the least convincing fake intestines you’ll ever see, as well as a helicopter scene where they clearly couldn’t afford the helicopter so instead made do with a soundtrack recording of one and a searchlight) these only add to the movie’s considerable charm; if you’re in the mood for something witty but with the odd shiver thrown in you won’t go far wrong with this one.