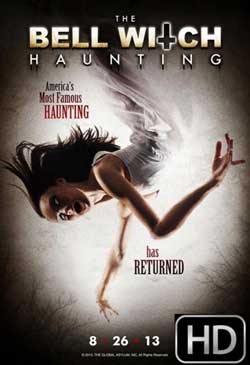 Based on true events. The Robertson County Sheriff’s Department has released footage found on the bodies of the Sawyer family’s cell phones and video cameras. What was first thought to be a murder-suicide is now believed to be the return of a centuries-old demon responsible for America’s most famous paranormal event

Considering the multitude of titles that have surfaced under the “found footage” moniker in recent years, a section dedicated solely to this unruly subgenre would not be a shocking sight at the local video dive.  It would certainly make the “What to rent?” conundrum smoother sailing for those folks who hate them.  I, however, still find myself intrigued and sometimes delighted (See “Frankenstein’s Army.”  Seriously, see it.) in my viewings of these low-tech stabs at greatness.  Hell, I maintain “Apollo 18” was a groovy flick, a statement some may feel deeply threatens my integrity. 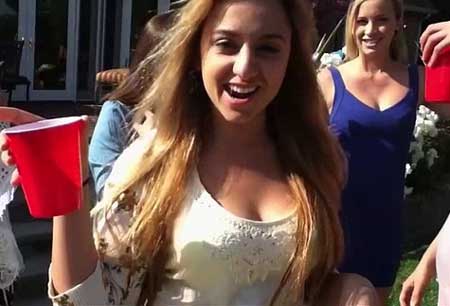 The story of the Bell Witch, who haunted wealthy farm owner John Bell (and, more aggressively, his daughter Betsy) throughout the early 1700s in Adams, Tennessee, has been oft-told since the turn of the current century. A film bearing the same title of our offering was released in 2004, followed by “An American Haunting” in 2005, and “Bell Witch: The Movie” rounding out the period piece triple threat in 2007.  All were based directly on the legend, but not one still casts a shadow over its scary movie brethren like that of 1999’s “The Blair Witch Project,” which added a sinister child-snatching spin to its specter’s history whilst borrowing heavily from this dead antagonist’s tale.

One would assume, given the title and found footage conceit, that “The Bell Witch Haunting” would be an Asylum artistic rape of “Blair Witch.”  Though utilizing the oddly tropical January climate in Tennessee (note to director Glenn Miller: The Volunteer State is not located in central Africa) for a few pivotal witchy woodland shenanigans, much of the film takes place within the walls of the Sawyer home, owing a greater debt to the “Paranormal Activity” franchise.  Truth be told, “Bell” pickpockets whatever it can get its grubby paws on to serve each momentary purpose.  Slapping elements of “The Exorcist,” “Darkness Falls” and countless others into the wildly uneven casserole, it throws everything at its audience including (oh yes) even the kitchen sink, praying some of it sticks.  Very little does, but watching this Amtrak jump the rails is never short of interesting.

Having just moved to Adams from Chicago into a new domain located on the old Bell property and mere feet from the forest rumored to be inhabited by the malevolent spirit, the Sawyers could very possibly be the thickest fictional white people to ever reside in a haunted house.  Personally, I’d be putting a temporary hold on the unpacking after a strange-acting party guest and her boyfriend are brutally murdered on their drive home from the shindig.  This occurs, not after setting up any sort of coherent narrative, but in the opening minutes of the movie.  They are discovered by the true hero of the piece, Officer Bungalon (Jason Kakebeen), who is apparently the only cop within a fifty mile radius.  Ever.  This could explain why a rural law enforcement professional is outfitted with an expensive chest cam.  Obviously, his superiors worry he may accidentally shoot someone in a sleep-deprived stupor. 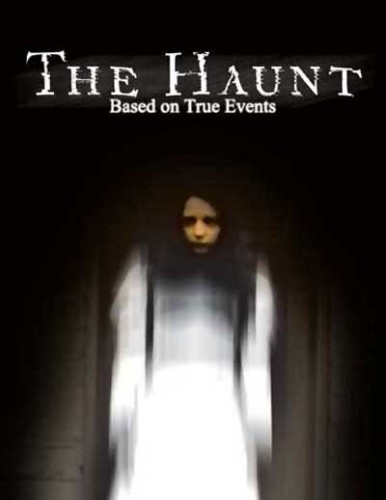 From there, “Bell” wavers between outlandish shock scares (two appearances of the ghost early on that are never mentioned again, the infamous sink) to dull bits of lights turning on and off, doors creaking open, et cetera.  There is no build here whatsoever until the final fifteen minutes, merely unconnected occurences rambling over one another like drunk housewives discussing last week’s “The Voice.”  The continuity is a nightmare. Skipping inexplicably in time and at one point introducing a camera angle days before the actual camera is placed in that particular location, this entire link could be dedicated to the c**k-ups alone.  The deaths (and, to its credit, there are plenty) range from silly to hysterical, my personal fave involving an unfortunate laborer who lets loose with the most cartoonish shriek this side of a “Loony Tunes” short as he meets his end via the witch’s ability to manipulate electricity.  She also flies at one point, in a dazzling display of effects most likely created with a clip art program from 1998.  Don’t even get me started on why these people have flashlights equipped with digital cameras lying around the house, powered up and at the ready. 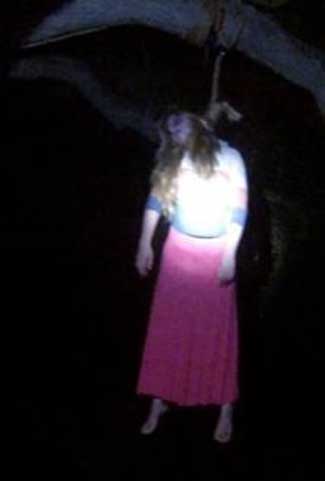 Though given very little to work with, the main quartet of performers portraying the Sawyers are more engaging than the roles deserve.  As hip parents Scott and Kristi, Drew Cash and Desi Ivanova hold up well until the final third, when he becomes sort of possessed (I think) and bellows “We’re not leaving this house!” at the others approximately four hundred times as she mewls and stage weeps.  Catherine Alter and Andrew Hellenthal fare better as teen siblings Dana and Brandon, but nobody involved emerges from this wreck completely unscathed.  The lovely Alter, though no rising starlet, is indeed a trooper.  From unending shots of her suffering night terrors, to a scene where she is found by the eternally on-duty Bungalon in a storm drain munching on a dead raccoon, to floating around the dining room in goth club make-up as a priest attempts an exorcism, Alter tries her damnedest to sell this.  They all give it a commendable go, which is more than I can say for many Asylum productions.

A final claustrophobic crawl through a subterranean cave in pursuit of the witch brings a belated touch of intensity to the proceedings, even if five other better films are called to mind in its presentation.  The Asylum continues their giddy streak of disposable nonsense with “The Bell Witch Haunting,” another fitting entry in the company’s dubious catalogue.  So many differing levels of awful are on display here, it’s nearly mesmermizing.  Watch it with a few beers and a gaggle of wiseass pals.  You might get your money’s worth.