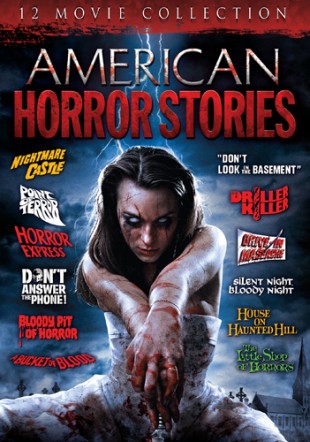 16 Hours of retro greatness! Mill Creek Entertainment has created a new pack that makes things real easy for viewers to grab a load of classic horror films in one celebratory sitting. If you were only provided just 2 of the “Don’t” movies such as “Don’t Look in the Basement” and “Don’t Answer the Phone”, that would be a deal in itself. The good news is that you get 12 powerful horror films for just $10! 1979’s “Driller Killer” or 1974’s “Drive-In Massacre” are gems not to be missed or perhaps you want to start with the 50’s classic “House on Haunted Hill” and “A Bucket of Blood”…..take your pick! What a perfect way to gear up for this Halloween season for less that a $1 per movie. The set is called “American Horror Stories“, grab em while their hot! (PS also a great way to save some space on your DVD shelf!)

Please see info below for all the traditional synopsis information on the included contents:

Point of Terror
Starring Peter Carpenter, Dyanne Thorne, Lory Hansen
(1971) – Color – 88 Minutes – Rated R
When lounge singer Tony Trelos has a chance meeting with the beautiful wife of a powerful record producer, he becomes engulfed in a twisted web of murder and adultery.

House on Haunted Hill
Starring Vincent Price, Carol Ohmart, Richard Long
(1959) – B&W – 75 Minutes – Not Rated
Eccentric Frederick Loren and his wife have invited 5 guests to a “house” party at the mysterious mansion on Haunted Hill, which is reported to be inhabited by evil spirits.

A Bucket of Blood
Starring Dick Miller, Barboura Morris, Anthony Carbone
(1959) – B&W – 65 Minutes – Not Rated
Things soon turn macabre when a group of ‘far-out’ beatniks inhabit a world of their own fantasies. The twists and turns of fantasy disappear as a tormented man slowly loses his mind.

The Little Shop of Horrors
Starring Jack Nicholson, Jonathan Haze, Jackie Joseph
(1960) – B&W – 73 Minutes – Not Rated
Seymour works in a skid row florist shop and is in love with his beautiful co-worker Audrey. He creates a new plant that not only talks but cannot survive without human flesh and blood.

Nightmare Castle
Starring Barbara Steele, Paul Muller, Helga Line
(1965) – B&W – 90 Minutes – Not Rated
This tale of obsession, madness and depravity stars Steele as a cheating wife who is tortured to death by her sadistic scientist husband.

Silent Night, Bloody Night
Starring Patrick O’Neal, John Carradine, Walter Abel
(1974) – Color – 88 Minutes – Rated R
Maniacs have taken over the asylum and they want bloody revenge for crimes committed in the dark and distant past in this brutal small-town tale of terror.

Bloody Pit of Horror
Starring Mickey Hargitay, Walter Brandt, Louise Barret
(1965) – Color – 74 Minutes – Not Rated
Seeking a gothic background for a horror photo shoot, five cover girls break into what they assume is an uninhabited castle. However, they’re not alone for residing in the castle is the reincarnation of a 17th Century Crimson Executioner.

The Driller Killer
Starring Abel Ferrara, Carolyn Marz, Baybi Day
(1979) – Color – 96 Minutes – Not Rated
Reno Miller is a starving artist who is struggling with everything in his life, including the nightly urge to bury his power drill deep inside the local homeless residents.

Don’t Look in the Basement
Starring Rosie Holotik, Camilla Carr, Bill McGhee
(1973) – Color – 92 Minutes – Rated R
In Stephens Sanitarium, therapy has been replaced by torture. Under the guidance of the new director, the stronger patients prey on the weak, as they plunge deeper into madness.