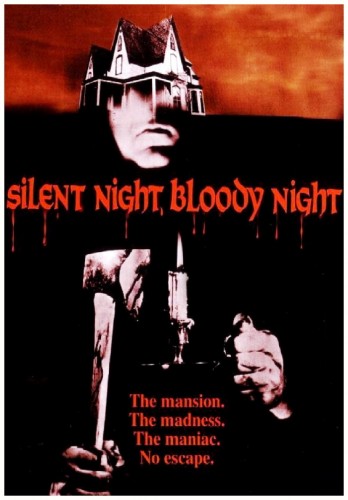 SYNOPSIS:
“Wilford Butler returns home on Christmas Eve and his house had been turned into a mental institution for the criminally insane. But the day of his return, he is set on fire and dies. The townspeople believe his death was an accident, and the institution-house is later closed down. Wilford leaves the house to his grandson Jeffrey. A few years later, Jeffrey finally decides to sell his grandfather’s house, but the townspeople including the Mayor have mixed feelings on keeping people away from the house, especially when a serial killer escapes from another institution and finds refuge there. The killer makes frightening phone calls and kills anyone coming near the house. But what does the killer have in common with what happened to Wilford Butler years before?” (courtesy IMDB)

REVIEW:
I have something extra special for you this week from Lloyd Kaufman, the producer of such cinematic classics as The Toxic Avenger (1984), Sergeant Kabukiman (1990), The Class Of Nuke ‘Em High (1986) and Tromeo And Juliet (1996). Before Halloween (1978), before Black Christmas (1974), there was Silent Night Bloody Night (1972), the very first of the seventies body-count slashers. Made in 1972 but, due to good sense, not released until two years later, Silent Night Bloody Night is directed by Ted Gershuny and stars Patrick O’Neal and my old friends Mary Woronov and John Carradine. Is it a worthy stocking stuffer, or is it nutty enough to be roasted on an open fire? Silent Night Bloody Night is actually a rather engaging body-count movie that’s ahead of its time. The similarities to Black Christmas are definitely there, from the mysterious phone calls, the Christmas setting, point-of-view shots and general stalk-and-slash mayhem.

Writer-director Ted Gershuny – who wrote six episodes of the television show Tales From The Darkside and two episodes of Monsters – dips his lid to classics like Psycho (1960) and The Old Dark House (1932), while looking forward to the splatter films of the late seventies and eighties, which makes Silent Night Bloody Night something of a turning point in the genre, and even establishes some of the rules quoted in the recent Scream (1996) films:

Admittedly, the connection to Christmas is pretty thin. The guy who sets fire to himself at the beginning of the film returns home on Christmas Eve, and one character sings ‘Silent Night’. That’s it. No killer Santa or Santa killings, in fact there’s absolutely no Santa to be found in this film at all! Speaking of which, this film is not to be confused with the similarly-titled slasher film Silent Night Deadly Night (1983), which may have been deadlier, but this week’s film is far bloodier. 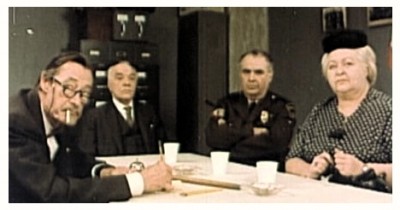 Many of the film’s cast members were from Andy Warhol’s ‘Factory’ including Ondine, Candy Darling, Kristen Steen, Tally Brown, Lewis Love, Jack Smith and Susan Rothenberg. Mary Woronov, who plays Diane, was also a member of Warhol’s entourage, starred in a few of his underground films, and was a go-go dancer in the Velvet Underground Exploding Plastic Inevitable shows. She then married director Ted Gershuny and appeared in three of his films: Kemek (1970), Sugar Cookies (1973), and this week’s epic, Silent Night Bloody Night, which only goes to show that sleeping your way to the top may not always work out.

Mary’s most famous appearances include the Roger Corman films Death Race 2000 (1975), Rock’n’Roll High School (1979) and its sequel Rock’n’Roll High School Forever (1991), but her real breakthrough role was in the cult film Eating Raoul (1982) opposite Paul Bartel, in which they chow down on Chakotay from Star Trek: Voyager. She’s since had roles in numerous films including Blood Theatre (1984), Night Of The Comet (1984), Chopping Mall (1986), Nomads (1986), Scenes From The Class Struggle In Beverly Hills (1989), Dick Tracy (1990), Where Sleeping Dogs Lie (1991), Looney Tunes Back In Action (2003) and, most recently, All About Evil (2010), with my old girlfriend Cassandra Petersen, aka Elvira Mistress Of The Bark. Mary also made guest appearances in television shows like Logan’s Run, Highlander, Babylon Five, Amazing Stories, St. Elsewhere, Charlie’s Angels, Murder She Wrote, Wings, Family Matters, Buck Rogers In The 25th Century, Parker Lewis Can’t Lose, and Mister Belvedere – I’ll have to slap her in the face for that last one next time I see her.

Patrick O’Neal, who plays John Carter – not the one from Mars – was mostly seen in guest roles on television, beginning in the fifties, and always reminded me of a poor man’s Peter Lawford. In the early sixties he received critical praise for his leading role on stage in the Tennessee Williams play The Night Of The Iguana, and the attention earned Patrick lots of film roles, but they were all rather boring. He was usually cast in action adventures like King Rat (1965) and Assignment To Kill (1968), or in gruesome yarns like Chamber Of Horrors (1966), which is probably his best known film, but not because of him. Chamber Of Horrors was notable for using what they called The Fear Flasher and The Horror Horn to alert viewers to nasty moments in the film. Although made for television, the film was released theatrically because it was considered too intense. These ridiculous and extremely annoying gimmicks were added simply to increase the running time of the film.

James Patterson won a Tony Award for his role in the Harold Pinter play The Birthday Party, although you wouldn’t be able to tell from his performance as Jeffrey tonight. It’s not entirely his fault though – unfortunately James passed away from cancer complicated by extreme embarrassment immediately after shooting Silent Night Bloody Night, so somebody else had to dub his dialogue. Some actors will do anything to get out of a contract. 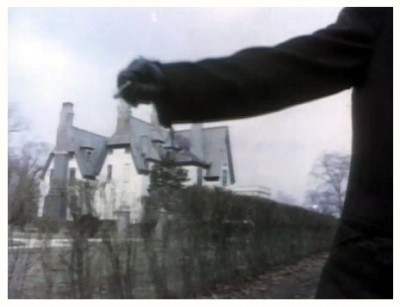 I was about to go off on another tangent, wasn’t I? Let’s get back to Silent Night Bloody Night before I give you my entire life story. Hmm? Well, I was born at a very young age and, as I got older, I got bigger! I know, amazing… 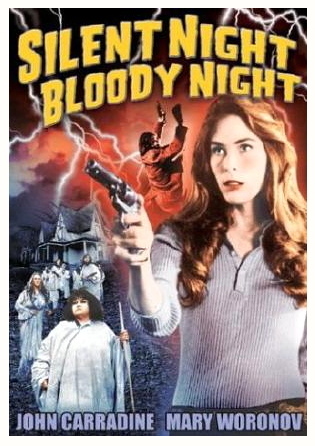 Anyway, we have a rather gruesome climax for an even more gruesome film – we even get a Doctor-Cam view of the broken glass being placed over his eye, right before it…well, suffice to say he won’t be wasting any more money on overblown 3-D films. I dare say you’ll think more than once that this is a poor quality print in urgent need of restoration. Well, it’s happened! I’ve heard excellent reports of a recent restoration that enhances the viewer’s enjoyment – presumably by painting each frame black. Alas, that print is not in the Public Domain, so I had to discuss this moth-eaten strip of celluloid instead. It’s one of the pitfalls involved in venturing into the Public Domain. Tune in to see what terrifying traps await us next week in…Horror News! Toodles!