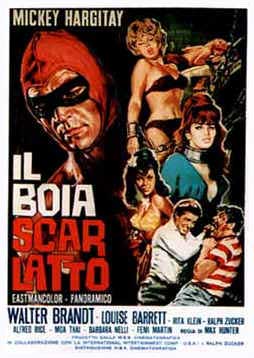 SYNOPSIS:
“A photographer and his models go to an old, abandoned castle to shoot some sexy covers for horror novels. Unbeknown to them, the castle is inhabited by a lunatic who believes himself to be the reincarnated spirit of a 17th-century executioner whose job it is to protect the castle against intruders.” (courtesy IMDB)

REVIEW:
He was a homicidal maniac who lived to kill, they were a bunch of actors who wander into the castle to take photographs of lovely girls draped in blood and guts, and I…I am Nigel Honeybone and this is Horror News. “My Vengeance Needs Blood!” You know you’re in for a special treat when a movie starts with a quote from the Marquis De Sade. Bloody Pit Of Horror (1965) begins with a flashback of a red-hooded criminal being strapped into one of his own iron maidens, or rather a cardboard maiden which looks like it was constructed for a school play. Then his body and soul are locked up inside a coffin-shaped painted plywood prop, complete with a really cool wax seal. What I love about these wax seals is that they last for hundreds of years, but instantly fall apart as soon as some clumsy photographer brushes against it.

Mickey Hargitay, who plays Travis Anderson aka The Crimson Executioner, was Mister Universe in 1955 and later starred in Hercules Versus The Hydra (1960), but the most impressive item on his resume is that he was once the husband of busty Jayne Mansfield, and is father to Mariska Hargitay of Law And Order fame. If you ask me, I think she inherited the wrong features from both parents. Mickey even appeared in an episode of Law And Order with Mariska as her Grandfather. That’s pretty funny. He puts all that vital life experience to use in Bloody Pit Of Horror, running around shirtless in red tights, torturing and killing a few folks who only wanted to use his castle to take some cheesecake photos for a horror anthology they were working on. You may laugh, but this sort of thing happens to me all the time. Of course, there was another Mister Universe that went on to play executioners and Hercules. I speak of none other than the Governator himself Arnold Schwarzenegger who, by a staggering coincidence and a masterstroke of casting, played Mickey Hargitay in the television movie The Jayne Mansfield Story (1980). Talk about typecasting! 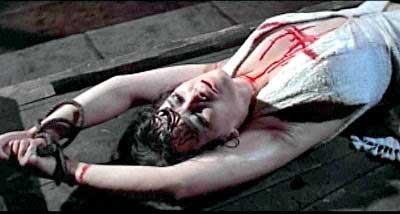 As you watch this, you may be struck with a sense of deja vu. Made in 1965, Bloody Pit Of Horror is remarkably similar to The Playgirls And The Vampire (1960), in which a bus-load of babes staying at a mysterious castle get killed off one-by-one by the crabby Count who owns the castle. For the anal-retentive among us (and that means you), actor Walter Brandi, who played the Count in The Playgirls And The Vampire, also plays Rick in Bloody Pit Of Horror, and as you may have guessed by his mono-syllabic name, Rick is the hero. Villains are called Richard, and comedy relief is Dick, in more ways than one. So, if you’ve already seen The Playgirls And The Vampire, good for you. Is there really any reason to see this one? You bet!

Mister Mansfield acts about as well as you would expect from someone whose film career highlights include Lady Frankenstein (1971) and Revenge Of The Gladiators (1964), but his role in Bloody Pit Of Horror doesn’t call for anything approaching subtlety. If you’re going to prance around like an over-ripe phantom making faces at people, and command a posse of muscle-bound henchmen in form-fitting striped shirts, it’s okay if you camp it up a bit. It’s probably compulsory. It’s hard to be a quietly tortured monster that hides in the shadows and strikes a pose when no one is looking. Especially when Crimson Executioners had such awesome muscle-tone and definition – which you can have too, if you purchase my new book In Just Seven Days I Can Make You A Skeleton, the sequel to my best-seller Piranha Yourself Thin. 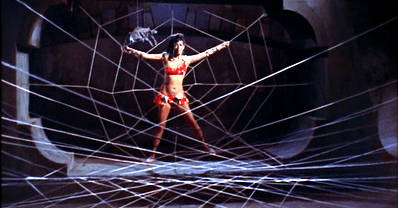 After being told that the dungeons are strictly off-limits, surprise surprise, the girls and their handlers go down to the basement to set up the photo shoot. This involves a montage of the girls getting into their skimpy attire, risque at the time, but rather over-dressed for a rave today. They still call them raves, don’t they? Um, hootenanny? Shindig? Nothing you wouldn’t see on a suburban school girl today, anyway.

While some of the guys are running around down in the squidgy bowels of the castle, they bump into the seal that has held the Crimson Executioner in his tomb, it drops off and the next thing you know there’s an accident at the Pit And The Pendulum attraction. If I ever found myself in such a situation, I’m quite certain I’d take that as a cue to drop whatever it was I was doing, call an ambulance and then get the hell out of the castle. Good thing I’m not a character in an Italian horror movie. Well, not a major character, anyway. Keep an eye out for my cameo appearance. 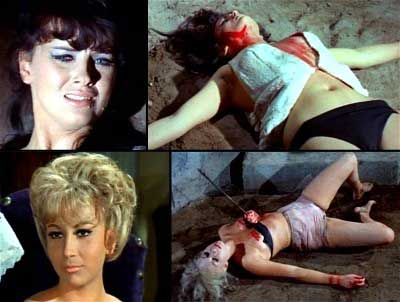 I couldn’t help but like Travis with his self-obsession and preening, all the while complaining about the half-naked nubiles laying around his basement posing for their cheesecake horror photos. Unlike a lot of movie maniacs, he doesn’t kill women because he’s not good enough for them, but because they aren’t as great as he is! He also kills men for the same reason, so don’t worry, he’s an equal opportunity maniac. How the d*ckens did Mickey Hargitay end up in a castle with all those nifty torture devices, anyway? How can I get some? And how did I get talked into a supporting role and not get any credit? Again! All these questions and more will be ignored until next we meet in…Horror News! Toodles!