“In 1906, in China, Professor Alexander Saxton discovers an ancient frozen fossil in the remote Province of Szechuan. He brings the remains of the being in a box to Shanghai and boards a trans-Siberian train, where he meets his acquaintance Doctor Wells. During the trip, a life force trapped in the frozen creature is released, killing and stealing the memories of the passengers.” (courtesy IMDB)

Can you imagine what you’d get if you crossed Murder On The Orient Express (1974) with The Thing From Another World (1951)? No, not Thing From The Orient – I think that was a Godzilla film – the answer you seek is the subject of this week’s review, Horror Express (1972), starring the ever-dependable Peter Cushing, the always-sinister Christopher Lee and the totally-bald Telly Savalas. Yes, he did have hair once upon a time. I think it was 1962, before he sold it to William Shatner for an undisclosed sum. No more questions – you’re putting me off. Now where was I… 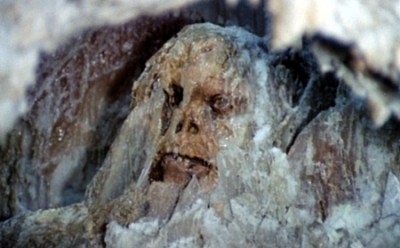 Ah-ha! Horror Express, also known as Panic On The Trans-Siberian Train. My old sparring partner Chris Lee discovers a frozen Missing Link and brings it back to Europe aboard the Trans-Siberian express. Unfortunately, the monster thaws out to find himself classified as baggage, which only makes him very, very angry. Most horrifying of all, no-one – and I mean absolutely no-one – gets a refund on their return ticket! I know, it’s quite shocking, but that’s why Horror News is restricted to mature readers like you and I. Prepare to be amazed by two of Britain’s greatest actors, Peter Cushing and Christopher Lee – and some bald-headed bastard – in Horror Express, one of the best Hammer horror films not actually produced by Hammer. It’s also one of the first feature films to be inspired by a toy train set. I’ll explain. 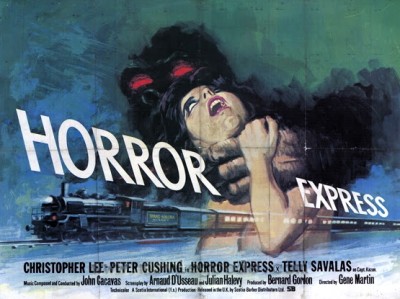 Nicholas And Alexandra (1971) was a gigantic Russian epic produced by Columbia Pictures. In order to recoup costs they sold off many costumes and props, including the model of the Trans-Siberian Express seen briefly in the film. The model was purchased by screenwriter Bernie Gordon, who quickly constructed not one but two full-length films featuring the miniature train: Pancho Villa (1972) and Horror Express. In order to add value to his productions, he insisted the model was built from scratch for both movies, a practice adopted by movie marketing maestro Roger Corman in the eighties. 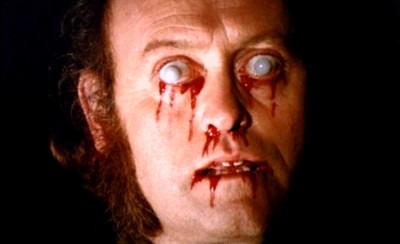 The total budget assigned to Horror Express was a mere US$300,000, forcing Bernie to cut corners where he could. For instance, he filmed it in Madrid, mostly without sound, and dubbed the voices and effects in later. Furthermore, he only had one interior train carriage set, so all of the scenes for each carriage had to be shot at once, then the set would be redressed as the next carriage. Highlights – or should I say lowlights – of Bernie’s screenwriting career include Ray Harryhausen’s worst film Earth Versus The Flying Saucers (1956), the abortive adaptation of John Wyndham’s Day Of The Triffids (1962), and the most geographically embarrassing title in the history of Hollywood: Krakatoa East Of Java (1969). 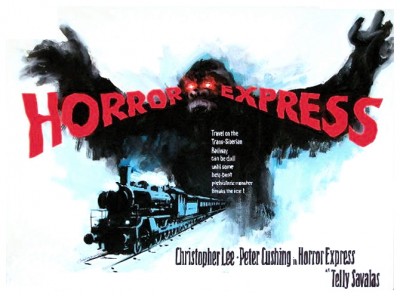 Krakatoa is, in fact, west of Java. While the film was in production, the producers became aware of Bernie’s mistake but used it anyway, believing it was a more exotic title than Krakatoa West Of Java – morons. But I digress. Horror Express pits Peter Cushing against Christopher Lee as rival scientists aboard the Trans-Siberian Express. This happens to me all the time – just last week I saw two microbiologists duking out on the bus – but I digress. 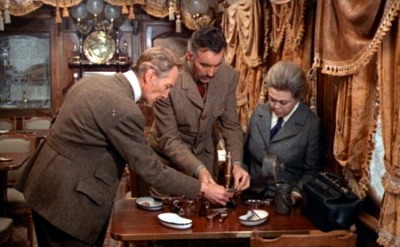 The late great Peter Cushing was known for his many roles in Hammer Horror Films playing either Doctor Frankenstein or vampire hunter Van Helsing, often appearing opposite Chris Lee or yours truly. Pete’s most famous non-Hammer roles include the drug-addled Sherlock Holmes, the power-hungry Grand Moff Tarkin, and the movie version of Doctor Who (1965), which has created friction between die-hard fans for almost half a century! I met Chris Lee about the same time, when he became famous for his role as Count Dracula opposite Pete. Other villainous roles include Lord Summerisle in The Wicker Man (1973), Scaramanga in The Man With The Superfluous Nipple (1974), Saruman in The Lord Of The Rings (2001) trilogy, and Count Dooku in the Star Wars (2002) prequel trilogy – am I allowed to say Dooku on the internet? They probably say it on The Fucking Sopranos all the time. 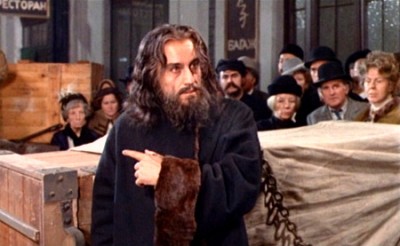 There was some controversy recently when Chris became the Guinness book world record holder for most film roles ever – 269 since 1948. I was quick to send a strong letter to the Guinness people pointing out that my old friend John Carradine appeared in no less than 340 films from 1930 to 1990 but, instead of stripping Chris of his award, he was knighted, received a BAFTA Fellowship and his own action figure! No one’s ever made an action figure of me – what a crime! 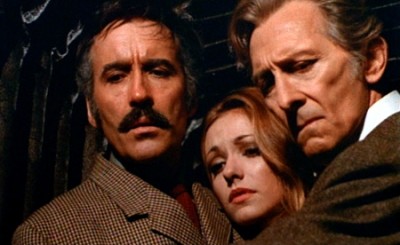 Speaking of crime, Telly Savalas is best known for playing television cop Kojak in the seventies but he was already a well-established actor by the time he was hit crossing the tracks by Horror Express. After Telly was nominated for Best Supporting Actor Oscar for his role in Birdman Of Alcatraz (1962), he appeared in The Young Savages (1961), The Greatest Story Ever Told (1965), Battle Of The Bulge (1965), The Dirty Dozen (1967), The Scalphunters (1968), Kelly’s Heroes (1970), Pretty Maids All In A Row (1971), and On Her Majesty’s Secret Service (1969), in which he misses George Lazenby and shoots Emma Peel instead – moron.

I know, I’ve strayed from the subject at hand. Let’s get back to Horror Express before I get sidetracked again – get it? Sidetracked? Suit yourself. One thing I’ve learned from horror films is nothing good ever comes of anything discovered in the arctic climates. How many films are based on the idea of reawakening something that’s been frozen for thousands of years? “Ooh, look! We’ve defrosted a unicorn that farts rainbows!” Never happens! You’d think people would have learned by now!

Horror Express is a hugely enjoyable romp that never really lets up. You’ve got a alien mind parasite, some truly nasty special effects and, just when you thought it couldn’t get any better, an absolutely barking-mad last half-hour which involves a lot more death and some serious zombie action. There are some really good ideas and a nice haunting theme song to boot – as far as I’m concerned, Horror Express has certainly earned its status as a cult classic. And it’s on that rather upbeat note I’ll ask you to please join me next week when I have the opportunity to punch your ticket for another terrifying train trip through the perilous Public Domain. Last stop – Horror News! Toodles!