SYNOPSIS:
“Eccentric millionaire Fredrick Loren and his fourth wife, Annabelle, have invited five people to the house on Haunted Hill for a ‘Haunted House’ party. Whoever will stay in the house for one night will earn ten thousand dollars each. As the night progresses, all the guests are trapped inside the house with ghosts, murderers, and other terrors.” (courtesy IMDB)

REVIEW:
This week I’m discussing one of my favourite films of all time, as I got to play an important role in the climax. Considered one of the best by one of the few auteurs of the fright film, William Castle, starring your friend and especially mine, Vincent Price, I present this week’s tale of terror, House On Haunted Hill (1959). But I must warn you, House On Haunted Hill is the only film to be made with the quaint cinematic process known as Emergo. Now, Emergo was an early prototype of a truly holographic 3-D movie process that wouldn’t require the audience to wear silly glasses. Emergo was a simple motion path generator consisting basically of a skeleton on a wire. There’s a point in the film when the skeleton would be pushed out from the top of the screen along a wire above the heads of the audience. They stopped it when kids kept shooting at the skeleton with BB guns and, in some neighbourhoods, Uzis. 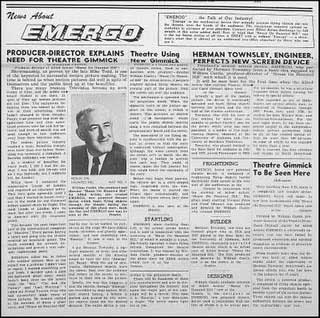 Castle wanted me to tour with the film, but that was during one of my busy periods. I was doing a season of Hamlet with John Gielgud at the time so, fortunately as it turns out, I declined. So the film was circulated with an Emergo Installation Manual suggesting that exhibitors ‘boil’ local policemen to provide my replacement. William Castle, the director and producer of House On Haunted Hill was known as The King Of The Gimmicks. For example, his first film Macabre offered a thousand-dollar life insurance policy for anyone who died of fright during the film. There were also nurses on hand to help the patrons if any of them required a happy ending, if you know what I mean, and I think you do. 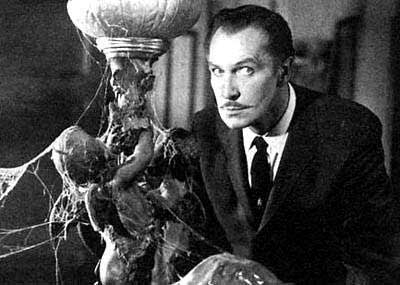 His other collaboration with Vincent Price, The Tingler (1959), had some of the cinema seats mined with joy buzzers to encourage the patrons to scream-off the titular Tingler when the creature escapes from the movie screen and into the cinema. Even worse, Homicidal (1961) had a Fright Break, a forty-five second warning to give cowardly patrons a chance to escape to the lobby before the climax of the film where, if they wanted a refund of their ticket, had to stand in Cowards Corner. While in Cowards Corner they had to sign a document admitting they were a bona-fide coward, in line with recommended United States Government Interrogation Guidelines. You think I’m joking, don’t you? 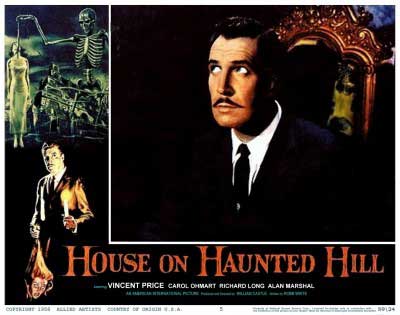 Okay, that’s enough about Castle, what about the stars of House On Haunted Hill? Let’s start with Vincent Price. This is one of his best performances, I think. He’s both hospitable and sinister. This is one of the best things he’s done, along with that divine salmon mousse that I used to smear on myself at his dinner parties. Vincent should also be remembered for his versatility. After all, he was the only actor who could go from playing a romantic rival in the noir Laura (1944) and Leave Her To Heaven (1945) to, um, well, Doctor Goldfoot in Doctor Goldfoot And The Girl Bombs (1966). It wasn’t just the girls that bombed. 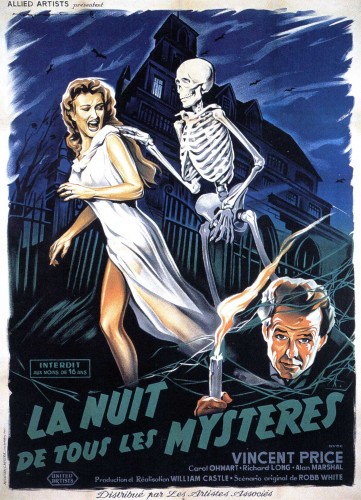 The hero may look familiar, he’s played by Richard Long. He was the Professor in the Mary Poppins (1964) television knock-off Nanny And The Professor. The other star of the show, Juliet Mills, went on to play the evil Tabitha in Passions. Apparently she was Samantha Stevens daughter gone to the Dark Side…I’m talking about soap operas.

The screamer is Carolyn Craig, a television actress who died of a gunshot wound, possibly self-inflicted, but look, her performance isn’t that bad, surely. Julie Mitchum, who plays Ruth Bridgers, is the sister of actor Robert Mitchum, and that’s about the closest she ever got to fame. The paranoid alcoholic is played by Elisha Cook Junior, who had been a paranoid alcoholic in The Maltese Falcon (1941), Shane (1953), and National Lampoon’s Movie Madness (1982). Carol Ohmart, Vincent’s wife Annabelle, wound-up in one of the classic cult movies, Spider Baby, Or The Maddest Story Ever Told (1968), and Doctor David Trent is played by Alan Marshal. He was born in Sydney and died on stage with Mae West during a production of Sextet, like a true Aussie. 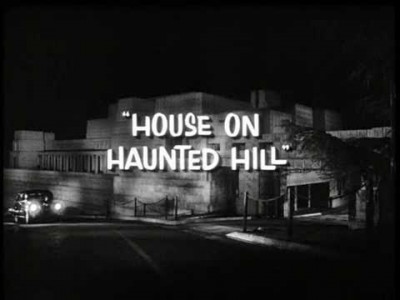 But the participant (apart from Vincent) that has appeared in the most prestigious films is the house itself, at least the exterior. It’s Ennis House in Los Angeles. Designed by Frank Lloyd Wright, it has been used in The Day Of The Locust (1975), Blade Runner (1982), Cast A Deadly Spell II: Witch Hunt (1994), and Buffy The Vampire Slayer (1992). 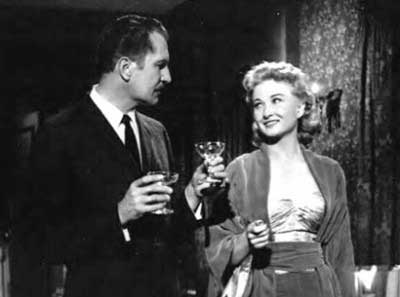 Maybe you should think of House On Haunted Hill as a prototype for reality television’s Big Brother, but don’t let that put you off. This was the film I worked closest with Vincent. He liked my way of hitting my mark every time, not that difficult when you’re all strung-up. Admittedly, when I signed the contract, I didn’t see the Nudity Clause, so Castle promised it would be a closed set. After the shoot Vincent and I would go into town together, I’d order a bottle of absinthe and a mop…

Anyway, please join me next week when I have another opportunity to make your stomach turn and your flesh crawl with another lusting, slashing, ripping flesh-hungry, blood-mad massacre from the back side of Hollywood for…Horror News! Toodles!