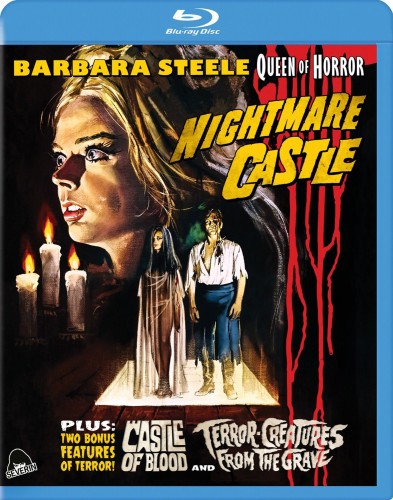 “A sadistic count tortures and murders his unfaithful wife and her lover, then removes their hearts from their bodies. Years later, the count remarries and the new wife experiences nightmares and hauntings. The ghosts of the slain return to exact their bloody revenge, until their hearts are destroyed.” (courtesy IMDB)

This week, for complicity in crimes against good taste, I sentence you, good reader, to ninety minutes trapped in Nightmare Castle (1965)! A mad scientist, adultery, ghosts, strange experiments, a dead butler in the bathtub, and a spooky castle. Exciting? You’d think so… 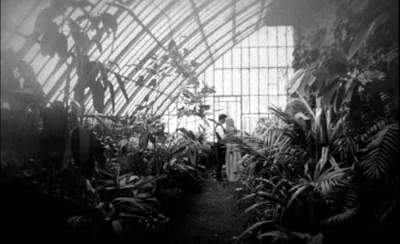 Fear will grip your spine when you come to the sick realisation that you’re about to sit through another one of those drive-my-crazy-wife-crazy-so-I-can-get-her-money movies. Console yourself with the fact that Barbara Steele is playing dual roles in this one. Ahhh, Barbara Steele…ahem. Excuse me. Anyway, lots of those Italian horror fans who worry about stuff like finding these movies, well, they think she’s ‘da bomb’. Kids still say that, right? I’m all about watching bombs, so pop the top off another bottle of Absinthe, pack your pipe, and prepare for the worst, as we visit Nightmare Castle! 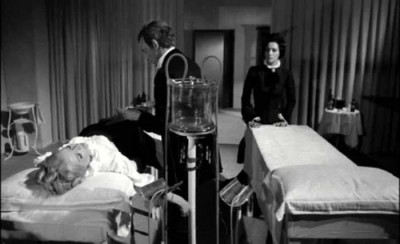 Nightmare Castle is shot in black-and-white, always the best choice for a ghost story, even better when you can’t afford colour. While writer/director Mario Caiano doesn’t have Mario Bava’s eye for light and shadow, he nonetheless manages to create a real feeling of decay. Hampton Castle itself is not the crumbling ruin we might expect, it’s actually a richly appointed mansion, with tapestries and ornate woodwork. It doesn’t look like a set on a soundstage. It looks like a real castle, and very likely a haunted one, though not by anybody I know, as far as I recall… 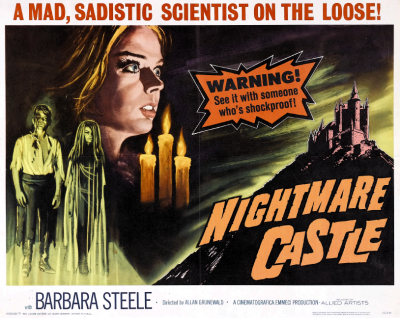 The cast is better than the movie would have you believe, with Paul Muller chillingly evil in the role of Stephen. Muller was featured in many other horror films over his career, including several for Jess Franco: he was the Hanging Father in A Virgin Among the Living Dead (1973), and Doctor Seward in Count Dracula (1970). More recently he had a cameo as the leader of the Black Monks in Umberto Lenzi’s Hell’s Gate (1989). Still, this early role remains one of his most effective. 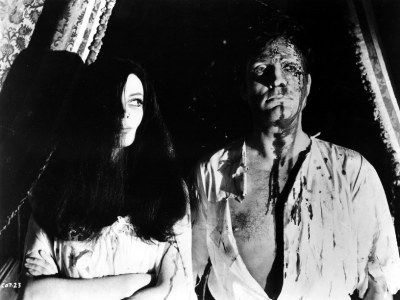 Barbara Steele is Barbara Steele, for better or worse. She is probably better remembered for the inspiration she provided to Italian filmmakers than for her actual talents as an actress. In this she dubs her own voice (for a change) which wasn’t much of a challenge since half of her lines were the word ‘no’. This wasn’t the first dual role for Barbara. Her first starring role was as Asa/Katja in Mario Bava’s Black Sunday (1960), and in many of her other films she played ambiguously dualistic characters, if not actually two entirely separate roles. In Nightmare Castle she’s divided into the Arrowsmith sisters, brunette Muriel and blonde Jenny.

Hammer Films may have had the budget to afford real twins for Twins Of Evil (1971), but they wouldn’t be able to act their way out of a wet negligee. Barbara Steele, on the other hand, would win hands down against both of them, with one breast tied behind her back, no doubt – ooow! Also Barbara’s two roles as Muriel and Jenny are a bit less straightforward than the good girl/bad girl dichotomy of her characters in Black Sunday. Muriel isn’t actually evil. She may be a super-bitch that goes after anything in trousers, yes, both selfish and cruel; but her desire for revenge against such a vile man as Stephen is understandable. As for Jenny, she may be the light-haired, therefore ‘good’ sister, but she’s hardly a stereotypical heroine. She’s a frail, spiritless creature with a history of mental illness, who is hardly a match for the grasping soul of Muriel.

Helga Line‘s coldly beautiful presence is ideal for Solange. When she speaks of the stolen blood running cold and heavy through her body, it’s a chilling moment. Solange’s old-woman makeup is grotesque, but it’s grotesque in an Eraserhead (1977) kind of way. Whether or not this was an appropriate effect for a film like Nightmare Castle is debatable, but Helga carries it off very well. Beneath the unbelievable layers of crust on her face, you can still see Helga’s suspicious eyes remain active, darting back and forth.

Lawrence Clift is quite bland and uninteresting as the nominal hero Doctor Derek Joyce, a role that practically requires him to be bland and uninteresting. Inertia at its finest, and a career to match with this being his only credited screen appearance. The only real disappointment in the cast is Rik Battaglia as David, if only because he fails to be truly menacing when he comes back from the dead. Perhaps it’s because his costume has been shredded a little too neatly, it has more of the Wardrobe Department than the grave about it. Or perhaps it’s because his pants are pulled a little too high over his waist, making him look like a portly, middle aged zombie instead of a lean, hungry one. 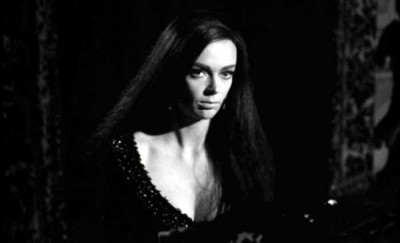 Best of all is Ennio Morricone‘s monumental Fugue in E-flat Minor for Organ, which dominates the score. Fugues are based on a central theme or subject, which is played on its own at the very beginning of the piece. After that, a second voice or instrument enters playing the theme in a different key. This is called the Answer, and because it’s in a different key, it’s often a variation on the theme rather than a literal restatement. While the Answer is playing, the original voice or instrument plays a second, contrasting theme in counterpoint with it. Gradually more voices enter in a similar fashion, until as many as four, five or six different lines are playing with the themes at the same time. And that’s just the beginning, which is called the Exposition. My point is, it takes a great deal of skill for a composer to write a successful fugue, and Ennio Morricone does an admirable job. 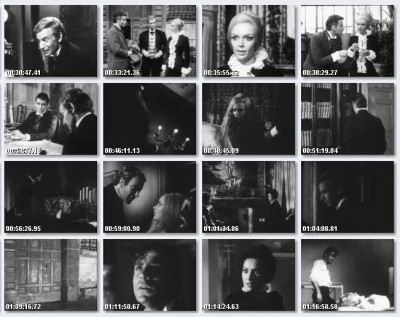 The script, on the other hand, is a total write-off. Now, I’m not complaining about the plot, although I very easily could. No, it’s the English language dialogue that pushes me over the edge. Clearly, it was written by someone who’d never had a conversation. There are moments, particularly when Stephen is pontificating, when you just want to throw up your hands and tell them all to just shut up! And keep an eye out for my cameo during the finale. They flew me all the way to Italy for a split-second cutaway of me in drag, but it was worth all the ravioli I could eat. Perhaps the finale would have packed a better punch if there had been a more obvious love-hate relationship between Stephen and Muriel, instead of the hate-hate relationship they display. And don’t get me started on the butler! Where did he come from, anyway? It’s almost as if someone left a window open and he just fluttered in, attracted by the light.

Nightmare Castle is a movie that tried it all, and failed at almost every point. The various plot devices seemed ill-conceived, boring, or just didn’t make any sense. Perhaps the worst part of all this was Doctor Arrowsmith and his girlfriend. The doctor never seemed to really care one way or another about any of these events, frying the itinerant butler simply elicited one of those shoulder shrugging looks and it seemed like he wanted to get rid of his new wife in the most convoluted way possible. Inviting a completely impartial psychiatrist to stay was a masterstroke of ineptitude. Then you had some ghosts milling around periodically, but not as much as you would expect from a pair of vengeful departed spirits. I didn’t quite understand the relationship that the doctor and his girlfriend had, either. Why were they together? What exactly was her problem with needing blood to stop her aging, and why didn’t she use something more conventional? So please join me next week when I have the opportunity to scoop out your brain and drop it in a bucket with another spine-tingling journey to the dark side of…Horror News! Toodles!

Nightmare Castle (1965) is now available on bluray per Severin Films