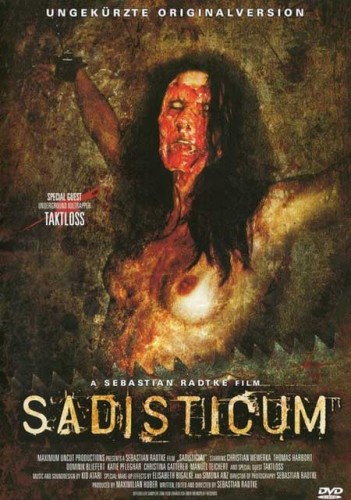 Sadisticum tells the story of a man, for it seems to be only one mission in life, the torture and killing of his fellow men. At the age of 17, he has already killed two people. Then he succeeded to prevent his appetite for many years. He spent half of his life to work with the company and externally adjust. But the emptiness in his life increased steadily, until it happened one day, he kills. He would not stop, this time he would let his instincts run free only this time

If you were to take the disenfranchised white dude feel of Fight Club and combine it with the “torture P*rn” of movies like Saw and Hostel, then remove all big name actors as well as the budget, what you’d end up with would look a lot like Sadisticum. Written and directed by Sebastian Radtke (if you’ve been following along at home, you may recognize that name as the writer/director of the surprisingly original Psychotica), this little German horror film weighs in at less than one hour running time but packs quite a punch on the gore scale.

Radtke’s most recent (as far as I can tell) film tells the story of a man (who remains unnamed throughout) who listens to his heart and follows where it leads him. And where that leads him is to become a lecturer on torturing. A regular Tony Robbins of pain, if you will. But now we’re getting ahead of ourselves, so let me backtrack. 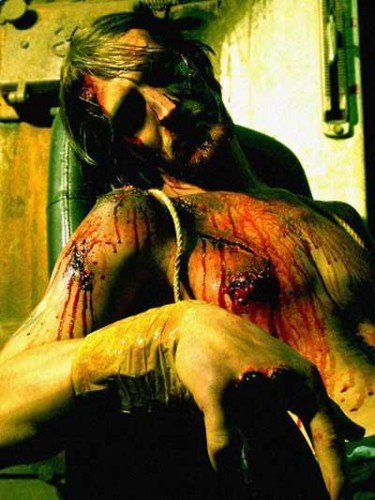 Sadisticum opens similarly to the afore-mentioned David Fincher/Chuck Palahniuk collaboration, giving the viewer a sneak peek of what is to come near the end before showing us how we get there. Then we get to the story, narrated by the protagonist, and beginning with a flashback. An irritated young boy answers a knock on the door and finds an attractive girl, a classmate of his, standing there. She needs a signature on her assignment. When her pen doesn’t work, he goes to find one that does, and the girl takes her cue to follow him into his room. She tells him she thinks he is cute, which makes him smile, and then begins kissing him. Then she insults him, and he beats her bloody and unconscious, then has sex with her. He panics, knowing she will go to the police, so he kills her in a barn. The next day, when he feels absolutely no guilt, he realizes that he is happy. 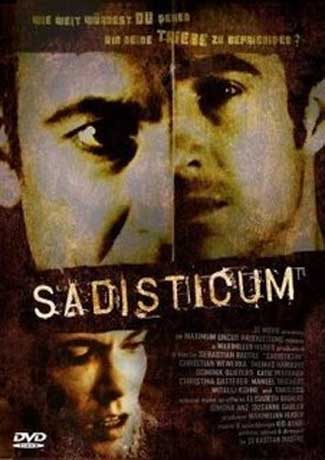 Fast forward to present day. It is 30 years later, and the man (Christian Wewerka) is walking home from work. A random stranger on the street (played by German rap artist Taktloss) asks for a cigarette, then robs the man at gun point. During the robbery, we are given a flashback to when the man, as a small boy, was beaten by a bully, then urinated on. When a random passerby offers to help him and starts picking up his things, a switch is flipped, and our protagonist pummels him with a brick, just as in the flashback he pummels. He remembers the excitement, the good feelings he had when killing before, and decides to no longer hold himself back. In fact, he wants to find others like him. So, after combing the internet for like-minded people, he starts his own training seminars, where “students” can come to learn about pain, torture, and efficiency.

What Sadisticum lacks in running time it makes up for in torture and brutality. Fingers are broken, then chiseled and chopped off, fingernails are pried off with a screwdriver, flesh is sliced, broken, and burned. And while the budget is low, the effects are very well done, something we’ve seen before in Radtke’s work.

Unfortunately, outside of the visual treats of blood and gore, this film is a difficult one to watch unless you know German. The subtitles are a complete disaster throughout. They are very small, and the font chosen almost looks naturally blurry. At times, they blend in with the background for their entire duration, leaving us guessing as to what they may have said. About nine minutes in, one line remains on the screen for close to two minutes while other dialogue continues without us non-German speakers. And even if all of these issues were cleared up, this is one of the worst translating jobs I’ve ever seen with subtitles. Some sentences are so grammatically bad that you really aren’t sure what the people are saying.

Most of the short movie goes back and forth between the main guy torturing people in front of a crowd and the life of Steven, the police officer (Thomas Harbort) investigating the crime scenes, and his wife Alina (played by Katie Pfleghar, who, according to her bio, was named “Sexiest Female Vegetarian” of 2008, though I’m not sure who by). There is a strange scene, almost reminiscent of something out of Nekromantik, where the main character is torturing a woman with an electric sander, and every now and then it cuts to a flashback of a small child playing “Twinkle, Twinkle, Little Star” on a xylophone, which is definitely the “creepy” part of the film for me. The ending is interesting and somewhat unexpected, something that comes a bit out of left field but makes enough sense and fits the story where the viewer won’t throw their television in disgust.

Sadisticum is a fairly straight forward horror film that relies heavily on visual shocks for much of its duration. Not to say it is bad by any means, it’s not. But don’t expect anything groundbreaking. It’s more quality work from a very low budget, independent film maker, something that deserves to be applauded every time.