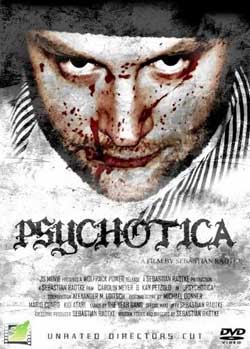 A fanatic medical student has developed a serum that causes extremely realistic visions. When a young woman who is a subject of his, begins taking the serum, she has terrifying visions of her own death.

A girl wakes up in what looks like one of Dexter’s kill rooms. The walls and floor are wrapped in plastic, she is covered in blood, and her guts have been ripped out and are precariously sitting against her stomach. As she attempts to get her bearings, someone comes up behind her and covers her face in plastic. We watch her take her last breath as she suffocates and eventually dies. Then she suddenly wakes up, strapped into a wheelchair with nodules attached to her head and a doctor sitting near her, typing away. This is how German director Sebastian Radtke’s very low budget, yet somewhat impressive, shot on video thriller Psychotica starts.

How do you keep a budget extremely low when making a movie? One way would be to work with a cast of just three actors, one of whom is the director playing a corpse. Okay, but then how do you make a slasher style horror movie with a working cast of two? Simple, just kill the same person over and over. Which is exactly what Radtke does. And somehow, for the most part, he makes it work.

The storyline of Psychotica is simple: a young woman (a character not given a name, but played by Carolin Meyer) has been kidnapped and is now being used in an experiment. The doctor who kidnapped her (played by Kay Petzold) tells her that he will give her a serum that causes hallucinations of her own death, which he is able to watch via computer monitor, and after all is said and done, she must pick one of them as her means of death. For some reason, when the doctor talks, his mouth never moves, and his voice sounds very reminiscent of Laubsage (which is, of course, German for Jigsaw). 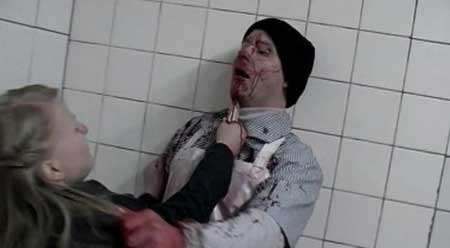 For much of the rest of the movie, we watch as this poor young woman is murdered over and over again. Once, we see her in a forest running away from what looks like the Grim Reaper before finally getting caught and stabbed with his scythe. Another time, we see her sitting down to dinner with the doctor, as she realizes that the food on her plate is her own organs. She faints, only to wake up to her entire left arm being devoid of flesh or muscle and the doctor stabbing her. There is poisonous gas, drowning, and a very Saw-like trap on her mouth, among other brutal deaths she must mentally suffer through, every now and then waking up to still find herself trapped with the torturing doctor. 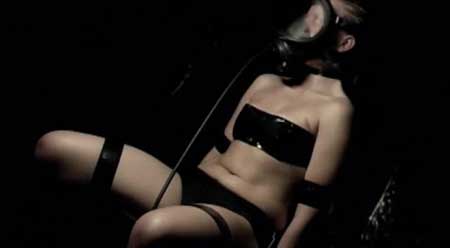 This whole movie could have easily failed very early on, yet it managed to hold on throughout. It is, of course, yet another in a long line of movies capitalizing on the success of blockbusters like Saw and Hostel, but let’s not forget that those movies are also heavily influenced by their predecessors too. Much of the exposition is delivered through the doctor simply relaying the back-story to his female victim in a very James Bond-villain kind of way. While this is unfortunate, it’s a better approach than simply filling time with what turn out to be fairly unnecessary details (when the doctor volunteers an explanation of why he’s doing this, he actually says he’s doing it for science).

There is very little dialogue in Psychotica, which works out just fine as much more would only serve to clutter the movie. The acting is pretty good throughout, specifically the conveyance of fear by the young woman who is almost constantly in a state of panicked confusion. Radtke does well with his bloody effects, not going all out gory with every kill, but instead keeping some of them subtle so as to make the others more brutal in comparison. He makes the best of his locations, with a variety of settings throughout making us forget this movie was made for somewhere around $6500. 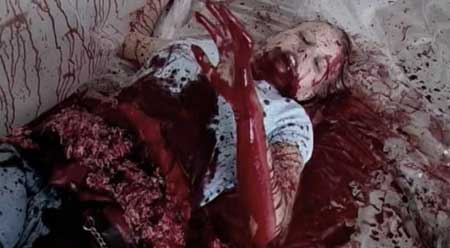 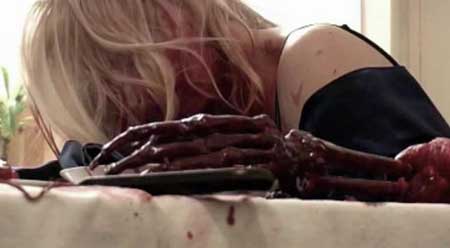 There is a good sense of tension throughout Psychotica, which is impressive since we know up front that we are about to watch the same girl die over and over. My one big complaint, however, has to do with the end. No spoilers will be given, because I still think the movie is worth watching, but I felt like the director had a couple interesting options that would have really set his movie apart from others, but then took the easy way out with a convoluted finale. I still recommend Psychotica, especially to beginners in film to show how much can be done with so little. I’ll just always add an asterisk to my praise. 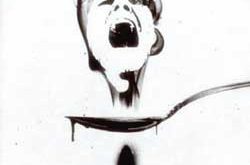