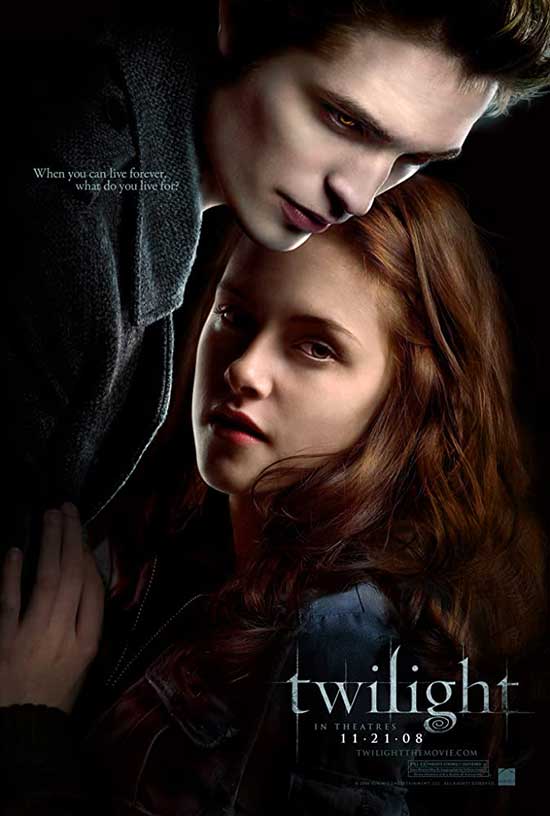 Based on Stephenie Meyer’s best-selling novel, Twilight follows the saga of Bella Swan (Kristen Stewart), who moves to a small town to live with her father. At school, she meets Edward Cullen (Robert Pattinson), a mysterious classmate who reveals himself to be a 108-year-old vampire. Despite his cautions, Bella falls in love with Edward, which endangers her life when a coven of bloodsuckers arrives to challenge Edward and his family.

Although hardcore fans of Stephanie Meyer were a bit nonplussed, to say the least, over this movie adaptation of her bestselling vampire novel, I thoroughly enjoyed it. I can imagine that I’m going to take a lot of flak for my opinion, especially as “Twilight” is a movie meant primarily for teenage girls, but I’m willing to take that risk since the story and chemistry between the leading actors is so beautifully done that, if you are willing to overlook some minor flaws, you can’t help but fall in love with this film too.

Yes, this film has flaws. Some of the camerawork early on is a bit amateur and some of the stunts are a bit cheesy but, even if this was to be judged by bad movie standards, it was still very entertaining. I really didn’t notice any major goofs though as the relationship between the incredibly strong leads of Kristen Stewart (as Bella) and Robert Pattinson (as Edward) really drew me into the fantasy in ways that only fans of something like “Buffy” or “Angel” could truly appreciate. Yes, this is all very much like a more serious and romantic version of the relationship between Buffy and Angel in the TV series but with a bit more of a “Romeo and Juliet” feel to it. “Star-crossed lovers” is, I believe, the correct expression for this situation.

Underlying the dominant love story though is also a subplot of good vampires against bad vampires and even the hint of werewolves on the horizon. With at least one sequel about to occur pretty soon, it’s obvious that as much was being packed into this film as possible to create hooks. It all worked too. There wasn’t too much given away but just enough to leave this as a stand alone movie while making the viewer wish there was more. A delicate balance has been achieved and this makes it such a commercial masterpiece that it has the potential to outsell “Harry Potter” now that the original audience of those books and films has grown up and moved on.

I’ll mention again that what really drew me in was the acting. The vampire actors are all beautiful rather than just attractive while the humans are shown to be a lot more unkempt and immature even though everyone looks about the same age. Kristen Stewart is the middle ground between these two polarities as she is beautiful yet not quite fully formed as a woman. Her performance was exceptional albeit with some moments of unrealistic dialogue. The character of Bella was just such a paradox that she had to stand out as an attraction for Edward the vampire. She was a lot more controlled and mature than any of her peers yet still awkward enough to be one of them at times too so her reactions were realistic even if her words were not.

At 122 minutes, “Twilight” is a long film which, due to slow pacing, feels even longer. For once though this isn’t a bad thing as if it had been trimmed then it could have ended up as just another MTV style teen flick. The added length adds some substance to things and allows the greater character development which will undoubtedly continue into the sequels.

Cinematically it is a beautiful film to watch. Only one rough piece of camerawork on the beach distracted me for a moment but everything else was framed perfectly and all the aerial shots, zooms and pans were done effectively. A baseball game used to show the speed and strength of the vampires was a moment of almost comic relief which didn’t really work out too well but at least it is possible to see what was intended. The director, Catherine Hardwicke (of “Lords of Dogtown” fame), still seems to be learning about what works and what doesn’t but, since no movie is ever perfect, the pros outweigh the cons especially considering the length.

The biggest problem with this film for horror fans, of course, is not the technical achievements or production values but that, like every other vampire film in recent years, it just isn’t scary. I can’t honestly remember a vampire film apart from certain scenes in “Salem’s Lot” ever being scary though. When a lot of Edward Cullen’s lines consist of the question, “Are you scared?”, it does tend to provoke the audience, in this case me, to say “No” instead of waiting for Bella’s equal response.

Really though, “Twilight” is more of a romantic drama with some action rather a real horror genre movie. The potential was never even there in the books, it seems, to make this into anything other than a kind of “Dark Shadows” for the 21st Century so you can’t honestly go into this expecting another “30 Days of Night” because it’s not going to happen.

There isn’t a lot of blood in this considering it is a vampire movie and any death scenes are pretty much off-camera. I imagine that this was done intentionally to keep it within the PG-13 rating more than anything else. For my tastes, it could have used some harder and more gritty bloodletting but the target audience should be more than satisfied with what is there.

I’ve rated “Twilight” as 8 out of 10 based mainly on its value as an entertaining movie. As a horror movie, it is only worth half that score. I still recommend that you watch it though.