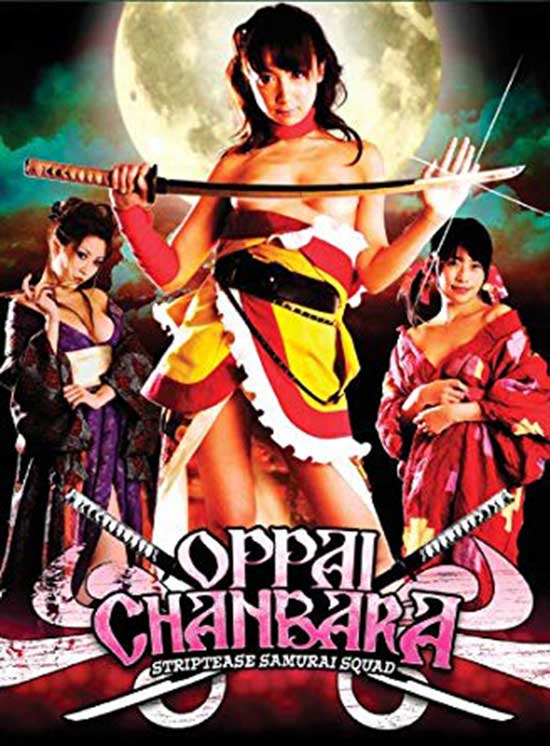 After the death of his mother, 20-year-old Lily lives with her grandmother and is going to be the successor to the deadly martial art Sayama Hasin-ryu, which is transmitted for several centuries, from woman to woman. During the initiation ritual, Lily mysteriously falls in the past, 300 years ago.It is in an unknown forest near a small village, besides completely without clothes and some ideas on where to found itself. But her thoughts rudely interrupted by ninjas, who had taken out of nowhere and pursuing a pregnant peasant woman. She has no choice as to defend the poor girl.It turns out that the ninja working for Ms Okin insidious, which is engaged in the district of extortion, robbery and murder …

Chanbara Striptease; the title may not instantaneously give the viewer any clues as of what they might be getting into. Of course, if you happen to be a connoisseur of Japanese cinema, you might have come across the word “chanbara” and know of its association with samurai cinema (chanbara loosely translating as “sword fighting” movies).  Put that together with “striptease” and what you assumedly get is some sort of weird erotic fight-dance, right? Well, close. The original title Oppai chanbara, pretty much translating as “Boob Sword Fighting”, describes this cinematic experience more accurately. Taking its inspiration from the popular OneeChanbara videogame series and boasting a lead cast of several AV Idols including Sasa Handa and Mina Asa, it offers very little cinematically, but still manages to do a good job at keeping one entertained. 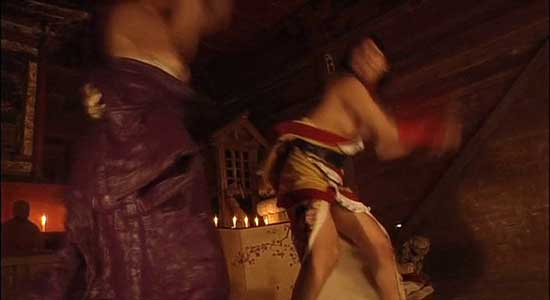 The story revolves around a young woman named Lili (Sasa Handa) who has just turned 20 years old and therefore is old enough to inherit her family’s secret martial arts technique “sayama hashinryu”; a technique so powerful that anyone who’s ever been in the receiving end of it, has met their untimely death there and then. During her initiation ceremony Lili mystically travels 300 years back in time to 18th century Japan, where she soon finds herself in middle of feud between a group of poor villagers and an evil geisha (Mina Asa) and her gang of murderous henchmen. As Lili takes it upon herself to help her newfound friends, she also discovers that the true power of her martial art comes not from her sword, but from the act of baring her breasts. And no, it’s not what you think. Her opponents do not simply get distracted by the sight of her lovely bosom (although that happens too). No. As a practitioner of sayama hashinryu, her magically glowing boobs emanate energy so powerful that it makes her invincible on the battlefield.  Unlucky for Lili, her new enemy, the evil geisha Okinu, also seems to hold the secrets of magic boob power and the two are destined to come together in a topless showdown. 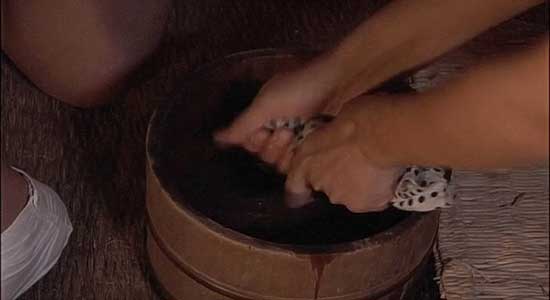 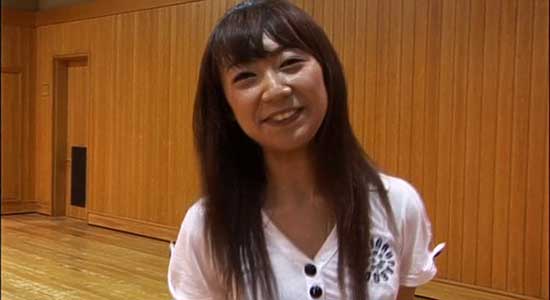 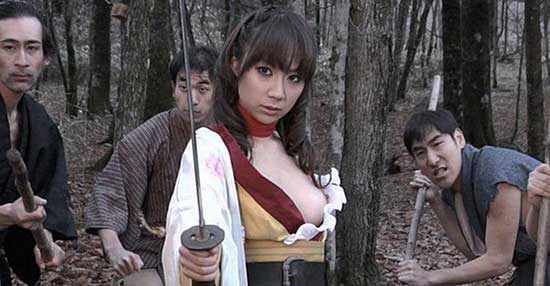 Chanbara Striptease is exactly as silly as it sounds. There are no great efforts made in trying to explain any finer points of the story, such as why does stripping down from the waist up make the followers of sayama hashinryu so powerful, or why do their boobs glow in various neon lights? It’s just the way things are and as a viewer you just have to go with it while the paper-thin story moves at lightning speed. Most of the hour and six minutes running time is of course taken up by the half-naked sword play, making you soon forget any niggles you might have had about gaping plot holes or other inaccuracies. And if that doesn’t do it, the ridiculously lengthy and quite possibly one of the most cringeworthy sex scenes in cinema history, should. And no, I do not exaggerate. 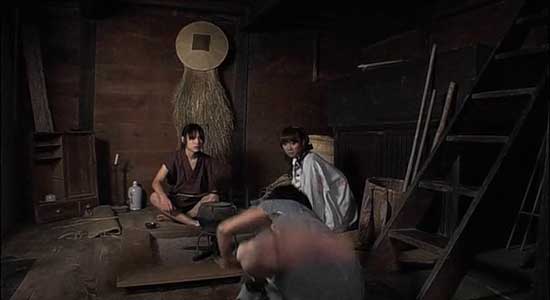 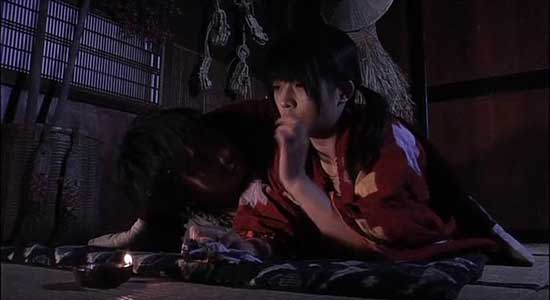 This thing absolutely rivals the god-awful love scene between Malin Akerman and Patrick Wilson in Zack Snyder’s 2009 superhero hit, Watchmen, only difference being that this is ever so slightly funnier, making it somewhat more bearable watch. And in case you’re still holding on to some notions of real plot or character development, Okinu and her hateful boobs should at very least put you in the right frame of mind. I mean, these boobs are so evil, so incredibly malicious, that the mere sight of them blackens the whole sky. If that doesn’t distract you, I don’t know what will.

Special effects are (of course) terrible all around and acting varies between completely overblown to nonexciting, adding to the overall hilarity of the film. The fight choreography isn’t likely to win any awards either as it is painfully obvious that the leading ladies in this feature had very little to no training in any kind of martial arts, let alone sword fighting, and any fight scenes involving the lovely ladies are a fabulously clumsy affair.  Some of the ninjas in Okinu’s service fare slightly better and seem to at least have some kind of basic understanding of some discipline or other, but these brief moments of actual martial arts are few and far between and the focus is soon directed back to what this film is really about: boobs. That’s what Chanbara Striptease is after all, all about and advertising it as anything else, would just be preposterous. 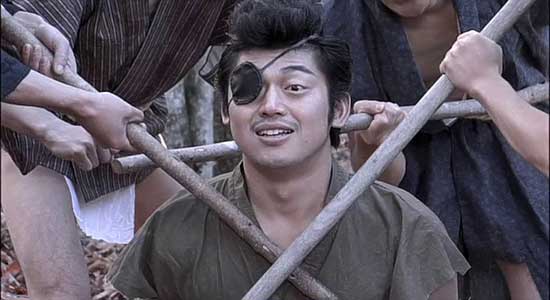