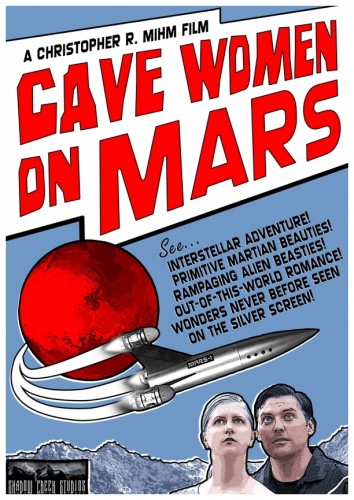 “It is the future. 1987. Great scientific advances have allowed mankind to achieve that which previously only existed in speculative fiction — space travel. But, on the eve of humanity’s first manned mission to the red planet, no amount of speculation could adequately prepare us for the unexpected discovery of…CAVE WOMEN ON MARS!”

This week’s desperate cry for attention is Cave Women On Mars (2008), the third retro-styled film from writer-director Christopher Mihm and his partner in crime, Josh Craig. It’s a full-blown space opera in the fifties mould that chronicles the first manned mission to the big red marble and the discovery of beautifully barbaric warrior women on, of all places, Mars! The movie promises adventure, romance and era-appropriate excitement, and might even deserve that M rating I have at the beginning of each episode of The Schlocky Horror Picture Show, making this the third time it’s actually been relevant – maybe. There’s romantic situations, stylised violence, mild language and some rather scary situations. Well, Doctor Who scary anyway – and old Doctor Who at that.

But I don’t want to give anything away. Suffice to say that this week’s film is well-written, brilliantly performed and true to the feel of the cinema classics that I normally discuss for your inexplicable enjoyment every week. Yes, classics! No amount of speculation could adequately prepare you for the far-flung future year of 1987 and the mind-blowing discovery of…Cave Women On Mars! Hmm – you’d think that once NASA announced a planet of prehistoric women there’d be no end of funding. I’m pretty sure that’s why Richard Branson is so desperate to get up there…

Of all Mihmiverse movies, I think this is the one that feels more like a tribute and less like a parody – which is not necessarily a bad thing. The crew of the MARS-1 spaceship lands on the monochromatic red planet to find its surface oddly Earth-like with an oxygen atmosphere, so they don’t even need space helmets. Lucky bastards! They also find a population of warrior women divided into two distinct tribes, which could loosely be described as naughty and nice, although it’s difficult to distinguish between them at times. One tribe dresses in black and the other in white, which helps.

Cave Women On Mars is the latest in the not-so-honorable science fiction tradition known as the Matriarchal, or ‘Female-Dominated’ society, a rather quaint and old-fashioned cliche usually represented by alien planets populated by warrior women ruled over by evil queens who are simply sexually frustrated. Many of these femdom fantasies can be traced back to H. Rider Haggard‘s adventure stories about She Who Must Be Obeyed, one of the most influential characters in modern literature, inspiring writers like Rudyard Kipling, Sigmund Freud, Carl Jung, Graham Greene, J.R.R. Tolkien, Bud Abbott and Lou Costello. That’s right, Abbott & Costello Go To Mars (1953) is one of the duo’s best-remembered films, distinctive in the fact that our heroes don’t actually make it to Mars, but land on Venus instead. Hey, it could happen to anyone back then – nowadays we have Google maps.

There are many other examples of such space-fluff, including infamous anti-classics like Fire Maidens From Outer Space (1956), Cat-Women Of The Moon (1953), and Queen Of Outer Space (1958), which recycled not only plots but props and costumes: The spacesuits from Destination Moon (1950); special effects from World Without End (1956); the rocketship model from the Bowery Boys Paris Playboys (1954); and the entire wardrobe from Forbidden Planet (1956). Oh, and the deformed Queen Of Outer Space looks like she’s been hit in the face by a banana cream pie. 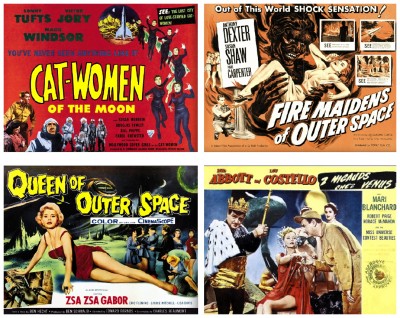 And television! Don’t get me started! It’s been used in classic Star Trek, Doctor Who, Space:1999, Fantastic Journey, Star Maidens, Otherworld and all the other Star Treks and Stargates with all their appendages and spin-offs! Could the cliche – or the costumes – be worn any thinner? This skeleton says ‘yes please’. Now that I have Cave Women On Mars’ position in crap film history firmly situated, I’ll discuss the perpetrators of said film, the third in Christopher R. Mihm’s Mihmiverse series which includes The Monster Of Phantom Lake (2006), It Came From Another World! (2007), Terror From Beneath The Earth (2009), Destination Outer Space (2010), Attack Of The Moon Zombies (2011), and House Of Ghosts (2012).

Versatile Josh Craig plays both young Captain Jackson and his own father, the rockin-and-a-rollin’ Professor Jackson, who you might remember dimly from The Monster Of Phantom Lake and It Came From Another World! while newcomer Dan Sjerven stars as dynamic Lieutenant Elliott. But that’s not important right now – the film is called Cave WOMEN On Mars, after all, and they’re certainly worth talking about. My old girlfriend Rachel Grubb is menacing as Hagra, the leader of the bad girls – which brings back fond memories – and Brooke Lemke is also rather menacing as Eina, the leader of the good girls. Hagra’s cohort Gorga is played by Emily Fradenburgh, and Eina’s friend Orla is portrayed by Alana Bloom. They all act above and beyond the call of duty – perhaps even necessity – which is perfectly suited to the old fifties look and style of the film. The only thing missing is half-a-century of film decay and a dodgy VHS transfer.

It may have been due to this overdose of tribal cheesecake that the film won the Cinematic Excellence Award from Rogue Cinema and received an Honorable Mention for Best Science Fiction Feature at the 2008 ShockerFest International Film Festival. One thing I love about these films from Christopher Mihm is that he uses a lot of stock music from those old fifties classics, which is just as important as the imagery when generating the right atmosphere. If you enjoyed tonight’s viewing experience, I’d recommend you either check-in to your local sanitarium, or head over to www.sainteuphoria.com to purchase the DVD.

“Why on earth would I buy the DVD when I can just record it off telly?” I hear you exclaim. Well, I’ll tell you why. Along with options for Esperanto, Mr. Mihm also adds subtitles to his films. If you choose to switch them on, you’re treated not only to the dialogue text, but also some really fun stuff in regards to the sound effects and other things. I really wish more independent filmmakers would take the time to add subtitles to their DVDs. They’re invaluable for picking up dialogue you otherwise might have missed and, having no ears as such, I always watch movies with subtitles on whenever they’re available. Speaking of missing body parts, be sure to return next week with a stout heart, an iron stomach and a titanium bladder for another head-melting romp through the garden of unearthly delights known as…Horror News! Toodles!