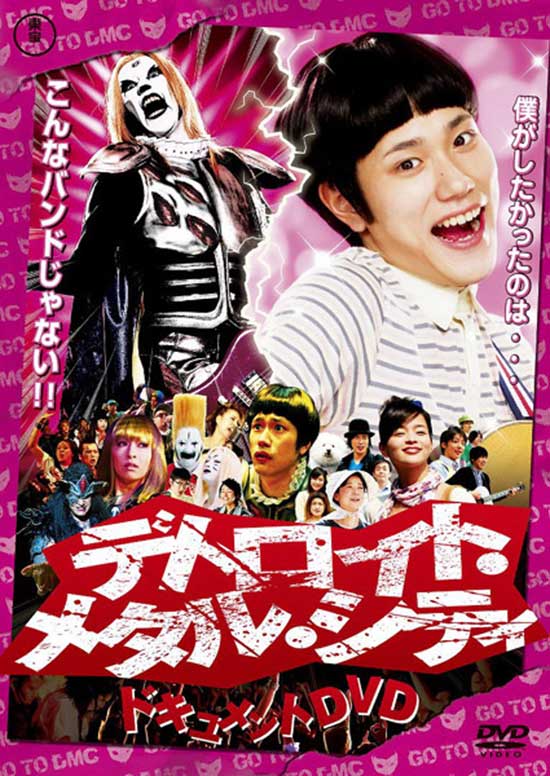 Soichi Negishi moved to Tokyo to chase his dream of becoming a musician playing stylish, Swedish-style pop. Instead, he finds himself leading the death metal band Detroit Metal City, or DMC, as the costumed and grotesquely made-up “demon emperor” Johannes Krauser II. Although he hates the role and the things he has to do as a member of the band, he has a definite talent for it. Adapted from the hit Japanese comic book by Kiminori Wakasugi, the movie follows Negishi’s antics as he tries to reconcile the two very different sides of his life and find out what it really means to achieve his dream.

You can tell a lot about a person by their taste in music. I prefer to think of myself as eclectic. If you should find yourself on a road trip with me, you’ll hear Fleetwood Mac followed by Die Antwoord, and finally “Hellfire” from Hunchback of Notre Dame before you manage to yank the AUX cord away from me. But it took me a while to come around to metal. Like many things I now love as an adult, metal terrified me growing up—it was scary music for scary people. Horror movies eventually developed my taste for it, guided by Rob Zombie’s sticky hands.

But it is definitely not for everybody, as demonstrated by how often it gets blamed in the media for all manner of sins. For those willing to explore, there are some lovely melodies and complex instrumentation to discover among all the screaming—not to mention its therapeutic benefits (see metal yoga). Sometimes it just feels good to massage out a bad mood to some dark lyrics and sick licks. Sadly, not everyone can see the good in metal, sometimes not even their own artists—such a bummer to learn that some bands are just sellouts, or they only pretend to worship Satan. But can you imagine learning that your favorite metal artist not only pretends to be something he’s not, but isn’t even a fan of his own music? 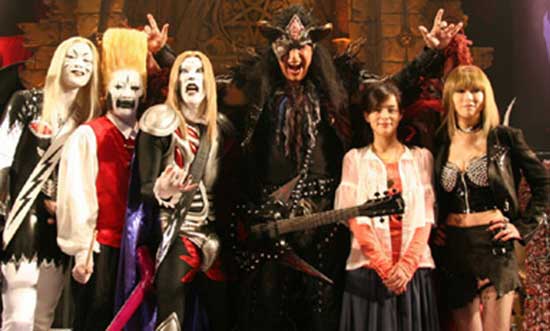 We meet Negishi as he departs from his country home to go to school in Tokyo. This farm boy is chasing big dreams in the big city–he wants to be a pop singer and live a “fashionable life.” At his friends’ urging, he submits his music to a record label. Unfortunately, his love songs don’t take off, but his talents do land him a job singing lead in a new band. What should be a dream come true for Negishi is his worst nightmare, as Detroit Metal City is hardcore death metal, complete with demonic alter egos.

Controlled by their insane metalhead manager from hell, the band draws a rabid fanbase with their spectacular stage presence and Negishi’s grimy lyrics. In his off hours, Negishi attempts to woo his college crush while trying to keep his music career a secret, as the sweet girl is repulsed by DMC and everything they stand for. Meanwhile, the band is breathing down his neck to embark on a tour to end all others, crashing other acts and asserting their dominance over the industry. This captures the attention of metal legend Jack Il Dark (played by Gene Simmons, natch), who challenges the upstarts to a rockshow throwdown as a sendoff for his retirement.

The movie is based off a popular manga, and it’s evident throughout the film how much better it would work as a series. One feature that feels like it was meant for something bigger is the dichotomy between nice-guy Negishi and his demon king persona of Krauser. Despite being a painted-up rapist pig, Krauser is infinitely more likable than the sniveling weenie we get stuck with for most of the film. Maybe Negishi’s reluctance toward the metal world would be more endearing if he were a protagonist whose idiosyncrasies slowly grew on you. Unfortunately, the movie is packed with neurotic freakouts played as comedy, the only relief coming in those all too brief moments when Krauser takes over. Any sympathy for Negishi’s plight of artistic truth begins to dull by the half-hour mark, and it begins to come off as some spoiled brat whining about his explosively successful music career not being within the parameters of his “dream.” 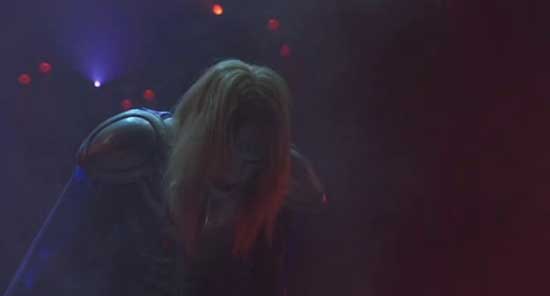 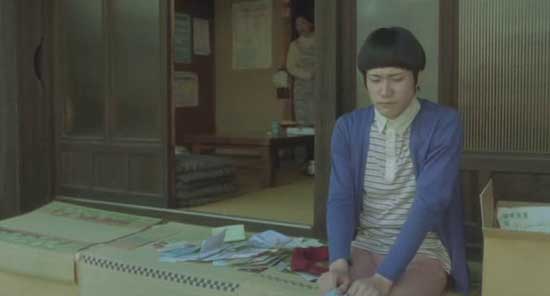 And let’s talk about Negishi’s dream, because he just keeps bringing it up. All of us have a dream inside of us, and dreams can come true…provided that you’re actually good at that thing you want to do. Negishi is not very good at pop music. Despite what his wide-eyed college buddies might think, his songwriting is better suited for a children’s outdoor concert than Billboard’s Top 100—all sugary lyrics and nauseatingly animated performance. To quote one of the metalheads, “It’s so sweet, I’m gonna puke.” It is painful watching Negishi on a street corner, his spastically happy face rocking to the strum of his guitar…his audience, a single stray dog. It’s possible that if he took that energy down just a notch, he could have a great career playing coffee shops—unfortunately, he is tragically disposed to making a fool of himself.

The real tragedy is that he can’t even recognize his own talent as a metal artist. Krauser is a performer with real stage presence and his dark lyrics reek of angst, and under the right circumstances he can even be a good role model—stay tuned for a delightful scene where he demonstrates how doing your chores better prepares you as a soldier in Satan’s army. Yet at every turn, Negishi runs screaming from the painted face in the mirror. 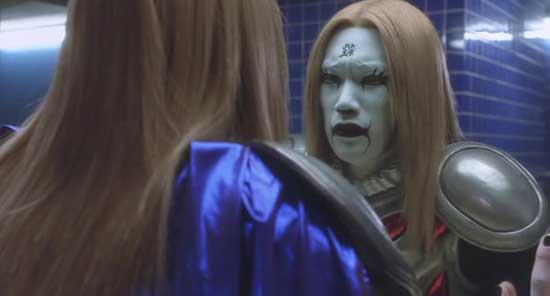 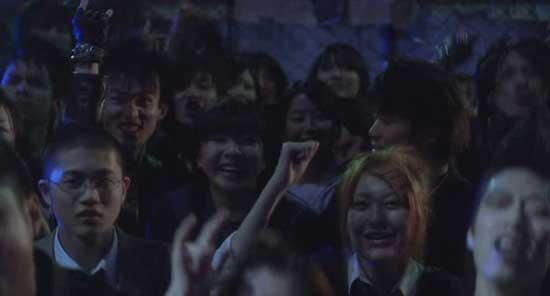 The manager, only referred to as Manager, is easily my favorite of this colorful cast of over-acting. She makes her entrance by kicking down the door and cackling like a maniac, all decked out in dominatrix biker chick deliciousness. She curses exclusively in English and punctuates every sentence by putting out a cigarette on someone’s forehead. She may be a shrieking predator most of the time, but deep down she has a good heart. She’s a true metal fan and she (somehow) sees real promise in Negishi. She sincerely believes that he is a talented songwriter and aims to groom him for heavy metal royalty as Jack Il Dark’s successor. When he confesses his dreams of becoming a pop singer and shares some of his music with the group, her response is to knee him in the balls, screaming “I can’t get wet to this!” She’s my hero, and I want a whole movie about her reign of shrieking sexual terror over an entire record label. 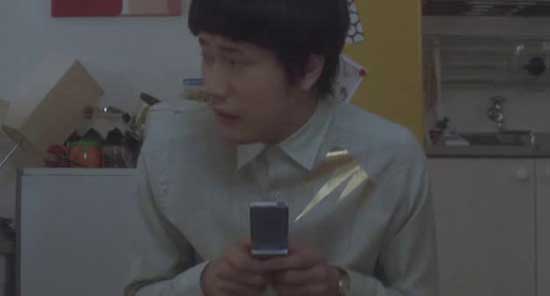 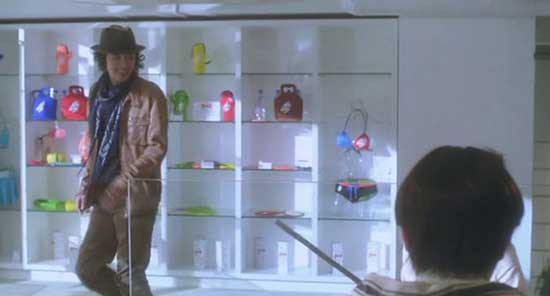 Detroit Metal City is a fun little movie. The metal soundtrack is pretty great aside from the hideous lyrics, and the cast seems to be having a ball with their campy performances. If you can stomach the frequent griping of a grown man that whines more than a toddler, the rewards of Negishi’s transformation into Krauser are quite worth the headache. The movie makes jokes at the expense of both pop and metal while paying loving homage to both, and it’s hard not to be charmed by the idea of a rock god so full of angst he hates his own music.