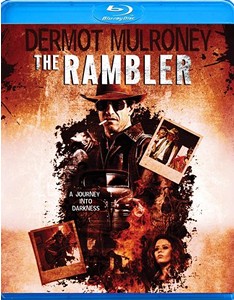 A quiet drifter leaves prison, finds home on the road.

With a title sounding more like a western, you might expect to see Clint Eastwood leading the trail in this one. However wonderfully abstract things sometimes come in small packages. Rather, the film takes a direction that mirrors films like Martin Scorsese’s 1985 “After Hours” or “The Big Empty”, of which has a single individual who ends up meeting all sorts of characters and situations over the course of his rather odd adventure. “The Rambler” keeps things at a tropey melodramatic ground level with Dermot Mulroney taking the lead as …well, “The Rambler“, a loner taking life on the road.

Beginning with his release from a prison due to good behavior, his cold and nagging white trash wife Cheryl (Natasha Lyonne) welcomes him home to a gaggle of odd friends who seem more in need of help than he does. This celebration of rednecks proves to be more of a distraction than anything as our “Rambler” tries to settle in. A quick job at local pawn shop and a second chance soon begins to wear thin as our Rambler takes to the road in search of a new life.

Well, life on the road is cursed…

This begins our real adventure…………

Our traveling road cowboy sports dark shades which tend to stay on his face thru most of the film. Not one for much talking, he seems to just go with the flow despite how weird, disturbing, or unsettling it may be. Along the path he meets a girl (Lindsay Publisher) who tends to be his imaginary love interest at times and a phantom at others She appears several times in the film which never really makes her appearance quite clear as to who and why (or to what her real purpose is). Rambler also meets a Scientist (James Cady) who insists on trying his device on new subjects. Even after their heads explode in almost every instance, our Rambler appears to shrug it off and take things as they come. Rambler gets himself into a “fight club sparring tour” for a short while en route to see his brother Bob and join him on his farm. Lost you yet?…dont feel bad, this is how this film rolls.

The characters in the film tend to stay a bit jarring if only for their stares and silence to the occasional odd displacement of reality. This aspect tends to run the course of Lynchian styles, but in the case of “Rambler” they feel more just like nightmares and daydreams. If one were to really analyze this film it would be under the statement of “a film with no direction, plot, or linear resolution” 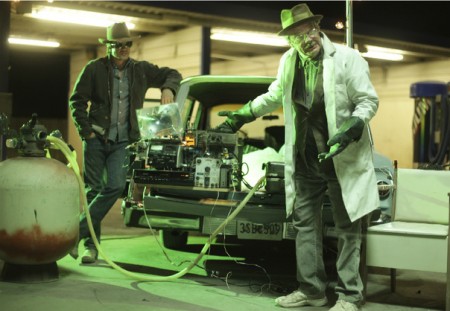 “The Rambler” turns out to be intentionally “culty”. To be quite honest I’m not really entirely sure where and what all the connections were supposed to mean. Director / writer Calvin Reeder has surely taken a que from the club of Lynchian style films, but at the same time “The Rambler” is neither entirely Lynchian or entirely not. In fact after watching this film, which come to mind does tend to wear heavy after a while , I’m sure most will look to the Internet to try and grasp what Calvin Reeder was trying to tell us. One of the problems which also is its attraction is that it becomes too dreamy at times making most of it a surreal experience much like waking up from a very odd fantastical but dreary hallucination. 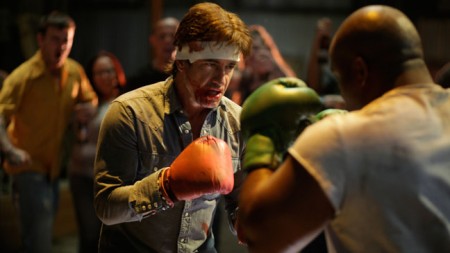 “The Rambler” is sure to fall right into the category of cult films since it really doesn’t fit anywhere else. Our focal subjects misadventures are exactly “that”, wound up in the tales of the road. While the film almost begs to be analyzed and interpreted it is rumored that the film was never intended for either and just exists on its own accord. In other words, haunting and weird for the sake of being. 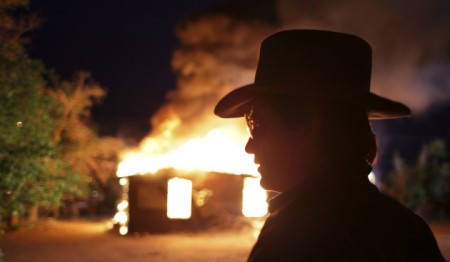 The takeaway here is simply this………the film “The Rambler” does have moments that range from dark, to horrific, to funny to adventurous. It does try and keep interesting as long as it can. Consumers should ultimately run from this one as you’ll surely be confused and disappointed. Film lovers who appreciate the occasional odd experience should give it a go just to reaffirm everything I’ve stated in this review. Dermot Mulroney is perfect for the part, I just wish it had a purpose.