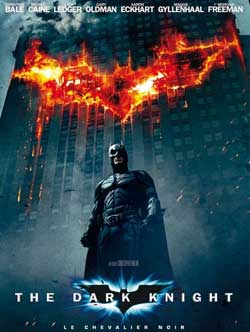 When Batman, Gordon and Harvey Dent launch an assault on the mob, they let the clown out of the box, the Joker, bent on turning Gotham on itself and bringing any heroes down to his level.

“The Dark Knight” was the perfect on screen adaptation of the Batman lineage. Christian Bale held his ground continuing in his Batman / Bruce Wayne role AND like the Tim Burton version saw the perfect performance of Heath Ledger as the younger bizarrely demented “Joker”. Far removed from the zany antics of the Nicholson version, this Joker was indeed dark and troubled. It was a one time performance by Ledger that would go down in history as the actor’s greatest (and last due to an unfortunate death), “The Dark Knight” had pizzazz, flavor, and the right combination of Gotham city elements. If that wasn’t enough this rather lengthy film also managed to induct Aaron Eckhart in as the horrifically deformed 2-face (to hit us twice as hard!) 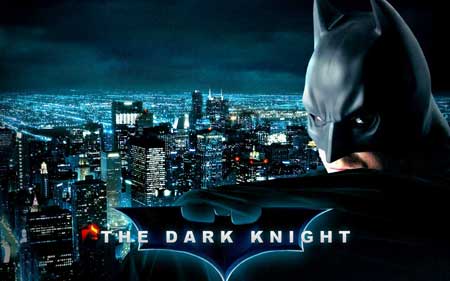 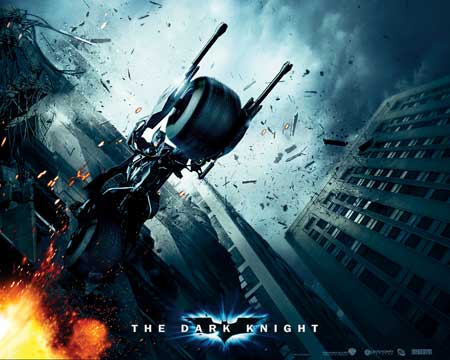 I find myself years later (and having watched this film no less than 4-5 times already) writing a review long over due. Maybe it was the feeling that everyone saw “The Dark Knight ” and thus it never needed TO be reviewed. But for me it’s just a guilty pleasure that enables me to indulge in another sitting just for the purpose of running thru the motions once again. This film would be the 2nd of a trilogy for Christian Bale. (hoping for the record, he doesn’t stop there though). The Knight is indeed dark and fully aware of his place in the world.

Easily among the greatest superhero films of all time, if not “the” best, this Christopher Nolan directed-movie is quite the epic tale. The film wraps up over 152 minutes of Gotham’s finest giving us several layers deep into the lore of Batman, the criminal circuit of Gotham and the making and breaking of heroes to the beat of one very insane “Joker” (not to mention the birth of the morally juxtapositioned 2 face). 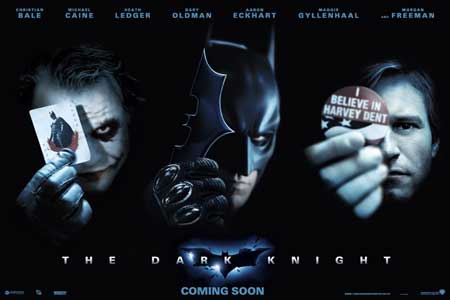 There is so much going on here that you have to take the complete journey to enjoy all the intricacies of this ride. Beginning with the Heath Ledger version of Joker, we find a mastermind planner who’s calculating outcomes directly conflict with his cold demented nature. Killing others comes as easy as a walk in the park falling to the wayside of his pretentiously cruel nature and need to dominate the crime circuit. Though surprisingly enough, the typical needs of crime are only a form of entertainment to this mastermind who burns money as easily as he takes it and finds every possible way to flip flop the rules to the effect of having none himself.

Heath Ledger provides a masterful performance that could only arise from method acting, one that makes you wonder at what cost to his own psyche? Christian Bale plays the darkly ominous Batman filled with a passion for protecting the city but also to the effect of his own demons that brood within. Guided by his caretaker “Alfred” (Michael Caine), he spins life to his own needs with a seemingly endless pocket book and a secret life beneath the extravagant one. Though we never really truly know if Bruce Wayne is the real decoy here to his true nature which can only be expressed wearing leather armor suiting and advanced weaponry. 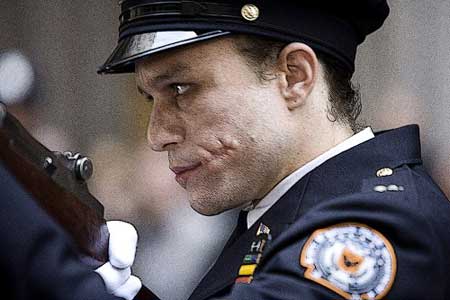 The beauty of this film is that its not beautiful. We dive headlong into the dark roots that spawn Gotham’s finest with this instance being the creation of a criminal with no apparent roots, background or identity except for his sinister assumingly self carved grin. Joker is an enigma, one that just simply appears and executes an agenda.

Aaron Eckhart takes a lead role as the acting city’s savour Harvey Dent, intent on ridding the street of crime the old fashion way, free of corruption and brimming in moral code. Along for this cause is (Gary Oldman) police chief Gordon (and soon to be commissioner Gordon). Dent becomes a hero even to Batman’s standards riding his white horse among a gray town with even darker things lurking in the shadows. 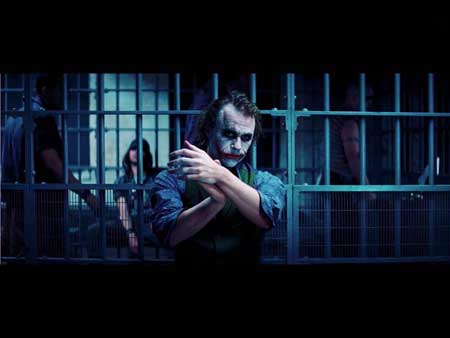 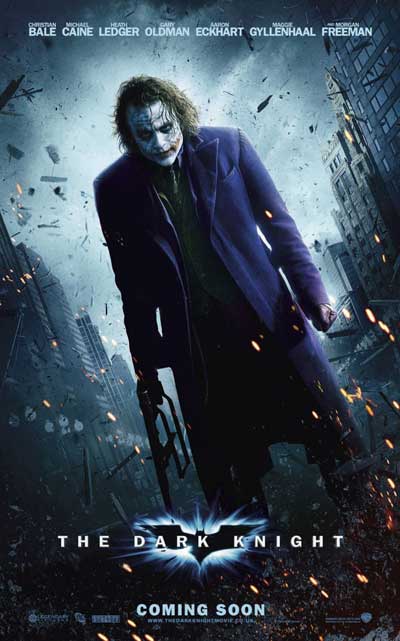 Now my only real disappointment here was the choice of Maggie Gyllenhaal to play the role of Rachel. While Maggie Gyllenhaal is fine in the acting department, I never could grasp the fact that Bruce Wayne and Dent were so head over heals over her. Often in scenes she looked worn and ragged never really living up to the look that Katie Holmes brought to the screen in the first of this trilogy. As Rachel Dawes, she seemed like a quick replacement rather than a first choice to embellish the role. As fine as this film was, I thought this to be the only real hole to the whole adventure realization.

Let us not forget Lucius Fox (Morgan Freeman), a secondary Alfred to Bruce Wayne. Fox ran the ship at Wayne Enterprises and kept the doors open. He also has a knack for obtaining cool overseas war vehicles and body armors that make Batman the superhero that he is. Perhaps Batman falling from buildings more than once and landing without breaking his neck was bit far fetched even with body armor, but as fans of the screen, we never let those details slow us down.

“The Dark Knight” was the 2nd entry into the Dark Knight saga and by all standards the best of the breed. The film was highly successful for the DC world and the box offices ranking it in as one of the best superhero films even made. There is a great bit of detail behind the scenes as well with much of Heath Ledger’s performance being born from a isolated month of preparation that culminated in the character’s tone, voice, and persona. The role was forever sealed with an unfortunate real life accidental prescription drug overdose that made headlines. The film would go on to win awards and the hearts of moviegoers across the globe. Heath Ledger was forever immortalized in his Joker role, the finest of his career. 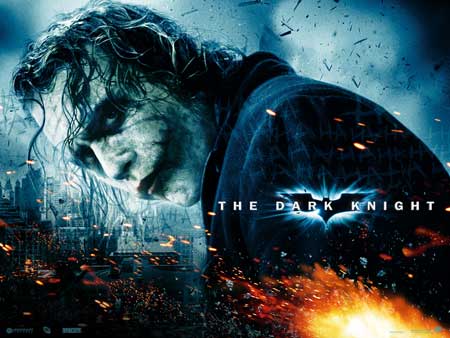 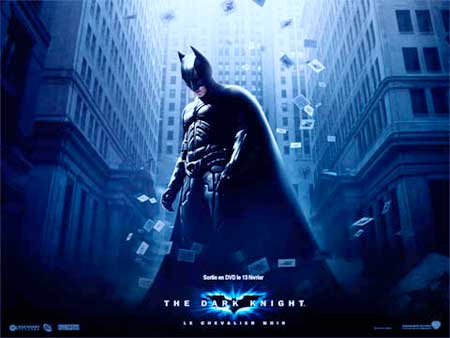 The movie “The Dark Knight” flows over several dynamic portions that combine action, drama, and high tech Fx work. But beyond the cool toys and heroic acts, it also tends to get under your skin with brilliant character interplay.

The box office returns on this movie were among the highest grossing ever with much of its fan base returning to multiple showings providing even more of a boost in sales. The film was announced as the “highest grossing film of 2008” and the 2nd highest grossing superhero movie of all time. There really isn’t anything bad you can say about the film. If you are a newcomer then you deserve to experience it on your own.

“The Dark Knight” is a searing masterpiece.